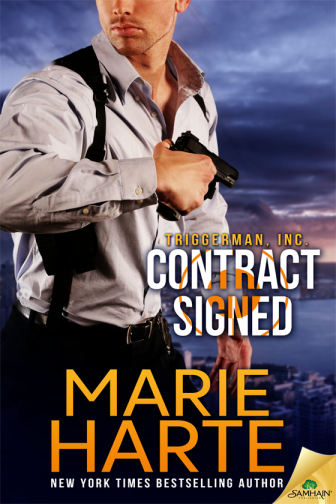 Noel “Ice” Cavanaugh’s method is foolproof. Get in, do the job, get out, melt away without a trace. Chill out until his next mark is assigned. Neat. Tidy. No mistakes.

This time, though, something isn’t right. Two somethings. First a random attack that feels not-so-random. Then he discovers someone’s left a baby on his doorstep with a note claiming it’s his. And the sexy neighbor who found the boy first has too many questions in her eyes to ignore.

When her handsome, mysterious neighbor suddenly asks her out on a date, Adeline Rose has suspicions he’s fishing for “help” with his bundle of joy? By date’s end, she’s convinced NOel’s just as distant as he seems until a scorching goodnight kiss ends with sex against the nearest wall, the heat between them burning away all thoughts of careful.

Now Noel has more than one problem on his hands. Splitting baby duty between three badass assassins, figuring out how to fit more time with Addy into his no-room-for-error schedule and keeping both of them safe from the danger he’s increasingly sure has followed him home.

Warning: Beware a killer with a heart of gold, a baby who needs constant changing, and unrequited love that’s actually quite requited.

He sighed. “I would have talked to you sooner but I’ve had my hands full. I’d like to go out again.”

She hugged Noel Jr.—as she liked to think of him—tighter. He grabbed her hair and cooed, no longer upset while she rocked him against her. “By go out, you mean…?”

To her delight, Noel flushed and shoved his hands in his pockets. He wore a dark green sweater and jeans that looked as if they’d been pressed. She had never, in the two years she’d known him, seen him in anything resembling slovenly attire.

“I mean you and I could go out to dinner again or see a movie. Maybe take a hike.”

“Oh.” She was disappointed and shouldn’t have been. But God, just thinking about how amazing he’d been woke her ovaries from their hibernation.

“I mean, sure, we could sex it up in a bed next time, but I thought you’d like to get to know me better first. You know, so that you feel better about being with such a cold, unemotional man,” he delivered in a remote voice.

“Ha ha.” At least, she thought he was joking.

The gleam in his dark brown eyes and slight quirk of his lips showed he was. “Or are you a fan of wall sex instead?”

She covered the baby’s ears. “Shh. He’s too little for this talk.”

Noel snorted. “Trust me, that kid’s no innocent. He’s shoved all sorts of things into his mouth all day. Including one of my favorite silk ties. He’s been pooping and crying all day long.”

For all Noel’s harsh words, he stroked the baby’s head with a tenderness that should have surprised her but didn’t. She noticed the calluses on his fingers, in particular on his middle and forefinger and thumb. From lifting weights, maybe?

Contract Signed was a great start to the Triggerman, Inc. series!
3 badass assassins, an unexpected baby, a sexy neighbour, intrigue, mystery, action and secret & spies, along with a series of things that keep getting in the way of our main couple getting it together all lead to a really great, engaging story!

Noel Cavanaugh was nothing like Adeline Rose expected – not that she knew much about her sexy neighbour, even though she’s been lusting over him for the last couple of years.
Noel comes across as cold and uninterested whenever Addy has come into contact with him in the past… turns out there’s more to the man than meets the eye. He had been keeping tabs on his nosey little neighbour for a while and was more interested in her than she’s ever imagine! I really liked him. He was protective of Addy, as well as the baby (whether it’s his or not) and would do anything to keep her safe.

Addy was funny and likable. Outgoing and openly friendly, she was the complete opposite of the well named ‘Ice’, but they were great together!

Add in Jolene, who is Addy’s best friend, and Deacon and Hammer, who are 2 assosiates/friends of Noel, and you have some craziness and laugh out loud moments as well as a nice introduction to the second book in this series!

There was the expected elements of humour, heat and romance that I’ve come to expect (and look forward to) in Marie’s books. I loved this read and I can’t wait to find out what happens next with the sexy assassins….

Award-winning author Marie Harte has been writing professionally since 2005. She’s both a NY Times and USA Today bestselling author and has written over 100 books and counting. Marie writes books with heat, humor, and character. She writes independently and for several publishers, to include Sourcebooks and Samhain. Though currently writing contemporary romance, she also writes paranormal and romantic suspense. Before turning to writing full-time, she earned a B.A. in English from Pennsylvania State University and spent several years in the United States Marine Corps as a communications officer. Marie currently lives in Central Oregon with her family. There’s nothing she likes more than finding a good book to read and a great cup of coffee to drink.