It took 32 seconds to end his career.
But it only took 1 to change his life.

Thirty-two seconds. That’s how long it took for Delon Sanchez’s life to end. One minute he was the best bronc rider in the Panhandle and the next he was nothing. Knee shattered, future in question, all he can do is pull together the pieces…and wonder what cruel trick of fate has thrown him into the path of his ex, the oh-so-perfect Tori Patterson.

Tori’s come home after her husband’s death, intent on escaping the public eye. It’s just her luck that Delon limps into her physical therapy office, desperate for help. All hard-packed muscle and dark-eyed temptation, he’s never been anything but a bad idea. And yet, seeing him again, Tori can’t remember what made her choose foolish pride over love…or why, with this second, final chance to right old wrongs, the smartest choice would be to run from this gorgeous rodeo boy as fast as her boots can take her.

Sortin’ the Herd—How a Real Cowgirl Cuts Off the Strays 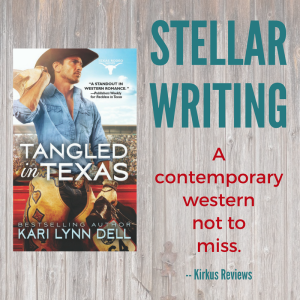 Nowadays pretty much anyone can pop online and order up a full set of cowboy duds to wear to their nearest rodeo. Which I think is awesome, by the way. The companies that sell those hats, boots and peart snap shirts are also the sponsors that keep my favorite sport in business. I’d be thrilled to pull into the next rodeo and see a Stetson or Resistol on every head, and Justin or Ariat boots on every pair of feet. But it also makes it harder for a girl to tell…which are the real cowboys, and which are just playing the part?

Luckily, it doesn’t take long to sort off the bleacher buckaroos. I’ve put together a few never-fail tips to help you identify the wanna-be’s, like this one:

He shows you his scar and waxes poetic about the bucking bronco that gave it to him. Cowboys don’t have broncos, unless they have purchased a boxy Ford vehicle which is now at least twenty years old and has been repurposed so they and at least three traveling partners can bed down in the back, along with all their gear and a beer cooler. At the rodeo—and sometimes, unexpectedly, on cold, windy days at the ranch—we ride broncs. Or bucking horses. Or “you dirty rotten—”…um, on second thought, probably not an appropriate word for this post. But infinitely more cowboy than calling them broncos.

Take note of the word in bold face above. When you’ve finished reading about Tangled in Texas and enjoying the excerpt below, come on over to my blog, Montana for Real, to find the rest of my helpful hints. Collect all the of key words and you’ll get a free download of the unofficial soundtrack to Tangled in Texas.

Tori hunched her shoulders against the chilly breeze and walked around to the side of the building. The staircase was metal, narrow and steep. No way would she let Delon go up those alone. She went back to find him maneuvering his leg out of the car. He hissed in pain when his toe caught on the doorframe. She stepped closer and offered a hand. His fingers were warm and strong as always, but the clasp of his palm against hers felt different.

The calluses were gone. Those hard ridges on the fingers and palm of his riding hand that had been such a raspy, delicious contrast to her most sensitive spots. The nape of her neck. The inside of her thigh. Her nipples. She remembered how he’d smiled when he realized what it did to her—a dangerous smile full of wicked promises.

She let go so abruptly he lost his balance and had to grab the open car door to keep from toppling backward.

And fell face first into another hormonal bog. Damn. She really had to get a hold of herself, before she went totally bonkers and tried to get a hold of Delon instead. That would be bad. Because he was her patient—and he was her past. They were both, to paraphrase his words, fucked up. Two broken halves couldn’t make a functional whole. Could they?

She stepped back, but fell in beside him as he limped around the side of the shop. “Those stairs are treacherous.”

“I doubt you were half tanked before. So rather than stand back and watch you roll ass over teakettle down a flight of stairs, I’ll just follow you on up.” His expression went mutinous, his bottom lip poking out, and she laughed outright. “Wow. I bet that’s exactly what Beni looks like when he doesn’t get his way.”

His scowl dissolved into a weary sigh. “It’s been a long day.”

“Tell me about it.” Beginning with her father’s divorce bomb, but she wasn’t thinking about that now.

Delon grasped the stair rail and stepped up with his good leg, then brought his sore leg level. Tori let him get two steps above her, then put her hand on the railing behind his, her upper body canted forward so she had leverage if he started to sway. Her position put his butt directly in her line of sight. Dear Lord, that was one nice butt. She yanked her gaze away, to a trio of trucks parked in a row alongside the shop, the chrome and polished paint of the tractors gleaming under the security lights.

A familiar fascination tugged at her sleeve. Big rigs had a sexy mystique, like modern day stagecoaches, the drivers perched high and proud, all that horsepower at their command. She’d had fantasies about Delon dragging her into one of those sleepers. Carrying her off to crisscross the country, just the two of them on an endless road trip, town after town of strangers who didn’t know or care who her father was. She gazed at the nearest black one, streamlined as a stealth fighter. Climb on in, it whispered. I’ll take you anywhere you want to go.

Her head rammed into Delon’s elbow as he stopped on the landing. When she stumbled, he grabbed the back of her coat and hauled her upright as easily as if she was Beni’s size.

“Good thing you came along to keep me safe,” he deadpanned, then raised his eyebrows. “Were you staring at my trucks?”

At first she thought he said butt, and her face went hot, before she realized he’d caught her checking out the semis. “They’re pretty.”

“Pretty.” He spit the word out in disgust. “Next thing, you’ll call them cute.”

She drew herself up, offended. “Cute is not in my vocabulary.”

“But you do have a thing for trucks.”

“It’s okay. Lots of girls do.” His smile was sly, his eyes gleaming with something wild and dangerous.

She suddenly realized they were face to face on the landing, their bodies touching, if you didn’t count the five layers of clothes between them. His hand was still on her shoulder and his fingers tightened fractionally, as if he would pull her even closer. Her heart sprouted legs and launched into a frantic gallop. Oh God. What if he kissed her? She wasn’t ready for that. Was she? If he leaned in and put his mouth on hers, would she shove him away, or devour him?

Kari Lynn Dell is a ranch-raised Montana cowgirl who attended her first rodeo at two weeks old and has existed in a state of horse-induced poverty ever since. She lives on the Blackfeet Reservation in her parents’ bunkhouse along with her husband, her son, and Max the Cowdog, with a tipi on her lawn, Glacier National Park on her doorstep and Canada within spitting distance.
Her debut novel, The Long Ride Home, was published in 2015. She also writes a ranch and rodeo humor column for several regional newspapers and a national agricultural publication.

5 print copies of Reckless in Texas