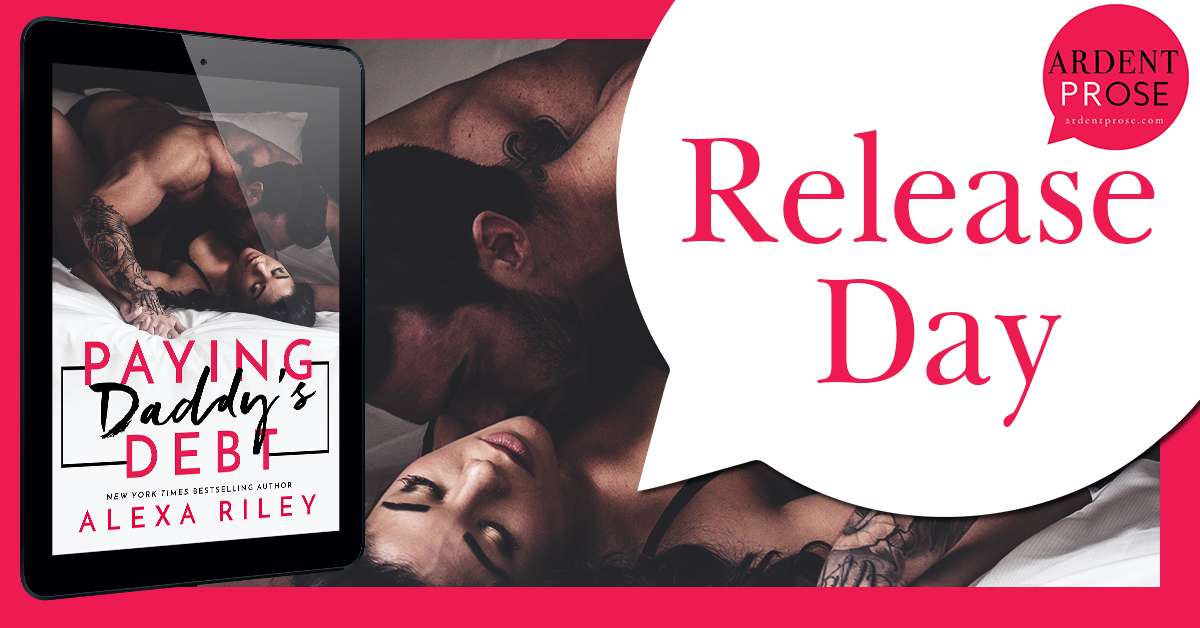 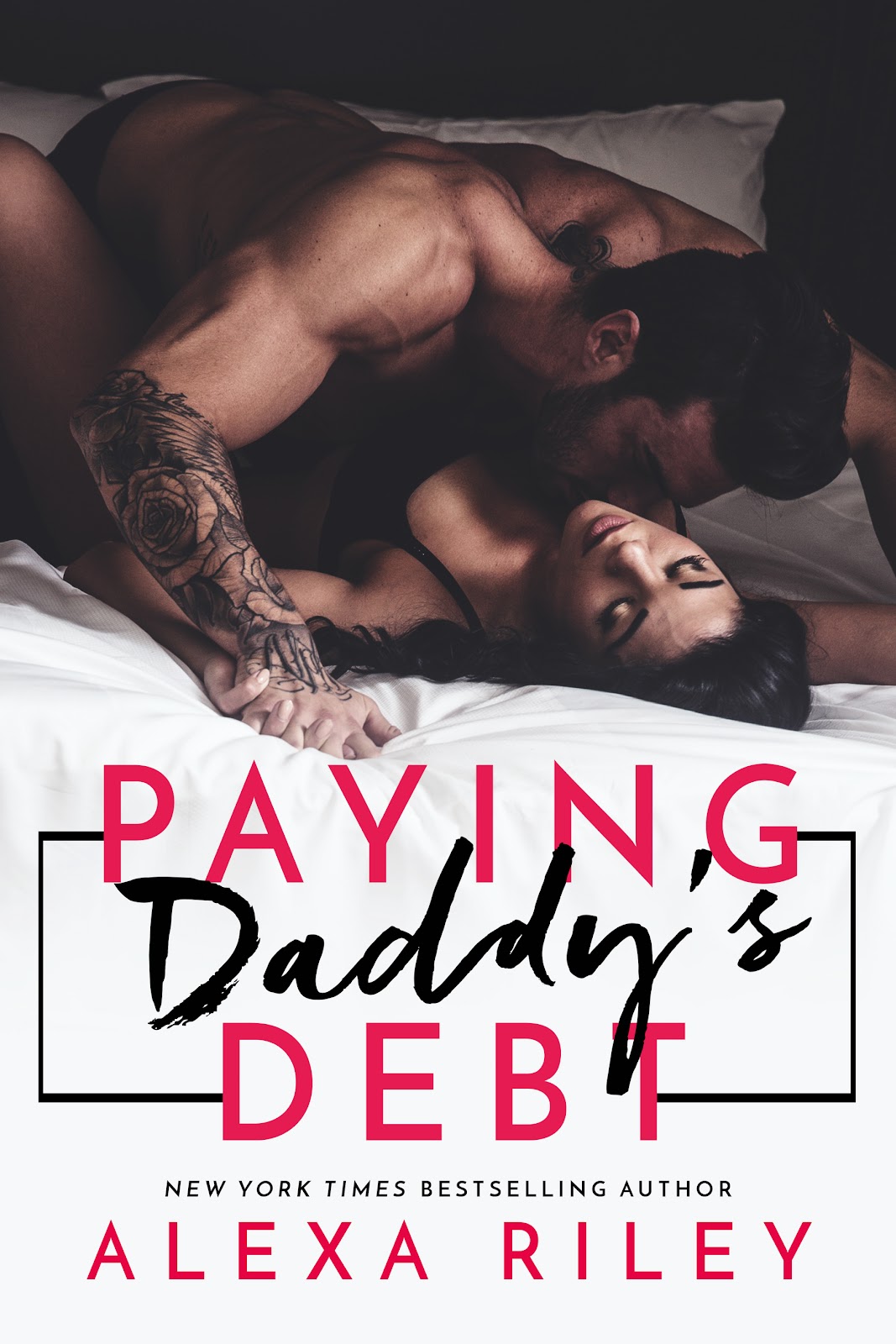 When Ash Carpenter imagines a schoolgirl, the image doesn’t match her. She wears long skirts that are sort of frumpy. Her bulky sweaters hide her shape, and her hair is always in a messy bun. Her tennis shoes are clunky and worn, and there are runs in her thick tights. Her dark-framed glasses hide some of her face…but not all of it. Because he’s caught sight of those ice-blue eyes, and they’ve pierced him to his core.She walks by his office every day, but one afternoon she’s missing. It’s then Ash finally decides he’s tired of waiting and it’s time to collect what he’s owed. She’ll come with him, because there’s no other choice. She’ll pay her daddy’s debt any way Ash sees fit.Warning: Oh, honey, this is about to get filthy. If your delicate sensibilities can’t handle the dirty, then step aside for those of us who can. It’s quick, but it’s just the right length, if you know what I mean. *slow wink, elbow nudge, goofy snort* 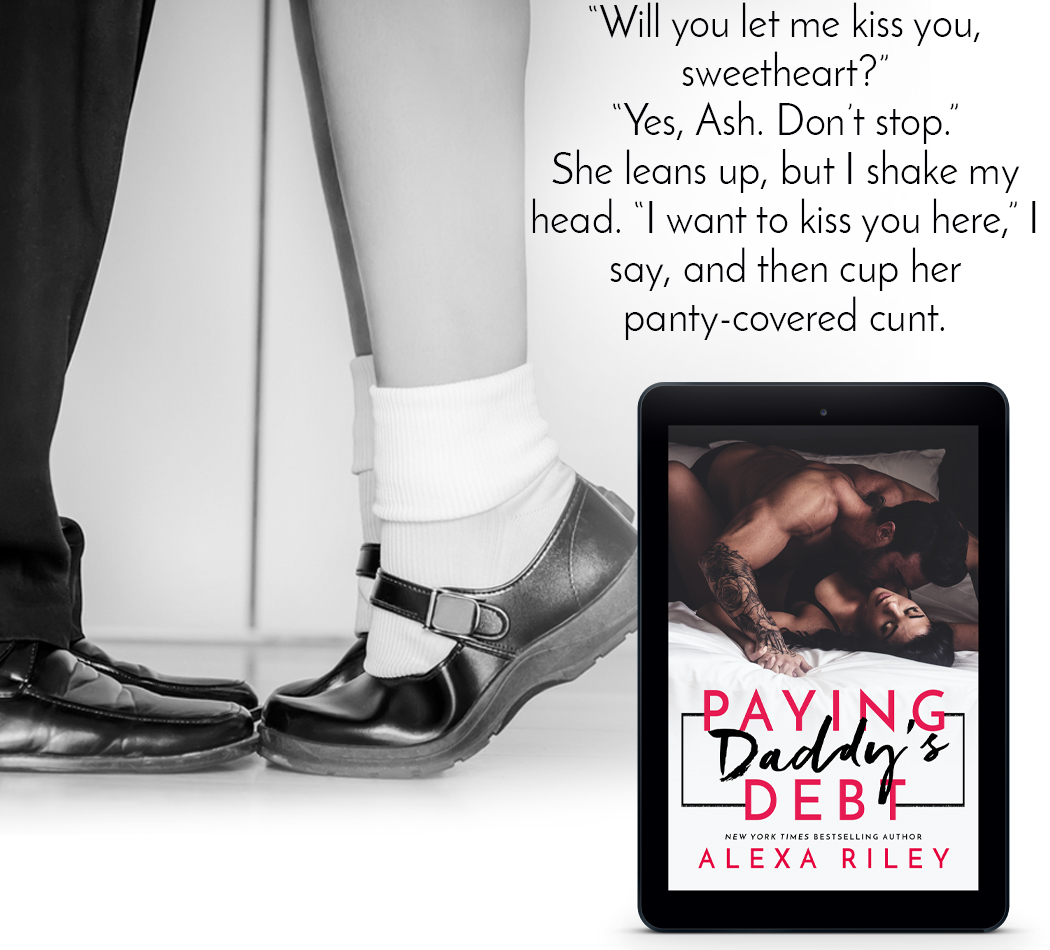 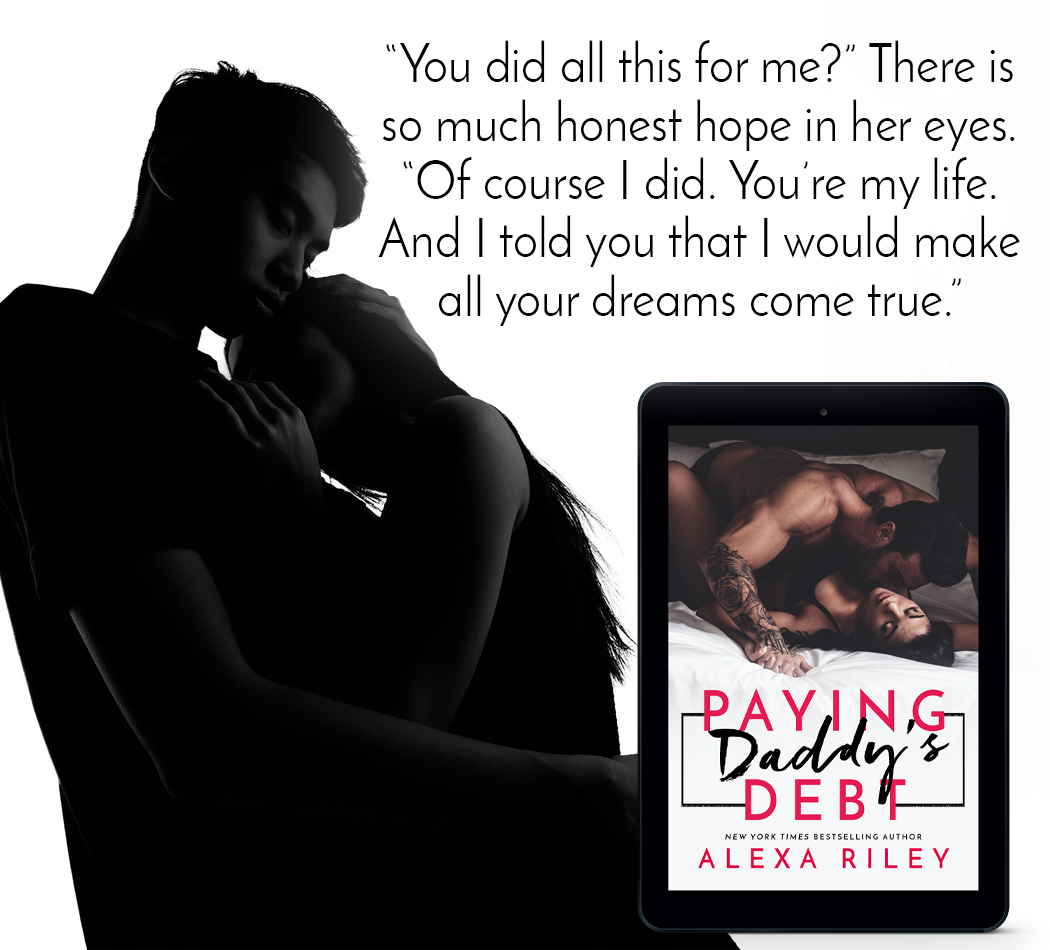 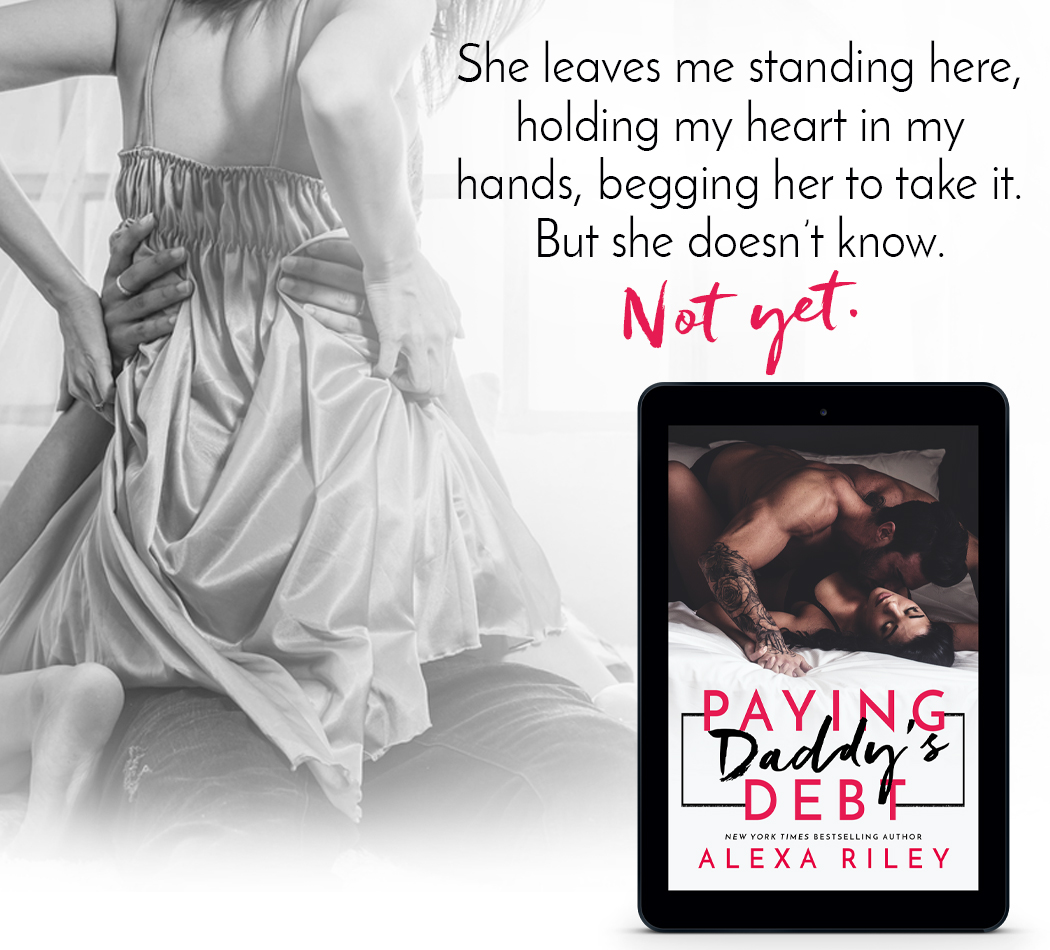 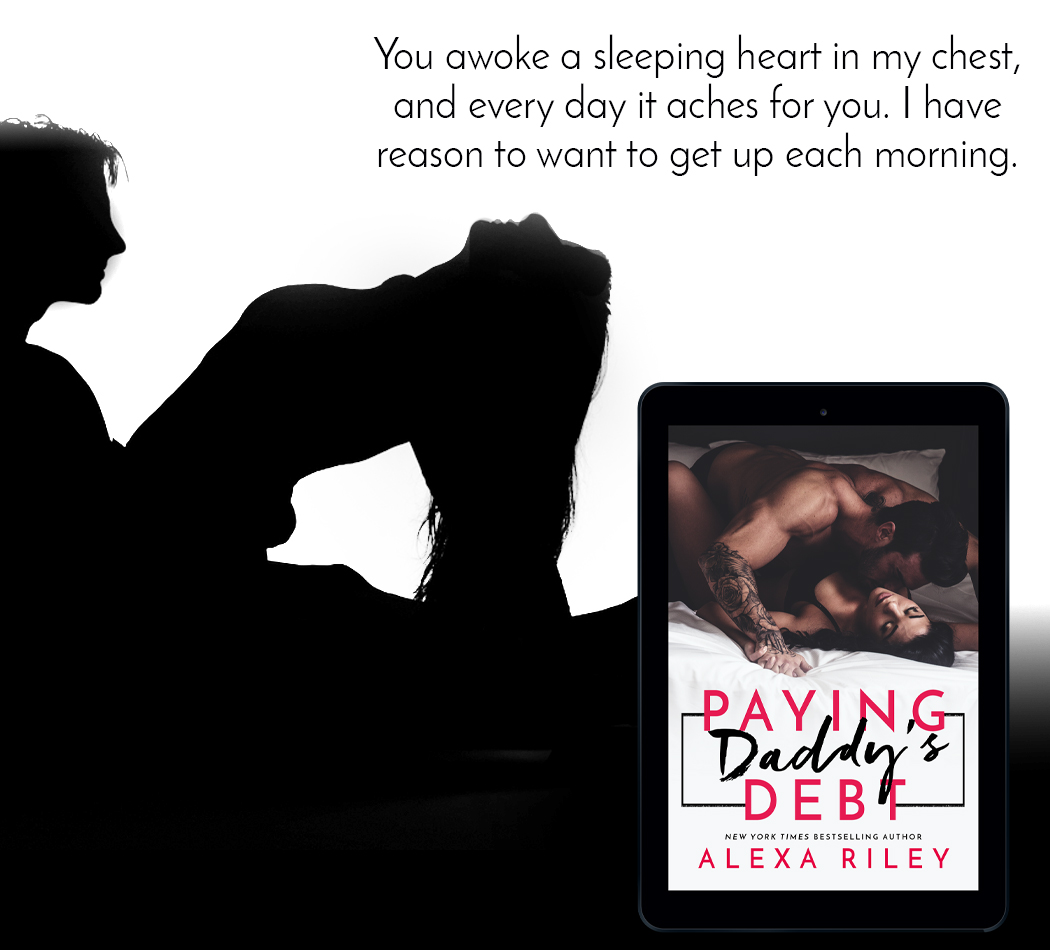 Alexa Riley is two sassy friends who got together and wrote some dirty books. They are both married moms of two who love football, donuts, and obsessed book heroes.

They specialize in insta-love, over-the-top, sweet, and cheesy love stories that don’t take all year to read. If you want something SAFE, short, and always with a happily ever after, then Alexa Riley is for you!
Author Links
Twitter       Facebook      Website       Goodreads       Amazon Page     Instagram

COVER REVEAL ~ Pieces of Me by Shiloh Walker

Nobody knows that better than Shadow Harper. It seemed like a dream come true when a rich, suave older man noticed her during her second year of college. Stefan Stockman seemed to love her obsessively. He came into her life and swept her off her feet, seduced her, married her…and then slowly, eventually, that dream come true became a living nightmare.
Now, three years after she finally escaped him, she’s trying to put her life back together. Haunted by memories, struggling with post-traumatic stress, she spends most of her time locked away in her home on Pawley’s Island, a small town on the South Carolina coast. Her rare moments of joy come from her trips to the nearby beach.
She compulsively checks the locks on her doors, makes sure she has her cell phones—five of them—and if she misses something on her schedule, it throws her into a panic.
When she accidentally leaves a sketchbook on the beach, an anxiety attack seems imminent. Her art has become her salvation, her sanity, and losing even one sketch is like losing a piece of her soul. When she returns to hunt for the sketchbook, already fearing it’s gone for good, she’s surprised to find it still sitting there, saved by a sexy fellow beach lover— the mysterious Dillian Jenkins.
He’s brash, bold, brutally handsome…and gentle. He’s the exact opposite of the man who’d tormented her for years, and Shadow finds herself slowly, almost reluctantly, falling for him. Even obsessing over him.
When her ex-husband once again intrudes on the happiness she’s finally discovering, Shadow turns to Dillian. But will she find shelter
there…or another betrayal?
Obsession can be deadly …

Shiloh Walker is an award-winning writer…yes, really!
She’s also a mom, a wife, a reader and she pretends to be an amateur
photographer.  She published her first book in 2003. Her latest suspense,
The Right Kind of Trouble, released in August 2016 from St. Martins.
She writes romantic suspense
and contemporary romance, and urban fantasy under the name, J.C. Daniels.

Harlequin is offering one (1) lucky winner a $25 Amazon Gift Card!
To enter, simply click the Rafflecopter link below:

The Poseidon team are hard-bodied, fiercely competitive navy SEALs. But when a sensitive mission goes disastrously wrong, three of the team’s finest will have to trust their hearts and instincts to uncover the truth…

“No man left behind” is inscribed in the DNA of every SEAL and Lieutenant Diego Torres is no exception. But with a team member killed—and the body missing—Diego’s honor is sorely tested. Now his career and reputation are on the line, and a traitor is hiding among them. Diego wants answers…and only one woman has them.

Single mom Harper Maclean has two priorities—raising her son Nathan and starting a new life. Her mysterious new neighbor may be impossibly charming, but Diego asks too many questions about her past—and about the father of her child. Questions she fears will reveal her burning attraction for Diego, and ultimately put them all in danger’s path.

“You’re the best, mister.” The kid had to get his smile from his mother, Diego decided. Because not once could Diego remember Ramsey’s smile making him want to offer one in return.

“Diego,” he said after a second, figuring talking was better than standing here on the sidewalk, grinning like an idiot. “You can call me Diego.”

“Cool. I’m Nathan. I’m seven. I’m gonna be a stunt­man when I grow up. Or a veterinarian. I’d rather be a Jedi warrior, but Mom says we’ll see about that one. She says that about a lot of stuff. We’ll see. What are you?”

Huh? Was that a question? The kid’s expression said it was, so Diego did a mental replay.

“I’m in security,” he said, using the cover Savino had decided on.

“Bet you’re good at it.” Grabbing the bike by the han­dles, the kid gave it a good shake, then grinned when the chain stayed in place. “You’re good at fixing things, too. Maybe you could teach me to fix some things?”

Diego didn’t have much experience with kids—hell, he didn’t have any experience. Despite that, he had to figure this one was something special.

Before he could answer him, a delivery truck rum­bled its way to a stop in front of the kid’s house. Some­thing he’d noticed was a regular occurrence. At least once, sometimes twice a day.

“You sure get a lot of deliveries,” he observed, watching a guy in shorts carry a stack of boxes toward the door.

“Yeah. Mom gets tons of stuff. She decorates for peo­ple’s houses. She orders pillows and bowls and things like that. Sometimes she gets material and things to help her decide colors.”

Convenient. Or it would be if Ramsey were run­ning drugs or stolen goods—that’d be a solid cover. But unless he’d shipped himself home in an ash can, it probably wasn’t pertinent. Lansky would claim oth­erwise, though, so Diego made a note to mention it in his next report.

He caught a flash of something out of the corner of his eye. All it took was a casual glance toward the house to send him rocking back on his heels.

Not even signing for a slew of packages and fend­ing off the flirtations of the delivery guy were enough to keep Harper Maclean from sending her son a pro­tective frown.

So far his glimpses of her had been at a longer dis­tance than the twenty feet currently separating them. Her photos didn’t do her justice. He’d known she was a looker, but no way he’d have thought fully dressed in person could trump that bikini shot, even if that bikini shot had been kind of blurry.

He’d have been wrong.

The New York Times and USA TODAY bestselling author of more than 40 books, Tawny Weber writes sassy, emotional romances with a dash of humor, featuring hot alpha heroes. The recipient of numerous awards, she has also hit number one on the Amazon and Barnes & Noble bestseller lists. Readers can visit Tawny’s website http://www.tawnyweber.com for free reads, first chapters, insider story info and much more. . You can also find her on Facebook, Twitter and Goodreads. Tawny lives in Northern California with her family.