What if the Big Bad Wolf was the good guy?
#shifter #paranormal #romance #99cents 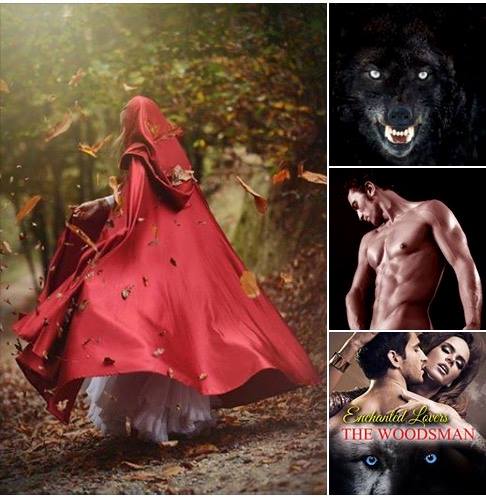 Praise for The Woodsman
“THE WOODSMAN, by Belle Scarlett Little Red Riding Hood adult style, gives a whole new meaning to the wolf eating her

By day, she’s a mild-mannered story consultant, film producer, and award-winning screenwriter in Lost Angeles. By night, she assumes her super-secret identity as Belle Scarlett, author of futuristic and paranormal romances with a high sizzle factor. Aiding her in her quest for kick-ass, magical romance and out-of-this-world, passionate-ever-afters are her trusty sidekicks, Tall-Alpha-Blue-Eyed Boyfriend, upon whom her heroes are based, and Evil Feral Cat, upon whom her villains are based.
Belle is a proud member of The Naughty Literati, a cadre of saucy romance writers who publish hot romance short story anthologies five time per year.

With only a small clue to the whereabouts of the arsonist that torched his family’s business, Lawrence “Lucky” Coalson heads to Las Vegas. While posing as a bouncer, Lucky finds himself ensnared by the lovely bartender, Claudia. But, like Lucky, she’s not what she appears to be and what happens in Vegas follows Lucky back home with unimaginable consequences.
Brandon Coalson is as hot as his older brothers, but he’s the sensitive one that patches broken hearts and sends them on their way. Until Anna Meeks walks into the office and into his life. Her shy demeanor melts Brandon’s heart, but she’s got secrets that could get them killed. When a family friend is grievious injured, the men vow to put an end to the sabotage once and for all, but nothing goes according to plan, and the men must fight Mother Nature, a murderer, and the local law enforcement to get the answers they seek.

His face came closer and she closed her eyes, but popped them open when he simply touched her nose with his, rubbing it lightly. “Open those beautiful eyes, Anna. I want to see your passion.” Anna stopped breathing as Brandon tilted her head slightly, and
touched just the tip of his tongue to her lips, licking just the corner, then drawing back. She caught fire at the first touch of his lips on her skin.
Naturally shy, she had nevertheless had her share of kisses, but this was entirely different from anything she had experienced before. Tender pecks on the eyelids, the chin, a teasing bite along the throat and collarbone, Anna’s breath hitched. Then he gave a little lick to the ‘oh so sensitive’ spot at the curve of her neck. She gasped, as he captured the sound with his mouth, then went in for the kill…open mouth, tongue licking her lips, demanding entrance as he succeeded in devouring her mouth just as he had been dreaming of doing for so long. One sweet, succulent, tongue entwined, dream of a kiss. When they were both breathless, he tenderly pulled at her lower lip with his lips and planted one last gentle kiss on the curve of her neck. Although it was a gentle
kiss, the underlying hunger could not be denied, and Anna didn’t want to deny him anymore. She craved his touch like flowers crave the rain. But now was neither the time nor the place to indulge in these fantasies. She drew back reluctantly. “You make me forget myself,” she blushed and lowered her eyes.
“You make me hot,” Brandon whispered seductively.

Other Books in the Series:
Book 1 – Whistlin’ Dixie

Hi! I’m Maggie Adams. I live near St. Louis, MO with my high school sweetheart, Ned, (married thirty years) and my wonderful kids, Katie (Kyle) and Ross (Valerie). My life is like a walking, talking sitcom from I Love Lucy, but I love it, although people do tend to keep their distance from me! Writing has always been my dream, with reading my favorite hobby. I try to include a little bit of my life in everything I write, so when you read my books, keep your eyes wide open – I’m in there somewhere!

And you can find me here as well:
FACEBOOK

Benedict Harrison was a master of detachment…

Gabriella Ballantyne’s marriage is in trouble…

Her husband Max has grown cold, and Gabriella seeks out the Braille Club and its decadent delights in an effort to reawaken their hearts and strengthen their marriage. But when she presents him with his own membership card, she sees only revulsion in his eyes. Gabriella must use everything she’s learned from the club in a last-ditch effort to reconnect with Max and resurrect their love.

Abbey Marshall needs an escape from her cheating husband…

Abbey begins sensory lessons at the Braille Club, hoping it will help her regain control of Steve and prevent his straying. When the unthinkable happens, she is consumed with the need to learn the identity of Steve’s latest mistress. Left reeling and with her sanity in jeopardy, a chance visit from her husband’s former teammate might be her last chance to find the answers she needs.

At the Braille Club, the elite membership walks in the dark in order to find the light…they need to be blind before they can see. They’re ready—are you?

Abbey was sitting on the bed completely naked when Steve burst into the room. Startled, he stopped in his tracks. She uncurled her hand with the blindfold ribbon.
“You’ve got one chance, and I want you to do exactly as I say.” Steve went to talk, but Abbey put a finger to his lips.
“Do you see this bell? You can’t let it ring; you need to keep still, Steve, that’s very important.”
She pulled the basic blindfold ribbon over his eyes.
“I’m going to put these over your hands.”
“Hey,” he gasped.
“That’s the second thing, Steve, you mustn’t speak. I want you to think about my naked body.”
Steve groaned.
“I’m lying here below you, exposed and laid bare to you. However, you can only have my mouth, nothing else… What will you do with my mouth, Steve?”
“Do you want to kiss me? Crush your lips against mine? Take my mouth and push your way inside?
Steve panted.
How does it feel?” Abbey’s mouth was close to his ear now “You’re so good with your tongue; I can feel it pushing my lips apart, thrusting its way inside.” Abbey sighed, caught up in the story.

Welcome back to the Braille Club, home of blindfolded sensory delights designed to unleash your passions. New wonders await to heighten every sensation, for those adventurous enough to try…
Benedict Harrison and Siena Waters struggle to rebuild their lives…
Siena and Benedict—owner of the secret, exclusive Braille Club—face the trial of the man who brutally attacked her. Already fragile, crucial DNA results send Siena reeling, leaving her future with Benedict uncertain. Will their shared devotion to the Braille Club be enough to keep them together?
Guy Walker has spent two years trying to forget Anna Dunbar and their volatile affair…
Managing the Braille Club in Benedict’s absence, Guy is shocked when Anna applies for membership. Their dark desires are reawakened, but Anna resists, determined to remain faithful to her husband. When a desperate call from Anna sends Guy rushing to her door, he’s completely unprepared for what he finds.
Ford Munroe will help bring the Braille Club to a whole new level…
Tasked with developing new technologies to enhance the club’s erotic pleasures, Ford enlists engineer Esme MacDonald to assist him. As they test the devices, the attraction between them intensifies, delighting Ford but leaving Esme perplexed about her sexuality. Her revelation rocks Ford—is Esme really interested in him, or only the Braille Club?
Model Niven Fraser joins the Braille Club to exorcise her demons…
Left emotionally scarred by her step-brother Toby, Niven hopes to find healing through the club and her emerging friendship with Siena. But her past is about to catch up with her, bringing new dangers and old vendettas, putting her life and those around her in grave danger.
A blindfold can enrich an experience, but deadly threats are best faced with your eyes wide open. You decide—is it worth the risk to indulge in the Braille Club?

She had her back to him while speaking into the handset as he looked her over. Her pencil skirt seemed to hug every curve. It accentuated the narrowness of her waist and roundness of her buttocks; the fabric moulded to her flesh, the slit sexy and enticing. He remembered the feel of those buttocks pushing into him and closed his eyes. Her high heels showcased her shapely calves. The cream blouse she wore was so fine the outline of her underwear was visible. Guy licked his lips, he liked what he saw.

JA (Julie Ann) Kerr was born in the spring of 1967 at Paisley’s Ross Hospital in Scotland and grew up in, Glasgow. She was an office administrator and latterly a recruitment consultant before marrying and relocating to The Netherlands with her husband. After two years, she relocated to Cheshire where her first child was born and returned to work part-time. Her final move took her back to her home town of Glasgow where she welcomed the arrival of her second child. She raised her family whilst harbouring dreams of becoming a writer. In September 2013, she started her first book and has just finished the second book in the series, The Braille Club Unbound.