A princess who has lost her faith in love . . .

Lucy Linden’s prince charming (a.k.a. her fiancé) disappeared three months before the Big Day. Determined to pick up the pieces, she dives into the world of online dating. But the only men interested in a woman whose day job involves playing Cinderella leave Lucy looking for an exit strategy before the main course. And the man rushing to her rescue isn’t the solution to her problems. Jared is a walking, talking fantasy—if Lucy’s daydreams began and ended in the bedroom. No one would ever mistake South Florida’s bored billionaire bachelor for a long-term prince.

A man willing to risk everything to prove he’s her prince . . .

Jared Mitchell pushes the limits, in the boardroom and in bed. When his best friend and business partner’s little sister sends up red distress flares, he’s thrust into the role of pseudo-big brother. He’s never had a thing for Cinderella. But now he’s fighting his desire to make the princess his—even if he has to risk his empire to deliver her happy-ever-after ending.

She pulled her hand free from his and crossed her arms in front of her chest. She wore the white lace shirt like body armor. “And if I tell Finn you spent your lunch hour interrupting my date?”

“Your date was over.” He stepped closer and inhaled her sweet vanilla scent. “What you tell your brother, that’s up to you.”

“So you didn’t drive over here on some misguided rescue mission?”

He raised his hand to her cheek and brushed his fingers over her skin. “I came here to kiss you.” 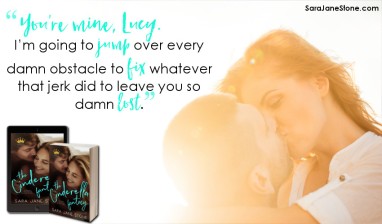 This is the second book by Sara Jane Stone that I’ve read, and like the first ~ To Tempt A SEAL ~ I really enjoyed this story too.

I liked Lucy and Jared, the MCs, but I initially had a little trouble getting fully into their ‘relationship’ – that changed the more I read. I loved that Lucy was determined to hold out for The Cinderella Fantasy

Following a string of spectacular dating disasters, Lucy knows better than to go and have a thing for her brothers friend while at the same time Jared notices actually notices her as more than the ‘little sister’ and starts to want more… even though his view of relationships and HEAs differs greatly from hers!

There was fun and laughs, awful dates, friendship, romance and attraction that all added up to a good read and I’m looking forward to the other books in the series – and wondering if I’ve pegged 2 future MCs correctly!!

3.9* for a good read that I’ll most probably read again in the future!

Sara Jane Stone lives near New York’s Hudson River with her very supportive real-life hero, two lively young children, a lazy Burmese cat, and a very active dog. When she is not finger painting with the kids, she loves writing sexy stories, staying up past her bedtime reading red-hot romance, and chatting with her readers on Facebook.

RELEASE BLITZ ~ To Seduce A Seal by Sara Jane Stone

U.S. Navy SEAL Dante Raske is all about guarding his heart and serving his country, but now that he’s busted his knee on a mission, he needs something to keep his mind busy. Playing bodyguard for a sexy little country starlet until he’s cleared for duty? Just what the doctor ordered.

Chrissie Tate refuses to be a one-hit wonder. If she’s going to take care of her family, she can’t let herself get distracted—especially not by the hot as hell Navy SEAL hired to be her bodyguard. But when a crazed fan attacks, she changes her tune. She’ll keep Dante around…if he agrees to teach her self-defense.

Except their close-contact lessons quickly become steamy bedroom sessions. And it’s up to this Navy SEAL to save Chrissie’s career—and his heart—before their explosive passion consumes them both…

She turned her attention to the man who’d rushed in to save the day. Oh, he had muscles all right. But she suspected he didn’t spend all of his time in the gym.

“Stay down,” Mr. Tall, Dark, and Handsome growled. Jared whimpered and looked as if he might cry. The man who’d rushed in and rescued her turned to her.

His expression softened as his deep brown eyes scanned her from head to toe. A lock of his wavy, dark hair fell over his forehead.

Her hero looked as if he’d stolen Patrick Dempsey’s hair and Channing Tatum’s muscles. And to her impromptu rescue she was wearing a witch’s wig that had been on clearance at the Halloween store.

But without the ugly wig, someone might recognize her, and she’d be stuck signing autographs instead of rehearsing.

“Fine,” she gasped, still fighting to regain her equilibrium. His brow furrowed as he reached into one of the many pockets lining his shorts. He withdrew a cell phone. “Would you like me to call the police?”

His concern deepened as if the word “fine” meant something altogether different to him.

She offered him her best smile, the one that won over audiences night after night.

“I saw what happened,” he said. “I can give a statement. It won’t be your boyfriend’s word against yours.”

“He’s not my boyfriend,” Chrissie said, cutting Jared off before he could reveal her identity to the stranger. “We’re backup singers. Both of us. We’re shooting a music video out here later today. And we wanted to get in some practice.” She forced a fake laugh. “Clearly, we need it.”

The man with the movie star muscles took a step back. “Music video?”

“Uh-huh. The song is about lust, love, and well…” She bit her lower lip and glanced at her feet. “Sex. It’s a country song.”

He crossed his arms in front of his chest, drawing attention to his biceps.

One touch. Just one.

But she fought the temptation. She needed the handsome stranger to continue with his hike through the canyons before he recognized her.

Or decided to call the cops despite her protests.

After several years on the other side of the publishing industry, Sara Jane Stone bid goodbye to her sales career to pursue her dream – writing romance novels. Armed with a firm belief that dreams do come true, Sara Jane sat down at her keyboard to write fun, sexy stories like the ones she loved to read.