Genre: Mature New Adult/Adult Contemporary Romance
Novella
Blurb:
The Bachelor Auction
“Out of all the stupid things I could have said and done, insulting the rich and influential guy who could make or break
our business has probably topped the charts. Calling someone a creep isn’t so bad, is it?”
All is fair in love and business…
My friend’s plan is pretty simple: win the bachelor auction in a charity event and get the most influential man to sign a business deal with us. It’s a do or die situation. But plans rarely go as you would expect.When the bids begin to take ginormous proportions, my friend can’t stop in her rush of excitement. We don’t have the money. We can’t afford him, and yet, before I can even comprehend what’s happening, we’re the highest bid.“The bachelor” aka Tyler Becks isn’t old and ugly. He isn’t very business-like, either. In fact, it’s hard to imagine that someone with his brain and bank account can be this sexy.He understands our cash-strapped situation and is kind enough to cancel the bid. Let us out of the contract. No hard feelings. Or so he claims.He’s even kind enough to want to work with us. With me, in particular. I can’t refuse, even though working for him means I have to see him every day. My future depends on it.I won’t let my guard down. I won’t fall for him, and particularly not now that I know he’s hiding something from me. Everything comes at a price. Even Tyler’s generosity.
AVAILABLE NOW

All buy links can be found here:

THE BACHELOR AUCTION by J.C. REED is now live!

To find out about Jessica’s work, future releases, competitions and great giveaways visit her website at http://www.jcreedauthor.com
or
Facebook page
http://www.facebook.com/AuthorJCReed

Celia Villarreal had wanted those things with Ryland Brody, Bitterthorn’s golden boy—and wanted them badly enough to make a fool of herself one idiotic night months ago.

Naughty children shouldn’t touch what they don’t own.

Rejection always stings, but putting a move on Ry had devastating consequences.  Now, her regret burns as bright as her need — until Ry, as glorious as ever, makes her an offer that might finally be her ticket out of town.

I’m not your enemy, darlin’. If you give me half a chance, you’ll see that I can be your hero.

When working together leads to grinding all naked-like with the very cowboy who’d seen her at her worst, Celia is afraid she’s made a mistake.

Until the truth comes out.

Once Ry’s past motivations come to light, Celia must decide if she can give him another chance, or turn her back on Bitterthorn — and the one man who’s always wanted her — for good.

** Warning **
Due to adult language/swearing and several explicit sexual scenes, this book is not intended for readers under the age of eighteen.
If you’re not a fan of a full-tilt Alpha male who will use fair means or foul to win the one and only woman of his dreams, then this book is not for you.

Guaranteed HEA. No cheating, no love triangles, no former love interests. As always, a nice long epilogue to ensure a feeling of closure/completion for the reader.

“You wanted twenty-four hours to make your decision, so that’s exactly what you’re going to get. You will be taking this project on, whether you know it or not, so there’s no point in you saying otherwise.”

“No, I won’t.” She didn’t even realize she was going to stomp her foot in her fury until she did it, and something crunched underneath it.

Her muffled scream coincided with her launching straight up and into Ry’s surprised arms, her own arms wrapping around his neck in a stranglehold.

“A scorpion? Did you get stung?” In an instant he had her inside, carrying her at a near-run to set her on the huge kitchen island topped with a slab of dark gray granite. “Celia, are you stung?”

“It crunched.” God, God, why didn’t he understand the horror?

“Which foot? The right?” Untangling himself from her strangler’s grip, he picked up her foot by the ankle, bent to examine it… and began to smile. “Looks like a small, garden variety beetle.”

When he burst out laughing, she vowed that one day she would kill him. Slowly.

“Okay, I’m getting it off, though this is your own damn fault.” Still chuckling, he turned and ripped a wad of paper towels off the roll suspended under the weathered-finish cabinets. “This is South Texas, woman. You know better than to run all over creation without shoes.”

“Yeah, I heard you. Along with the rest of the county.” Grinning, he wet the paper towels and with quick efficiency swept the bottom of her foot clean. “There we go, all better. Wanna see it?”

“I’m going to take a wild shot in the dark and guess you don’t like bugs.”

Valiantly she fought off a shudder of revulsion and tried to remember how to communicate without screaming. “The first time I saw a tomato hornworm I almost blacked out. Nearly ended my love of gardening then and there.”

“You still look like you might faint.” Tossing the towels into the nearby trash, he leaned his hands against the counter on either side of her and dipped his head until his face was level with hers. “Want me to carry you to bed, darlin’?”

Her eyes met his, and for a full second her heart stopped beating. The question hung between them, full of such wild possibilities it made her breathless, and a startling flash fire of hungry awareness scorched her skin until she thought she might be glowing with it. Then the memory of being spanked for being a naughty child reared its ugly head, and that heat morphed into prickling humiliation.

Deliberately she shifted her gaze to the spiky tribal tattoo on his right forearm—mainly because no one with a double-X chromosome could breathe when looking into those devastating green eyes—and tried to edge away from him. “No, I’m fine. Except I’m not fine,” she couldn’t help but add, at last giving in to the shudder. “I think I need some antiseptic. And a foot bath. And maybe surgery, because I can still feel it wriggling and crunching. Ugh.”

Another burst of laughter erupted from him, and to her shock he rested his forehead on her shoulder. “God, you’re killing me with the cute.”

He was so close, so warm, so freaking touchable… “Laugh all you want, but I’m not joking. I think I’m traumatized.”

“What you need is a distraction. I got just the thing.” Still chuckling under his breath, he lifted his head and caught her mouth with his. 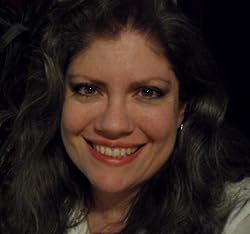 A competitive figure skater from the age of eight, Stacy Gail began writing stories in between events to pass the time.

Now with a day job of playing on the ice with her students, and writing everything from steampunk to cyberpunk, contemporary to paranormal at night, both dreams have come true.