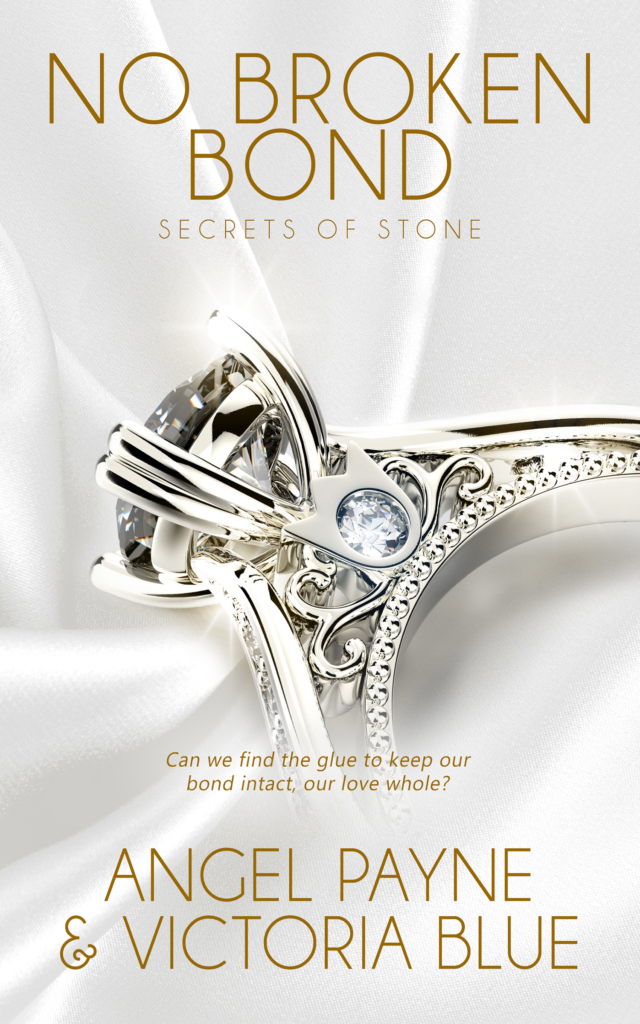 Can we keep our bond intact? Do we have the courage to find out?

It’s just the beginning of what Fletcher Ford and Drake Newland have done to my world—and my soul—since igniting my desires, answering my dreams and filling every inch of my heart. I am rocked. Changed. Freed. A woman in love…

Not that the adjustment has been easy, and not just for my orthodox family. Falling for one dazzling, commanding billionaire is complicated enough. Wading through dysfunctions, judgments and emotional baggage from all sides, we’re searching for the perfect balance of our love, and nearly find it, when disaster slams again—threatening to permanently cripple us this time.

With our bond in shreds and our spirits in tatters, can we find the glue to keep our bond intact, our love whole? Are we broken…or just bent? Do we have the courage to find out? 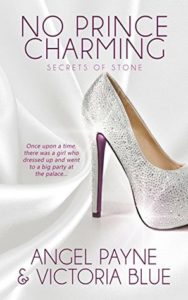 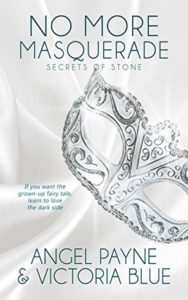 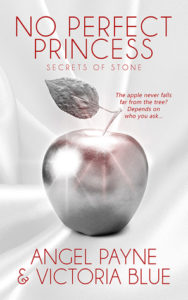 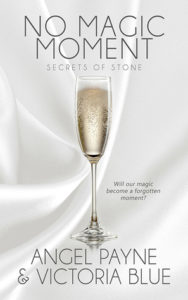 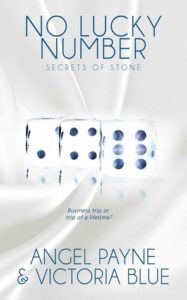 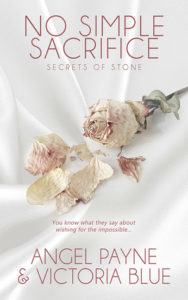 USA Today bestselling romance author Angel Payne has written for four publishing houses, and is also independently published. She loves to focus on high heat romance starring memorable alpha men and the women who love them. She has numerous book series to her credit, including the Suited for Sin series, the Cimarron Saga, the Temptation Court series, the Secrets of Stone series (with Victoria Blue), the Lords of Sin historicals, and the popular WILD Boys of Special Forces series, as well as several stand-alone titles. She’s excited to be one of the inaugural authors for Waterhouse Press’s MISADVENTURES series, launching in Fall 2017. Currently, she is serving as the Vice President of Romance Writers of America’s Passionate Ink Chapter. She lives in Southern California with her soul mate husband and beautiful daughter.

Victoria Blue lives in her own portion of the galaxy known as Southern California. There she finds the love and life sustaining power of one amazing sun, two unique and awe inspiring planets and three indifferent, yet comforting moons. Life is fantastic and challenging and everyday brings new adventures to be discovered. She looks forward to seeing what’s next!

NEW RELEASE ~ Counting on You by J.C. Reed & Jackie Steele

I have everything I want.
Success. Wealth. Women…and make that plenty of those. As a filthy-rich CEO, I would say I’m pretty much close to perfection. Except for that one weakness: I’m cocky as hell, and an irresistible magnet for women.


So when one tiny mistake lands me in hot waters with the investors, I have one hell of a choice to make:


Restore my reputation…
Or risk losing my company.


I’m a man of my word and failure is not an option. Not now. Not ever. I fully intend to uphold my responsibilities.


Sharing an apartment should be easy, right? And it’s only for six weeks.
That’s what I thought before I found out that my new roommate is female.
And wow.
Vicky Sullivan is unlike any woman I’ve ever met.
She’s hot as sin, and crazy.
Definitely not my kind of crazy, but too hot to pass up.
There’s something about her that makes me rage with want.
I don’t like her, but obviously my dick does. And what he wants, he gets.


Six weeks…
Living together shouldn’t be too hard…
Until my best friend challenges me to a bet…
I make it my mission to make her mine.


There’s only one problem.
I have to break…Every. Single. Rule.
And did I mention she’s completely off-limits?

Author’s note – Counting On You is a full-length, standalone novel with no cliffhanger.
AMAZON US / AMAZON UK /  B&N / KOBO / GOOGLEPLAY  / iBOOKS

COUNTING ON YOU IS NOW AVAILABLE WORLDWIDE!

J.C. Reed is a New York Times, USA Today and Wall Street Journal Bestselling author. She writes steamy contemporary romance with a touch of mystery and suspense. When she’s not typing away on her keyboard, forgetting the world around her, you can find her chatting with her readers on Facebook.

Jackie Steele is a USA Today Bestselling author and a true romantic at heart. Whether reading or writing, Jackie loves dark, emotional stories that twist with your head and take you on a journey. As an ever romantic, she believes in happy endings and true love in all forms, which is reflected in all of her books.
FACEBOOK / WEBSITE / TWITTER

Genre: Contemporary Romance Novella
Release Date: June 7, 2017
Blurb
After too many bad decisions in romance, Emma is going on a man-fast. For the next six months, she’s fasting from men. No sex. No dating. No soulful gazes. No fond memories of her first crush. She’s going to spend the time focusing on her career, getting in touch with herself, and helping her two best friends with the launch of their new tea room. No men.
And that includes her brother’s best friend, Noah Hart, who has just returned to their hometown.
She doesn’t want Noah anyway. He might be even hotter than he was before, but he’s not a nice guy anymore. He’s made a fortune by acting ruthless in business, and the last thing he’s looking for is small-town domestic life. He doesn’t even want to be in town again, but a sick grandmother guilted him into it. Then he has nerve to not even recognize Emma when he sees her again. Maybe it’s been seven years, but a decent guy would remember his best friend’s little sister.
Noah is not a decent guy. Anyway, Emma is on a man-fast. And she doesn’t want Noah.
At all.
Fifteen years ago, three girls were thrown together because their brothers were best friends. Now they’re all grown up,
and their brothers are grown up too. The Tea for Two series tells their stories.
ADD TO GOODREADS

Purchase Links
Only 99c
AMAZON: US / UK / CA / AU
B&N / KOBO / iBOOKS
Trailer
Excerpt
“No matter what you think, I’m not a little girl anymore.”
She had no idea why she was saying this. She was just rambling, too nervous to think through the words that were coming out of her mouth. And she was seriously having to hold herself back from reaching out toward him, taking hold of his shirt and pulling him closer.
He smelled so incredibly good. Not anything as strong as aftershave, but something warm and expensive.
She wanted to smell him even more.
She wanted to feel him.
She wanted to taste him.
She wanted to…
He reached out and tilted up her face so she was looking at him. “I know you’re not a little girl, Emma.”
Emma.
He’d called her Emma.
“You do?” she whispered, the world shuddering in front of her eyes.
“Damn it, Emma,” he rasped thickly, raising his other arm so he was holding her face in both hands. “Surely you know I’m seeing you as anything but a little girl.”
She was trembling now, and there was absolutely no way she could hold herself back. He was holding her face like she was precious, and the look in his eyes…
So filled with heat and hunger. She’d never seen anything like it.
She grabbed onto his shirt like she’d always wanted to and drew him even nearer, and then he was finally, finally kissing her.
Naturally, she was kissing him back.
His mouth was hard, hungry, seeking, and he slid one of his hands down her back until it was cupped around her bottom, pressing her more snugly against him.
Part of her mind registered that he was already hard, and the knowledge whirled dizzily in her mind—the knowledge that she could have this kind of effect on his body.
Noah Hart’s body.
He stepped her backward until she was trapped between him and the railing of the front steps. They were on a public street. In front of her building. Anyone could see them. But the knowledge just made the whole thing even hotter, even more exciting.
She clutched at him eagerly, arching against him as his tongue delved deeper into her mouth, claiming her completely. The fingers of one hand were fisted in her hair now, and it felt possessive, thrillingly dominant.
She’d imagined herself in this position many times, but her dreams had never been like this. They’d been adolescent, foolishly romantic. Not hungry and carnal like this.
Raw.
Primitive.
As if only each other could slake their desperate thirst.

Falling for her Brother’s Best Friend was a quick, fun read. The first book in a new series and I’m keen to find out how things go for the other girls and guys.

Noelle Adams gave us believable characters and fairly realistic concerns for both lead characters not wanting to get into a relationship and overall I really enjoyed the story. My only issue was with Noah and his yo-yo’ing thoughts and emotions, gods, the guy sent out so many mixed signals that if I’d been Emma I’d have thrown him to the curb and written him off…. but, luckily for her brother’s best friend, her patience and capacity to forgive were way better than mine!

Looking forward to the next book in the Tea for Two series. I’m rating this read 3.75*

Noelle handwrote her first romance novel in a spiral-bound notebook when she was twelve, and she hasn’t stopped writing since. She has lived in eight different states and currently resides in Virginia, where she reads any book she can get her hands on and offers tribute to a very spoiled cocker spaniel.
She loves travel, art, history, and ice cream. After spending far too many years of her life in graduate school, she has decided to reorient her priorities and focus on writing contemporary romances.
Author Links
WEBSITE