Publisher: Sourcebooks
Genre: Contemporary Romance
Release Date: September 6, 2016
Blurb
Foley Sanders loves his mom, his best friend, and cars. His job at Webster’s garage is a little slice of greased heaven, and he’s been content for years. But watching his friends find happily ever after has him dwelling on the statuesque firecracker with a hate-on for men.Cynthia Nichols is tired of feeling defensive about her size, so she’s decided to quit dating. But that doesn’t mean she hasn’t noticed the annoyingly sexy giant whose cars are crowding her lot. Apologetic, persistent Foley charms her into a date… that goes horribly wrong. Cyn might act as if she doesn’t like him, but her heated glances tell a different story. Before she knows it, Cyn is falling for Foley. Hard. But guys like Foley don’t date bigger girls, and he’s got a shady past—filled with skinny blondes. When things move too far too fast, she ends things before he can crush her heart into tiny pieces.

Foley knows Cyn is the woman for him. But if she won’t believe in herself, how can she believe in him loving her? Then tragedy strikes, and he’s not sure of anything anymore.
ADD TO GOODREADS
Purchase Links
AMAZON: US / UK

Roadside Assistance is the second book in the Body Shop Bad Boys series, which is a spin off from the McCauley Brothers series that is a favourite of mine by Marie Harte.

Foley Sanders was quite a surprise…. We knew from the previous book that the guys at the garage all have a bit of a past, they are all big, tattooed and badass….. but Foley had a really sweet, caring and protective side to him which we saw often, particularly when he was dealing with his mum.
When he encounters Cyn, who is so unlike the females he usually dates, he is instantly intrigued and more than a little interested in the feisty female even though she seems to have a serious dislike of him.

Cynthia Nichols had pretty much had it with guys.. They can’t accept her as she is and no matter how things start out with them they end up trying to change her. Between this and the hurtful comments from her mother about her size and how she’ll never get or keep a man if she doesn’t pay more attention to how she looks Cyn has all but given up on men – until she runs into Foley.

This story was about acceptance and love. Not only being cared for as you are by someone else but about loving and accepting yourself and being open to the fact that someone can be and is interested in you for ALL of you, and that they honestly do like what they see, even when you can’t.

I loved how determined Foley was when it came to pursuing Cyn and how he made her feel. He was all in, regardless of how much she may have doubted his feelings. Don’t get me wrong, he was an idiot at points and had the typical ‘foot in mouth’ issue (especially on their 1st date) but he was a straight talking guy and had the best intentions when it came to the women in his life that he cared for. There’s so much more to Mr Sanders than how he looks, the guy is smart, funny, loyal, hard working, sexy and a hot as hell dirty talker (always a plus in my book… 😉 )

Cyn was sarcastic and funny and gave as good as she got – the banter between her and Foley was great fun to read. As the story unfolded we found out just how aware of her looks she was and why she felt as she did. Once or twice I wanted to give her a bit of a shake and make her stop looking back and comparing Foley to previous boyfriends, she needed to believe in him more than she did – but given her history, I did get why she had doubts and an occasional lack of self confidence. When she eventually got her head on straight I was cheering her on for finally getting with the program – and not just when it came to her relationship.

We once again met up with the other guys at Webster’s garage – always a lot of fun – and we found out a little more about Sam Hamilton (Foley’s best friend, and the main man in the next book in the series) that gave us a little insight into his character and why he did some of the things he did in the book (I could have happily smacked him at one stage) and we caught up with Del and Mike (from What to do with a Bad Boy, McCauley Brothers #4) and how things were going with them.
We were also introduced to the Donnigan’s (now, there’s another great series – let me tell you that’s gonna be as good a read as the Body Shop Bad Boys, but I digress)
I loved Nina, Cynthia’s sister in law, but gods, when it came to her mother….. aahhhh, that woman! As you’d expect from Marie’s books, the supporting characters were likeable and interesting and I now want to know some of their stories more than ever.

Roadside Assistance was a really great read and another hit in the Body Shop Bad Boys series. I’m really loving these books and can’t wait for more in the series!!

Johnny Devlin’s a charmer with a checkered past. He has had his eye on scorching-hot bartender Lara Valley for ages, but she’s rejected him more than once. That doesn’t mean he won’t come to her aid when some dirtbag mauls her. When she asks him on a date as a no-strings-attached thank you, he can’t say no.

And then he’s saying nothing but hell, yes. 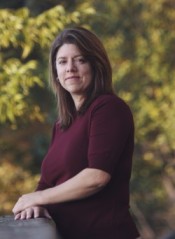 She’s a confessed bibliophile and devotee of action movies. Whether hiking in Central Oregon, biking around town, or hanging at the local tea shop, she’s constantly plotting to give everyone a happily ever after.