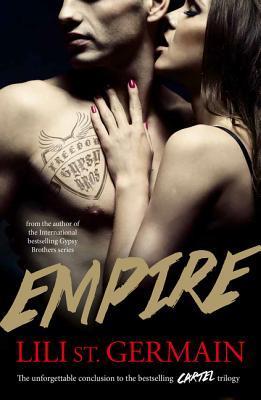 The heart-pounding finale to the USA Today bestselling Cartel trilogy.

People aren’t born monsters. They’re made that way. They’re created, fuelled by one singular moment in time when their universe shatters.

I’d been with Dornan Ross for the better part of a decade. Slept in his bed, sewn up his wounds, tasted his blood, seen inside his soul. But even I wasn’t prepared for what he did. I should have known it would always come down to this, from the very moment I laid eyes on him in that motel. I should have known his salvation was too good to be true. Because it’s all gone now, the dark secret love I had for him bleeding away in the violent reality that came afterwards.

Now, there’s only hate. Now, I just want to escape. Even if it means I have to kill him to be free.

TO SEE THE FIRST 2 BOOKS IN THE SERIES CLICK HERE:

“Your father would never allow this,” I said, staring at the dress Dornan had laid out on the bed. I didn’t have my burner phone with me. I couldn’t call John. Fuck! I needed to call John. Right. Now. Dornan smirked, standing before me and tugging the hem of my dress. I resisted, holding on to that hem with everything I had. Dornan raised his eyebrows and took hold of my wrists, squeezing them just enough to show his strength. “Allow what?” I rolled my eyes, trying to shake his grip off, but he was having none of it. He tightened his fingers around my wrists, and they throbbed in protest. “A trip to Vegas. A white dress. Look at what you’re wearing!” He shrugged. “Maybe we’re going to have a nice dinner.” “It’s the middle of the morning,” I shot back. My wrists were on fire. There’d be marks on them tonight. “Maybe we’re going to have a nice brunch,” Dornan said, his jaw tensed, his demeanor no longer amused. Now, he just looked fed up. “I’m not marrying you,” I said, the words out of my mouth before I could think twice. He slapped me across the face so hard I tasted blood. My wrists were free, though, and purely on instinct I punched him in the face, as hard as I could. Right in the nose. The nose that John had broken the night before. Teamwork. Blood exploded from his face and he stepped back, cupping his hands over his nose. All I could see was his eyes; black, cold, determined. The pain of my blow hadn’t angered him, or so it seemed. No, it seemed that the violence had only strengthened his resolve. He took his hands away and blood dripped onto his shirt; a chilling grin spreading across his face. His nose was bent slightly, and red. Oh, Jesus. I was going to pay for that. He came at me like a fucking CIA operative; blunt, fast, effective. He grabbed my hair and yanked, spinning me until I was in his arms. Before I could break free, he had his arms locked around my neck, squeezing against my carotid artery, and within a matter of seconds, the room went black.

Lili writes dark, disturbing romance. Her #1 bestselling Gypsy Brothers series was created in a serial format – quick, intense episodes released frequently with some wicked cliffhangers. The Gypsy Brothers series focuses on a morally bankrupt biker gang and the girl who seeks her vengeance upon them. The Cartel series is a prequel trilogy of full-length novels that explores the beginnings of the club, to be released in 2015 by HarperCollins.

Lili quit corporate life to focus on writing and so far is loving every minute of it. Her other loves in life include her gorgeous husband and beautiful daughter, good coffee, Tarantino movies and spending hours on Pinterest.