Are you ready to meet the neighbors?

Add to your TBR

Things a good neighbor can do for you:

Katya Tocci has never paid much attention to who lives next door – her career always kept her too busy. She’s a good girl, working her way to becoming the most sought after cake designer in all of San Francisco.

But even a good girl’s gotta cut loose once in a while, right? So one fake dating profile later, and she’s ready to tarnish her squeaky clean image. Little does she know, her fun time is closer to home than she ever imagined.

Throw in a neighbor who wants to corrupt her, and another who just wants to own her, and her entire world is flipped upside down.

Who knew neighbors could be so helpful? 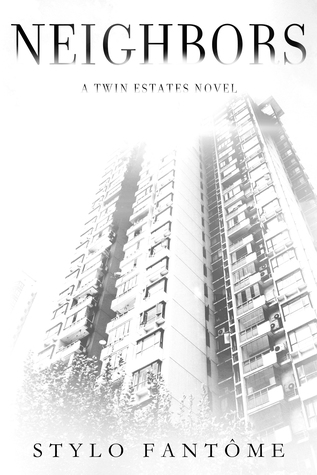 Crazy woman from a remote location in Alaska (where the need for a creative mind is a necessity!), I have been writing since … forever? Yeah, that sounds about right. I have been told that I remind people of Lucille Ball – I also see shades of Jennifer Saunders, and Denis Leary. So basically, I laugh a lot, I’m clumsy a lot, and I say the F-word A LOT.

I like dogs more than I like most people, and I don’t trust anyone who doesn’t drink. No, I do not live in an igloo, and no, the sun does not set for six months out of the year, there’s your Alaska lesson for the day. I have mermaid hair – both a curse and a blessing – and most of the time I talk so fast, even I can’t understand me.

Yeah. I think that about sums me up.

Against her better judgement makeup artist to the stars, Jasmine Andrade, agrees to learn and perform a sexy tango live on television for a charity telethon. She’s hoping the dance classes from her youth will be enough to keep her from falling flat on her face in front of the nation.
The only trouble is the obnoxious celebrity she’s partnered with AND the fact that she’s falling for her charismatic choreographer, Eduardo, who’s made it crystal clear that he doesn’t mix business with pleasure.
There’s a first time for everything, right?

USA Today Bestselling author, Elisabeth Grace, has a hot spot for alpha males and a soft spot for happily ever afters. She lives outside of Toronto, Canada with her husband, two small children, and killer cat. Her theory is that Satan himself spawned the white furball. She’s almost always eaten a chocolate bar before 10am (don’t judge) and has a mild, but healthy obsession with model David Gandy. 😉

If you’re a lover of romance novels, hot sex in obscure places, alpha males, and a little LOL on the side than you may enjoy her work!

She LOVES talking with fellow readers about books! If you’re the same she encourages you to reach out to her via one of her social media links!

You can sign-up for her newsletter and get information on her books, signings, and more at Elisabeth-Grace.com

He was also to-die-for gorgeous,

and my stepbrother’s fraternity brother.

Get Your Copy TODAY:

Add Anti-Stepbrother to your TBR

He told me to ‘settle, girl.’ He asked if ‘something was wrong with me?’ He said I was an ‘easy target.’
That was within minutes when I first met Caden Banks. I labeled him an *sshole, but he was more than that. Arrogant. Smug. Alpha. He was also to-die-for gorgeous, and my stepbrother’s fraternity brother.
Okay, yes I was a little naive, a tad bit socially awkward, and the smallest amount of stalker-ish, but if Caden Banks thought he could tell me what to do, he had another thing coming. I came to college with daydreams about being with my stepbrother, but what would happen if I fell for the anti-stepbrother instead?

He wasn’t looking at me any more. I wasn’t even sure he was really in the room.

I needed to leave this alone. He had given me the clues—looking away, his jaw clenching, pain like I’d never heard from him sounding loud and clear. My instincts were telling me to shut up, but I couldn’t. I had this burning need to know more about Caden. I needed to get in there, past his walls, and I wanted to understand him.

I wanted to help him.

Caden was hurting, and I wanted to take that away.

Caden turned his gaze to me now, and I felt branded by the pain I saw. His eyes were stricken. “Does it matter?”

“No.” My breath caught and held in my chest. I wanted to go to him, but I also wanted to slink away. I was stirring up his pain, but I had to know. “What happened, Caden?”

“Because it’s hurting you.”

I made a decision, though I had no idea what the ramifications were going to be. I stood, my legs going numb and my stomach clenching, and I moved to his side. He leaned back, his head falling to the couch, and he watched me.

The need to ease some of his hurt outweighed the fear of what would happen next. Swallowing tightly, I stepped over to straddle him and sat down.

He asked that softly, still holding his beer. I took it from his hands and put it on the stand next to the couch. Then I just sat there. He had to do the rest. I’d already made the first move.

I glanced down at his hands, feeling like an idiot. “What happened?”

“Why are you pushing this?”

I looked back up to find confusion warring with need in his eyes. He wasn’t pushing me away, so I sank further into his lap.

“You haven’t told anyone else about this.” It wasn’t really a question, but I saw the confirmation in his eyes. My chest tightened, thinking about whatever secret he held. “Please tell me.”

“No.” He shifted forward, and I braced myself, expecting him to push me away. He didn’t. His hands grasped the backs of my legs and lifted me so I was more fully on his lap.

I could feel him between my legs, and my breasts almost pressed against his chest. I waited. I wanted to see what else he’d say

“But not because I don’t want you to know,” he added. “Because it’s not my secret to tell.”

I nodded, my stomach doing somersaults now. “That makes sense. I can respect that.”

And there we were. His hands cupped my ass, and the pain in his gaze became something darker, something I felt too, something that began to turn off all rational thought.

“What are we doing here?” he questioned, his voice like a caress in itself.

I leaned forward, my gaze lingering on his lips. “I didn’t really think it through.”

“Still not thinking it through.”

“You’re okay with that?”

In that moment, the truth exploded in me. I wanted him. I wanted this—but it was more. I needed this.

I closed the distance between us.

I didn’t begin writing until after undergraduate college. There’d been storylines and characters in my head all my life, but it came to a boiling point one day and I HAD to get them out of me. So the computer was booted up and I FINALLY felt it click. Writing is what I needed to do. After that, I had to teach myself how to write. I can’t blame my teachers for not teaching me all those years in school. It was my fault. I was one of the students that was wishing I was anywhere but at school! So after that day, it took me lots of work until I was able to put together something that resembled a novel. I’m hoping I got it right since someone must be reading this profile! And I hope you keep enjoying my future stories.

Amazon US
Amazon CA
Amazon UK
Amazon AU
About The Book
As an extreme-sports mogul, billionaire Micah Sinclair is comfortable taking risks. But nothing—and no one—has ever challenged him like Tessa Sullivan. He’s fascinated by the woman who’s overcome so much, including the loss of her hearing. The petite blonde
dynamo, a small-town restaurateur on the Maine coast, is the most courageous person he knows, and he wants her in his bed. Now all he has to do is convince Tessa to explore their desire.
After a lifetime of loss, Tessa’s finally come to terms with her limitations. Or she would, if a certain sexy businessman weren’t pushing her to want more.
And to want him. All her remaining senses are clamoring for her to touch, taste, and feel. But her doubts tell her to go slow when their
passion gets too hot.
Micah’s determined to prove to Tessa that she can still have everything she’s ever wanted, including his love. But will she listen to her head—or her heart?
Teasers

AND great news! you can now #PreOrder

Also Available in the series

J.S. Scott is a New York Times and USA Today bestselling author of steamy romance. She’s an avid reader of all types of books and literature.
Writing what she loves to read, J.S. Scott writes both contemporary steamy romance stories and paranormal romance erotics. They almost always feature an Alpha Male and have a happily ever after because she just can’t seem to write them any other way!