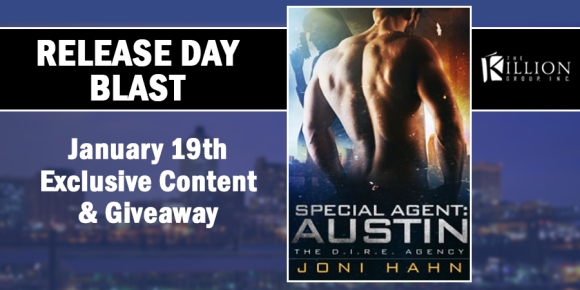 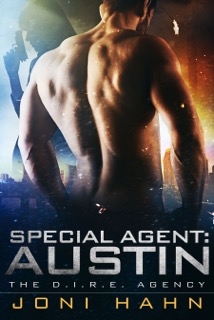 A D.I.R.E. agency candidate falls for an assassin ordered to bring down the agency… An alpha male meets his match in this spicy, suspenseful tale of assassinations, staying alive, falling in love, and all the trouble those things bring. Special Agent: Austin is a D.I.R.E. Agency Novella – short, not-so-sweet, and filled to the brim with action – in the bedroom and on the run. If you like your romance with a little bit of daring, you’ll love this new book by Joni Hahn.

Join Joni Hahn and the Killion Group, Inc as we celebrate the release of Special Agent: Austin, a D.I.R.E. Agency Novella with a Release Day Blast.
The one-day celebration will take place January 19th and will include exclusive content and a giveaway. ONE GRAND PRIZE WINNER will receive a Kindle Fire!

Visit these websites throughout the day for more exclusive content:

Twelve years ago, Austin Rose silently stood by while his mother sent his brother away from home and their stepfather’s abuse. Now that he’s learned the truth behind his family’s lies, Austin is a changed man, determined to make things right with the D.I.R.E. super agent – and himself – by making the elite security agency.

A hit gone bad changed assassin, Belle Mason’s life forever. Assigned to San Diego for a D.I.R.E. agent’s wedding, she’s determined to bring down D.I.R.E. while its vulnerable, and give her sisters a new life. What she doesn’t count on is interference from the distracting, forbidden Austin Rose, or his knack for dispelling her lifelong truths.

When Austin’s chances of making the agency hinge on going undercover with Belle – literally – he’ll do whatever it takes to make the team.

But, when Belle decides to put her own life on the line, only one truth remains, and Austin won’t silently stand by…

Leaning on the bar, Austin Rose looked back over his shoulder, his grip tightening on the beer glass in his hand. The bully leaned down into the blonde beauty’s face, his hand slamming against the table with a resounding whack. She seemed unfazed by his aggression — her shoulders relaxed, her head at a patronizing tilt.

Her shaking leg gave her away.

She’d followed Austin into the San Diego airport lounge after he’d checked on Hope’s flight, learning he had an hour before his future sister-in-law arrived. The open bar was deserted except for the three of them and the bartender, who looked just as unfazed as the blonde wanted to appear. The early afternoon hour proved slow for the establishment, though with his plans, Austin found the early hour suited his spastic nerves well.

“I asked you a question.” The man spat his words, his arms braced on the square tabletop.

Straightening, Austin turned around on his barstool and tipped up the brim of his straw cowboy hat. Airline passengers walked to and from their gates beyond, the overhead announcements muffled from the buzz of hurried conversation. His brother, Jaydan, would’ve already been at her side. The D.I.R.E. super agent was a man’s man, someone that stood up for the underdog and faced any resistance with courage.
Austin wished he could say the same.

The woman stood to her full, leather-covered height, her heels and black pants making her legs appear a kilometer long. The man blocked her path, causing her to bend back over the table, her green-tipped curls falling to her waist.

“Get out of my face.” She pushed against the man’s chest, her black fingernails digging into his shirt. 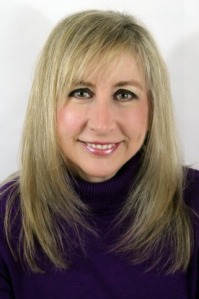 By day, Joni Hahn keeps her secret decoder ring hidden while she works as a mild-mannered contemporary romance author. She believes the world can never have too many superheroes, and anxiously waits for the call when one will need help saving the world… or getting into his costume. Joni was born with a hopelessly tender heart and believes there is nothing on earth more exhilarating than falling in love. A native Texan, she thinks cowboys are the epitome of masculinity, and that country music is the other soul music.
Joni is a member of The Authors Guild, the Romance Writers of America and its Published Authors Network. She is a member of several RWA sub-chapters and has served in numerous board positions with the San Antonio Romance Authors. When she isn’t writing, she enjoys reading, going to movies and concerts, and spending time with family and friends.