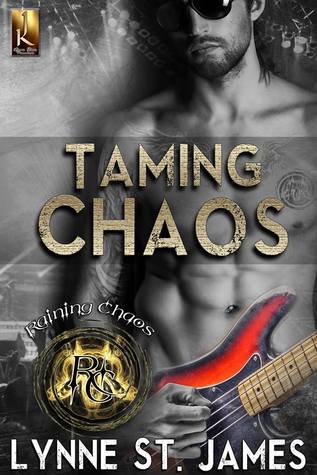 In book one of Raining Chaos:

From foster care to the Garden, Raining Chaos makes their debut. They learn fame and fortune comes with a price; it’s all in how you deal with it that makes the journey worthwhile.
Chaos is told by the record company that what got them to the top is no longer cutting it so they’re sending a songwriter. Yeah, that goes over well…not…until she shows up. Their chemistry is off the charts, however, for a commitment phobia guy, does Chaos really want to take the chance with his and the band’s future.

Cynda makes a promise and fulfilling it could cost her more than she ever expected. Rock stars can’t be trusted, she knows, she lived with it all her life. When she shows up to meet the band, it all changes when she’s drawn to everything she vowed would never be in her future. But as Cynda feels the pull toward Chaos and joins them on the road, she realizes the cost of loving a rock star is huge. A simple job and promise will change her life, now she needs to figure out whether it would be for better or worse.

Jump on the bus as Raining Chaos sets out on their tour and join them to see if making music soothes the soul or breaks the heart.

Lynne St. James lives in the mostly sunny state of Florida with her husband, two dogs and two cats. She works in the Internet Technology industry and loves to escape to the worlds of her creation. When she’s not working, she’s writing, reading, taking pictures and sometimes cooking.

If Lynne had her way she’d travel all over the world and set a new book in each place she visited. Maybe someday!

Addicted to coffee if she’s not at her desk you can usually find her hovering over her Keurig coffee maker waiting for the next cup to be ready.

She has books out with JK Publishing and Siren. The first book in a Rocker New Adult series is releasing in August–look for Taming Chaos coming Aug. 12, 2014.

REVIEW ~ LOVE IS A BATTLEFIELD by VIVIAN AREND & ELLE KENNEDY

Book 2 in the DreamMakers series from NYTimes Bestselling author Vivian Arend and Elle Kennedy, author of the bestselling Out Of Uniform and Killer Instincts series.

He’s ready to admit she’s all grown up…

After two tours of duty, former Army Ranger Jack Hunter is back in the US, working to keep DreamMakers a brilliant success. Now that his best friend’s little sister is home from college, it’s time to retire his hands-off policy and take action. He wants Pepper Wilson in his bed, but seducing the feisty redhead could be dangerous for more than one reason.

She’s ready to push all his buttons…

Pepper is tired of being bossed around by everyone in her life, especially arrogant, annoying, overbearing Jack Hunter. While she can’t deny the man is out-of-this-world gorgeous, his alpha routine is getting old. His steely determination proves a match for her own, though, and the attraction simmering between them ignites into fiery passion.

But can their wild sexual exploration turn into more without someone getting burned?

I read my first Elle Kennedy (One Night of Sin) a couple of weeks ago, adored it! Also as a parawhore I’ve read some of the Granite Lake Wolves books so I’m familiar with Vivian Arend. I therefore thought I would love this one as both are great authors but it fell just a little short.
It’s an enjoyable read, no question of that. I knew going in I would have a hot alpha male and a sassy girl to tame him, I also knew it would be steamy and sexy and it delivered completely on all of this.
Jack and Pepper are engaging leads as they banter and flirt their way through the book. Funny, a touch of kink, scorching hot and fabulous sexploits!
Suz is a secondary character with an amazing personality – I want to be her when I grow up and loved all her interactions.

It’s an easy fluffy marshmallow read to fill a couple of hours with but where it failed for me was the expectation that the reader could believe 3 Rangers can come out of their military career and life to run a party planning company, also, that these successful alpha soldier men would not be security conscious with their women or their business was too unbelievable for me. I may be unfair in this thought but when I read fiction, and I have a hot alpha military man in my head & my fantasies, I want to believe he would do everything in his power to protect his woman and his family.

So to conclude, would I recommend it? Yes. Pepper is fabulous and Jack is yummy, the story is enjoyable (if a touch stretching the believability factor) and for a quick hot read it’s more than worth a look.

Vivian Arend in one word: Adventurous. In a sentence: Willing to try just about anything once. That wide-eyed attitude has taken her around North America, through parts of Europe, and into Central and South America, often with no running water.

Her optimistic outlook also meant that when challenged to write a book, she gave it a shot, and discovered creating worlds to play in was nearly as addictive as traveling the real one. Now a New York Times and USA bestselling author of over 30 novels and short stories in both contemporary and paranormal genres, Vivian continues to explore, write and otherwise keep herself well-entertained.

She loves to hear from readers – vivarend@gmail.com
You can also drop by http://vivianarend.com for more information on what is coming next

A RITA-award nominated author, Elle Kennedy grew up in the suburbs of Toronto, Ontario, and holds a B.A. in English from York University. From an early age, she knew she wanted to be a writer, and actively began pursuing that dream when she was a teenager.