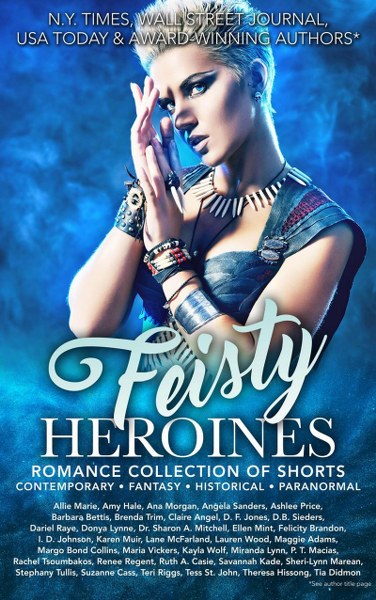 Over 30+ pulse-racing shorts to capture your heart with USA Today, The Wall Street Journal, New York Times, and Award-winning authors in the mix.
Paranormal, Contemporary, Fantasy, and Historical Romance that will whet your
appetite with titillating, heart-pounding tales you’ll want to read again then beg for more.
Fall in love with your next book crush!
**Only .99 cents!!**
Goodreads * Amazon

All proceeds from sales of the book will be donated to International Red Cross and the Association for Critical Care Nurses! 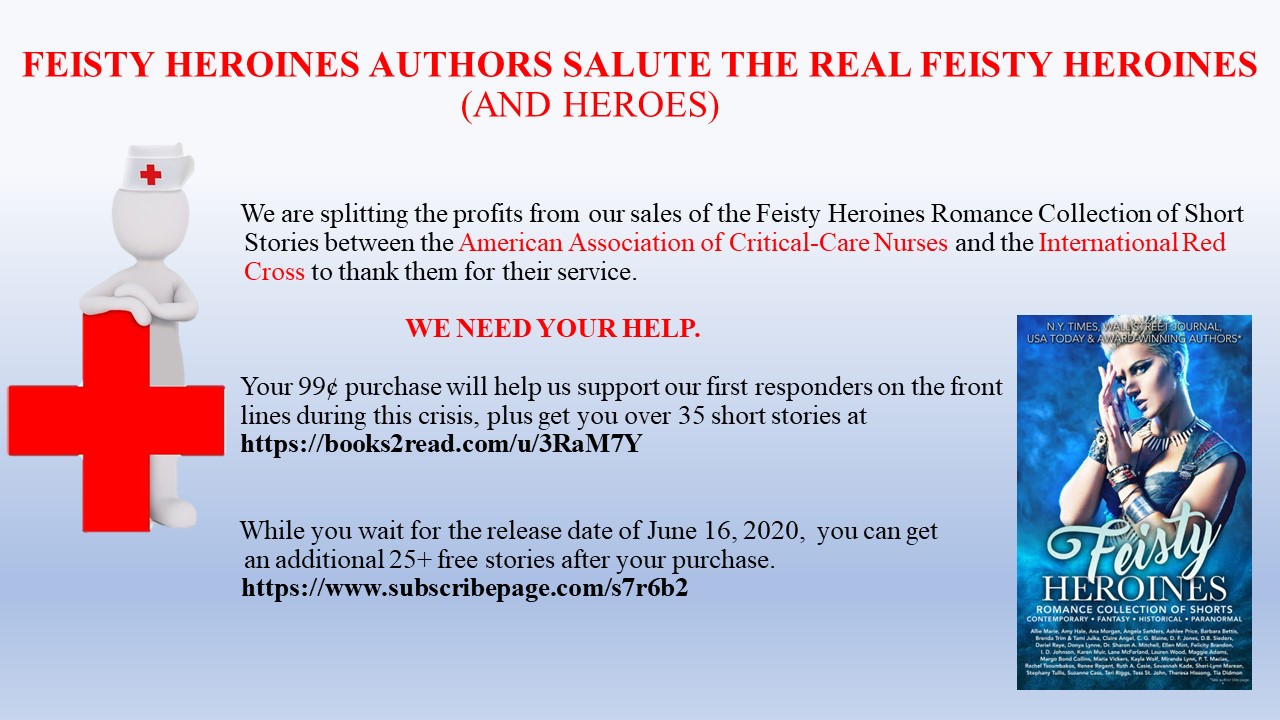 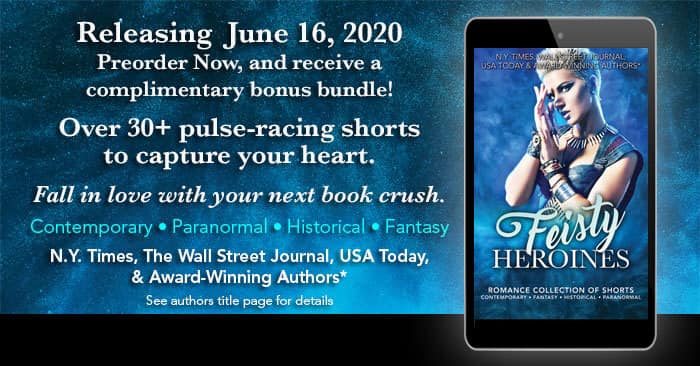 Tihar travels to Earth to find and claim a Jones female. He knows they are fearless, psychic warriors, and talented in bed sport. Ten minutes after meeting Sarah, Tihar knows the feisty little human is the one he has been searching for. Now he must convince Sarah that she’s meant to be his. He thinks Earth girls are easy. he’s about to learn that messing with a Jones female is never a good idea.
The first time Sarah sees Tihar, she’s a wee bit freaked out. The Askole warrior has tentacles, snakelike features, and black, armored-plated skin. Even weirder, she finds him strangely attractive. Tihar’s torso is sculpted perfection and his black scales are actually kind of sexy. Who knew challenging Tihar to combat would start the Askole mating dance?
As the two grow closer, their romance comes to a screeching halt when Askole rebels attack Tihar’s home world. He tells Sarah she is his heart’s destiny and that he will love her to the end of time, then he abruptly severs their mental bond and disappears. Sarah’s left
reeling from shock, but she’s a Jones and isn’t about to let a galactic war stop her from hunting down her mate. Can the two of them find their way back into each other’s arms?
Publisher’s Note: The first half of Game On Askole is a prequel to Vexing Voss, and the second part moves forward three years.
Goodreads * Amazon

Wulf knows Yakira is his soulmate. Now he just needs to convince her. But with intergalactic terrorists on Yakira’s trail, there’s little
time for romance. What’s a hot-blooded Coletti warlord to do?
Yakira feels safe and cherished with Wulf, but he is a Coletti–the ultimate predator with a taste for blood, a passion for battle, and the need to control everything in his life. The big question is: how does she make Wulf understand she’s a powerful psychic with kick-ass bionic limbs and quite capable of taking care of herself?
Goodreads * Amazon

Kaylee knew being a Coletti Warlord’s mate wasn’t going to be easy. Not only was Talree downright scary, he had a bossy streak a mile long and collected enemies like most men collected lovers. But while Kaylee’s life might not be perfect, Talree truly loved her.
Flash forward nine months to a very pregnant, insanely hormonal and cranky as hell Kaylee. If the pregnancy wasn’t enough to drive her crazy, Talree’s enemies are tap dancing on her last nerve. The Shani Queen Mother, a psychotic alien with a bone to grind against Talree, decided she wanted the planet Tartum–a barren piece of crap loaded with Ditrum crystals, and part of the Coletti Empire. Her master plan? Kidnap Kaylee and hold her for ransom. If the Overlord refused to give Tartum to the Queen Mother, she would feed Kaylee and her son to the Tai-Kok.
She thinks Kaylee will beg for mercy. Boy, is the alien bitch in for a surprise. She’s about to meet a woman suffering from hormone overload and a serious lack of chocolate. The only one begging for mercy will be the Queen Mother.
Goodreads * Amazon

Bree never thought her dimwit act, military grade mace, cattle prod, or dumping a ton of stinky manure on Jaylan’s head would encourage his pursuit. Who knew a Coletti warlord would think being zapped with a cattle prod as foreplay? Or that a clever opponent only heightened his enjoyment of the chase?
The chase comes to an abrupt halt when the Tai-Kok attack Tucson, forcing Bree to team up with the Coletti warlord to stop them. Suddenly plucked from Earth by a crazed Tai-Kok commander, Jaylan and Bree find themselves stranded on a hostile alien world, and being tracked by a deadly Askole assassin. Neither of them expected to find love.
Goodreads * Amazon

For Voss, a Coletti Warlord, conquering the universe is a piece of cake. After all, he’s a master of psychic seduction; no one can resist him when he sets his mind to it.
Zoey Jones is determined to find her mother’s killer. Surrendering to a fierce Coletti warrior is the last thing on her mind. When Voss is determined to make Zoey his mate, she unleashes her own brand of whoop-ass to discourage his pursuit. When her clever disguises, skunk perfume, stun gun, and smoke bombs fail to stop the ruthless warlord, she’s forced to negotiate her surrender: she would mate with him if he would help her find her mother’s killer.
To Zoey’s surprise, Voss agrees, and the hunt is on. Their quest to bring the villain to justice leads to unlikely alliances in an interplanetary war, and more surprisingly, to love.
Goodreads * Amazon
***Note – the first two books are not available for purchase at this time! The publisher went out of business and the author is fighting to get her rights back to sell the books!

Just My Luck
Coletti Warlords #1
Kaylee Jones is a trouble magnet. Chaos and disaster are her faithful companions. She belongs to the thin blue line protecting Earth from the Tai-Kok, alien predators who consider our world an all-you-can-eat banquet.
Her crappy luck puts her on the alien freaks- most wanted list and lands her in one of their prison cells. Her roommate? A very hungry vampire. Okay, Talree’s really a Coletti Warlord who decides to make her his mate. Kaylee’s definitely not willing but isn’t strong enough to fight him off and now he owns her mind, body and soul.
She’ll admit the sex is hot and the bossy jerk has agreed to save Earth from annihilation. The bad news is, Warlords aren’t benevolent do-gooder types and there is a price for his help: the women of Earth.
And the really bad news is, Talrees’ low-down conniving brother, Malik, has joined forces with the alien freaks and now Kaylee and Talree have to stop them from destroying both their worlds.
Goodreads

The Warlord’s Comeuppance
Coletti Warlords #2
Stealing from a warlord and giving him the one finger salute as I made my getaway was not the brightest thing I’d ever done. Okay, it was an incredibly stupid stunt.
Did I mention that this particular Coletti warlord is the most feared in the entire galaxy? That Zarek’s the ultimate predator and even the other warlords are scared spitless of him? That he never ever stops until he either captures or kills his prey?
Yeah, I have the big, bad after me and all because of one little finger. Okay and a Ditrim crystal the size of my fist. Am I worried? Of
course, only an idiot doesn’t fear a very angry Coletti warlord. But, I am very good at what I do. Bad news is, so is Zarek.
Goodreads

I was a 9-1-1 dispatcher and to keep insanity at bay, I took up writing. Not to worry. The insanity isn’t catching – much. Other than the addiction to chocolate and the twitch in my left eye, I’m good.
I made the Night Owl’s Awesome Paranormal Romance Authors List.
Website * Facebook * Twitter * Amazon * Goodreads