Series: Where the Trail Ends, #2

From acclaimed author Anna Schmidt comes a sweeping historical Western romance about the unbreakable bonds of family, second chances, and a whole lot of heart in the Wild West.

But it wasn’t, no matter how much she wished it were true. They were different now. She would always love him…

But can she trust him not to break her heart?

Jess Porterfield fled to the big city after his father’s sudden death, leaving behind his family ranch-and his childhood sweetheart. Now Jess has returned as the local lawman, determined to prove his worth…and win back the one woman he could never live without.

Young frontier doctor Addie Wilcox was devastated when Jess left her behind. Now he’s back and it’s difficult to remember why she should keep her distance. But with the town’s richest man set to see her hang for a crime she didn’t commit, Addie must put her faith in the lawman who broke her heart-and trust that together they’ll find their second chance at love.

Award-winning author Anna Schmidt delights in creating stories where her characters must wrestle with the challenges of their times. Critics have consistently praised Schmidt for her ability to seamlessly integrate actual events with her fictional characters to produce strong tales of hope and love in the face of seemingly insurmountable obstacles. She resides in Wisconsin. 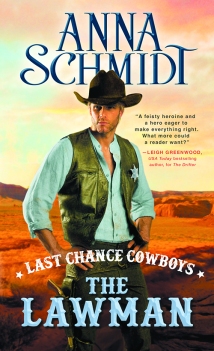 Sometimes characters I think are minor speak up. (Sometimes they pretty much grab me by the shoulders and shout, “I want to tell my story!”) That was the case with Dr. Addie Wilcox. So when her childhood sweetheart and love-of-her-life Jess Porterfield returns at the end of The Drifter, I knew what the second book in the series would be. In The Lawman, Addie has to fight her lifelong attraction to Jess, determined that he won’t break her heart again. Trouble is, once he gets appointed to serve as the town marshal and is pretty much living down the street from Addie and her family, avoiding his good looks, charming smile and determination to win her heart becomes pretty much impossible.

The story of Addie and Jess is all about first love and second chances. Here’s an excerpt that I hope sends you running to the store or your computer to read more…

Addie could not for the life of her figure out why she continued to allow that man to get to her. Why couldn’t she be more like Jess’s younger sister and her good friend, Amanda—calm and sophisticated?  She searched the gathering for Amanda, but hesitated when she saw her friend surrounded by the usual trio of admirers.  Amanda had been planning this party for weeks now. She certainly deserved to enjoy herself and not have to sympathize with Addie. Besides, Jess was Amanda’s brother, newly returned to the fold from his travels following his father’s death—a death everyone now knew had not been the accident they’d first thought.

Addie stopped dead in her tracks. Her hand flew to her mouth. What was she thinking?

Poor Jess. Did he know? Had anyone told him? Of course not. Jess had a temper, and if he knew what everyone now knew—that his father’s death was not the accident they’d first thought–he’d likely be off trying to track down the killer.

Maybe Jess had overheard some of the talk. Maybe that was why he was talking about applying for the marshal’s position. After all, Jasper Tipton had built that big house in town to please his bride, Pearl, and his brother, Buck, lived there as well. While the local marshal had no jurisdiction outside the town limits, Jess might just think the fact the Tiptons resided in town opened the door for him to go after them. More than likely he would get himself killed in the bargain. Her head was spinning as she tried to think the issue through from every side.

“This is not one of your medical cases,” she muttered to herself. “This is Jess.” And when it came to figuring out what Jess Porterfield might be thinking, she fully appreciated that logic was not part of the process.  She was still mad at him for leaving all those months ago but that didn’t mean she didn’t care about him and, knowing his temper, he was bound to get into trouble.  With a sigh, she headed off to find her father. Maybe he could talk some sense into the man—the man she had fallen in love with, planned a future, with and then rejected.  But as she moved through the throng of party guests pausing now and then to exchange a greeting, it wasn’t her father she saw—it was Jess.

He wasn’t spoiling for a fight at all. No, he was laughing and flirting with Sybil Sinclair. Sybil with her blonde curls and her bright blue eyes and a cupid’s bow of a mouth that made her look like a porcelain doll. Sybil with her tiny waist and her flawless skin and giddy laugh that actually came out as Tee-hee-hee.

“My brother is trying to make you jealous,” Amanda murmured, coming to stand next to her. “Do not let him know that it’s working.”

“It’s not,” Addie insisted, pushing her glasses more firmly onto the bridge of her nose. She straightened to her full height, which was still a good three inches shorter than Sybil’s willowy five foot four.  She brushed back a lock of hair that had come loose from the practical bun she preferred and tried not to think about how her stick-straight locks would look worn down like Sybil’s long curls. “I really couldn’t care less if your brother wants to make an utter fool of himself with that…”

When authors aren’t hard at work crafting books readers can fall in love with, like readers, they enjoy unwinding with a good book, movie or television program. Maybe the writing is inspiring, or maybe it’s just nice to escape the real world for a little bit. We asked Anna about her favorite stories, ones from popular books, movies, and television shows that many of us probably know too. Read on to see what she had to say!

Anna: I’m watching this now and total in love with Poldark—for the moment.

Interestingly enough, Anna takes inspiration, not just from other books, but from film and television most of all. She says:

That’s the way I write. My characters are actors on a stage or in a movie, and they walk around doing whatever they please while I try to get it all down!

Win one of five copies of Last Chance Cowboys: The Drifter,
the first book in Anna Schmidt’s ‘Where The Trail Ends’ series

Anna Schmidt is the award-winning author of over twenty works of historical and contemporary fiction. A reviewer from Romantic Times notes that “Schmidt is not timid about presenting her characters with their faults laid bare for the reader to see.”
Anna’s series set in WWII Germany with an American Quaker protagonist has been praised by Publisher’s Weekly! Her trilogy of contemporary novels about Mennonites living in the community of Pinecraft just outside Anna’s winter home of Sarasota, Florida is now available in single title and as a three-book volume. She is currently working on a four-book Western romance series.
Anna is a three-time finalist for the coveted RITA award from Romance Writers of America and has finals and won the Reader’s Choice award from Romantic Times magazine. Critics have called Anna “a wonderful storyteller”!