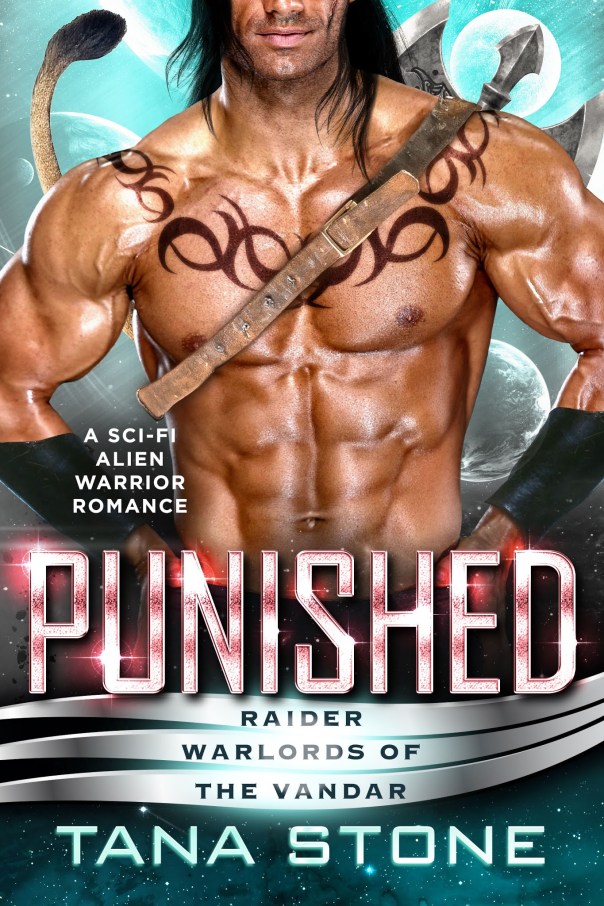 Title: Punished
A Sci-Fi Alien Warrior Romance
Series: Raider Warlords of Vandar #5
Author: Tana Stone
Genre: Sci-Fi Romance
Release Date: April 15, 2021
BLURB
The dark and deadly Vandar raider who was exiled to our planet refuses to help me. Not without a price.
Corvak is nothing like the men on my planet. He’s violent and brooding and wants nothing to do with a human female like me. But he’s the only one who knows how to fight. And I refuse to be helpless when the empire comes after our planet–and it’s only a matter of time until they do.
I’ve heard the rumors about the Vandar. They travel in invisible hordes of terrifying warbirds and their menacing raiders terrorize the empire and any ship that gets in their way. I don’t care. I’m willing to do whatever it takes to become a warrior, even if that means convincing Corvak that I’m worthy of his attention. Even if it means sneaking into his quarters and begging.
But am I willing to take the deal he finally offers me? He wants off the planet that I so desperately want to save. If he teaches me how to be a warrior, I have to help him escape. As much as the dominant Vandar gets under my skin, will I be able to let him go?
Punished is a full-length sci-fi romance novel with a HEA and no cheating. It features steamy scenes on an alien planet, alien space battles, and some serious enemies-to-lovers, forbidden love, secret relationship heat.
ADD TO GOODREADS 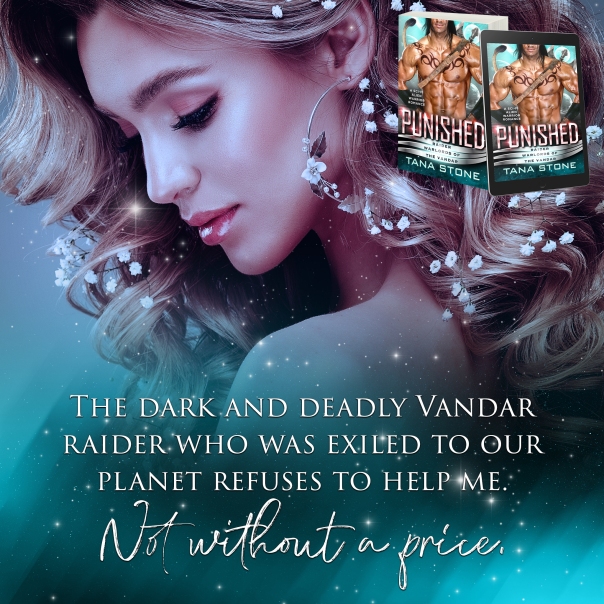 EXCERPT
Corvak
I peered down at the female standing in front of me with her arms folded over her chest and her eyes flashing. It took all my restraint not to curl my tail around her again and feel the warmth of her body. “What kind of proposal? I have no intention of taking you as a mate.”
She scowled at me. “Don’t flatter yourself, tough guy.”
I almost laughed. I was used to people cowering from me, but this female did not seem scared of me at all. Was I losing my touch? I growled, curling my lip in an attempt to intimidate her. “Do I need to remind you that you have no leverage with me, female?”
She lifted her chin. “Sure I do, you just don’t know it yet.”
I raked a hand through my hair. This female was nothing but an irritation I didn’t need and a distraction I could not afford. Although I now understood the attraction one could feel towards human females, they were still nothing but trouble for a Vandar. “What is your proposal? Tell me, before I grow weary and throw you out the door.”
Her gaze flickered to the arched door then back to me. “Fine. My proposal is that you teach me how to fight.” She held up a hand before I could interrupt. “Privately.”
I stared at her. “You mean secretly.”
“Well, yeah. Obviously, no one could know.”
Now that we were no longer in the dim hallway and stood in my small living area, my gaze was drawn to her hair. It was still pulled up into a tight knot on her head, but it was the most fascinating shade of golden brown, with strands of red and gold glinting in the flickering light.
“Well?” Her sharp question made me pull my gaze away from her hair and my urge to unknot it and watch it fall loose.
I mimicked her crossed arms with my own. I had no intention of granting her proposal, but I was curious to hear her reasoning. “How exactly do you envision I could train you secretly? My quarters aren’t large enough, and I doubt yours are either.”
She shook her head. “We’d have to do it outside the village and at night.”
“At night?” Now I was intrigued. “You wish us to sneak away from the village at night? Don’t you think someone will notice us creeping around?”
She gave me a pointed look. “We wouldn’t leave the village together obviously. We’d have to time it right, but most villagers are in their dwellings after the evening meal. I don’t know if you’ve noticed or not, but this planet is pretty dull, especially after the suns go down. Most families play games in their dwellings and occasionally there’s a performance in the amphitheater, but people aren’t usually out after dark.”
I returned her look. “And your sister and father? Won’t they notice you missing at night? You don’t play games?”
Her expression darkened. “We aren’t one of those types of families. My father won’t notice, and my sister will cover for me.”
“You’ve thought this through.” I leaned forward so that she had to tip her head back to continue to meet my gaze. “But you haven’t told me yet what’s in it for me.”
She opened and closed her mouth. “What do you mean?”
“You’ve told me why this is important for you and how you think the logistics can work, even though I’m not sure if you’ve thought through every contingency, but you’ve yet to explain why I’d give up my evenings and risk my good standing in the community to sneak around with you.”
Color suffused her cheeks. “You wouldn’t be sneaking around with me. You’d be teaching me and helping the planet defend itself.”
I shrugged one shoulder, enjoying watching her outrage grow. “I’m already doing that during my training during the day. It’s a pretty big ask to want me to conduct another entire training session for one person.”
Her hazel eyes narrowed. “I didn’t know it would be too taxing for a big, tough Vandar like you but if you don’t have the stamina…”
I huffed out a laugh, and let my gaze drift down her body. “You are worried about my stamina, female?”
She swallowed and the pink in her cheeks became blotchy patches of red. “No. I don’t care anything about your stamina. I thought you might want to teach me out of the goodness of your heart.”
“I’m an exiled Vandar battle chief,” I growled. “There is no goodness in my heart.”
“I don’t believe that.” Her voice trembled as she spoke.
“Believe what you wish, female.” I wrapped my tail around the back of her legs. “But do so at your own risk.”
ALSO AVAILABLE 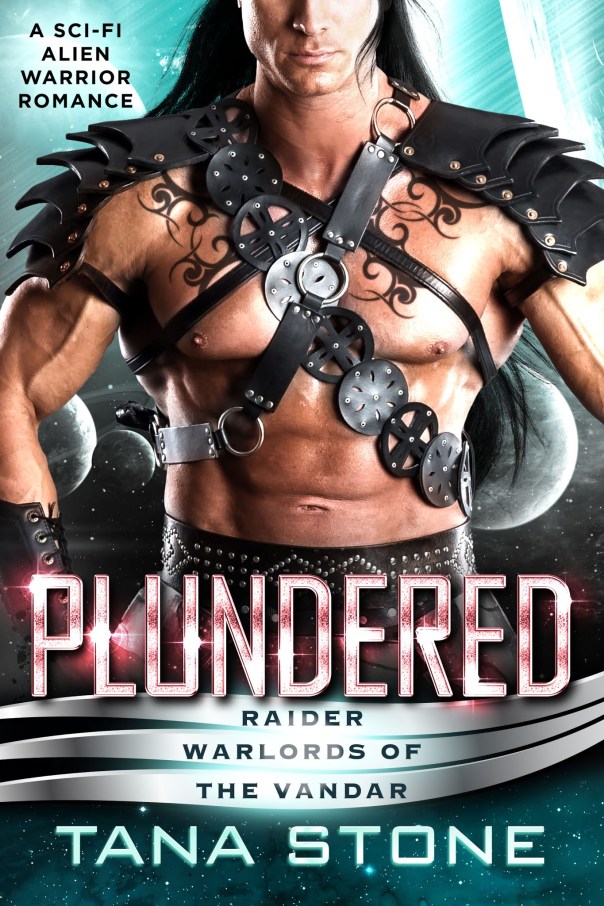 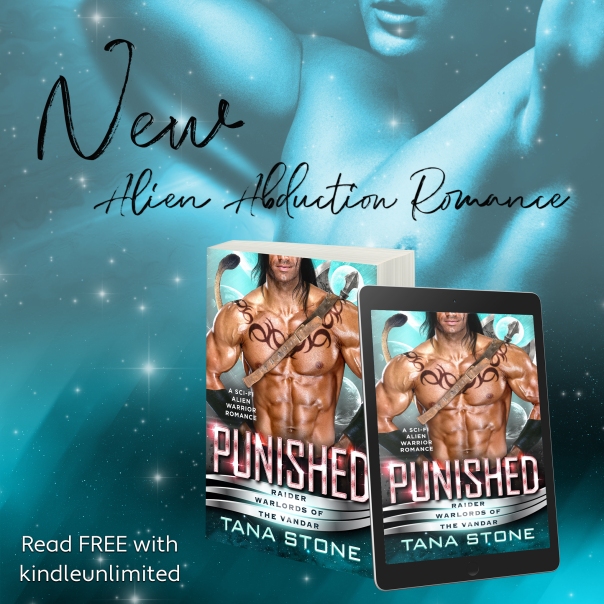 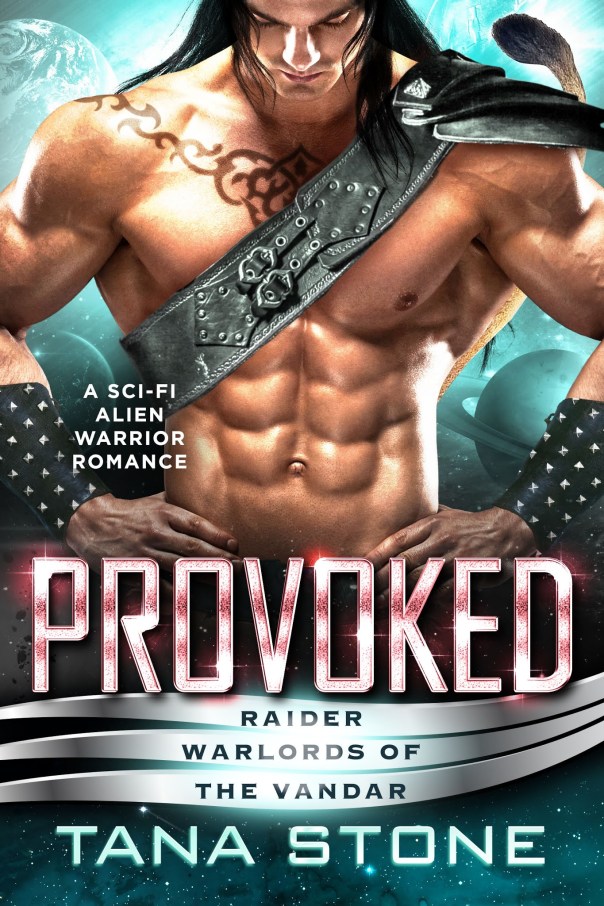 AUTHOR BIO
Tana Stone is a bestselling sci-fi romance author who loves sexy aliens and independent heroines. Her favorite superhero is Thor (with Aquaman a close second because, well, Jason Momoa), her favorite dessert is key lime pie (okay, fine, all pie), and she loves Star Wars and Star Trek equally. She still laments the loss of Firefly.
She has one husband, two teenagers, two neurotic cats and a brand new puppy. She sometimes wishes she could teleport to a holographic space station like the one in her tribute brides series (or maybe vacation at the oasis with the sand planet barbarians). 🙂
AUTHOR LINKS
BOOKBUB
AMAZON
INSTAGRAM
FACEBOOK
FACEBOOK GROUP
WEBSITE