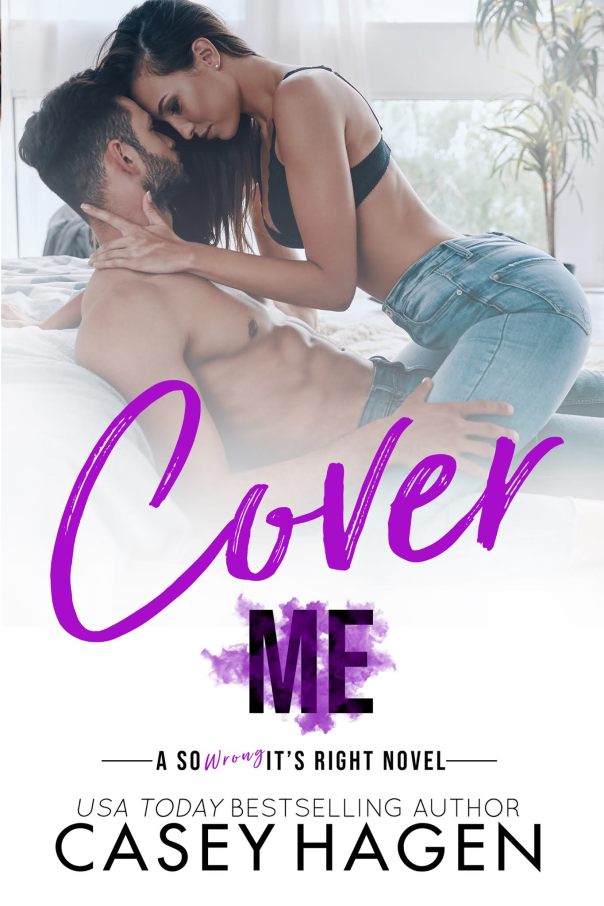 Title: Cover Me
Series: So Wrong It’s Right #2
Author: Casey Hagen
Genre: Contemporary Romance/Romantic Comedy
Release Date: November 17, 2020
BLURB
Trevor Myers knows how to make it big in the business world: a charming smile, connections, and balls-to-the-wall fearlessness. The master of all three, a partnership with his firm is all but in the bag. That is, until his boss dangles said partnership over him and his coworkers like a prize on a game show. Trevor will do whatever it takes to lock in what is rightfully his, even if that means calling in a doozy of a favor from his best friend that crosses bro code lines.
Piper Bradley is on the precipice of making a career-altering decision. Agonizing over impending change and letting go, Piper decides a weekend trip to clear her head is just what she needs to be sure of her decision. Before she can so much as dig out sandals and sunscreen for some much-needed fun in the sun, her brother calls in a favor from his best friend…Trevor Myers. Cover him for the weekend by being his other half while he schmoozes a corner office out of his unsuspecting boss.
Assumptions, surprises, followed by a battle of wills…and so begins the clash between Trevor’s playboy ways and the elemental pull of the girl next door.
ADD TO GOODREADS

EXCERPT
The door to the lake house flew open and a robust, boisterous man wearing a huge smile stepped out. “It’s about time you made it, Trevor, my boy. You and your beautiful lady here almost missed the couples’ massages.”
This Piper, despite her brief lakeside fantasy, did not have a hot dog in her future because she was apparently going to be naked in a room with an equally naked Trevor.
“Trevor?”
His smile slipped, but he tried covering it with a squeeze of her hand as he tugged her alongside him and up the front steps.
“We did not agree on naked,” she muttered from the side of her mouth while trying to maintain a smile for his boss.
He squeezed her hand again.
She dug her fingernails into his skin, satisfied with his brief flinch.
He reached out and shook hands with the man on the porch who’d just crushed her hot dog dreams. “Sorry, Mr. Williams. We hit a traffic snag about an hour outside of the city. A total mess.” He hooked his arm around her waist and pulled her forward. “I’d like you to meet my girlfriend, Piper Bradley. Piper, this is my boss, Davidson Williams.”
She reached out her hand and smiled despite the sheer panic fluttering in her stomach, trying to claw its way to her seizing heart.
Maybe Trevor could get naked first, set up on the table, covered with a towel. Then she could just hop over—er, maybe not hop, just in case he happened to sneak a peek. No woman looked flattering hopping anywhere naked no matter how firm they were.
Naked.
She had to be naked.
In the room with Trevor.
She was so going to kick her brother in the balls for getting her into this.
She’d send a condolence card to her mother for the grandchildren Rye would be unable to produce.
Maybe a fruit basket too. Or chocolate. Maybe a wine of the month subscription for a freaking decade.
“Nice to finally meet you, Mr. Williams.” Oh, look at her keeping her voice even like the thought of seeing Trevor’s naked bits or him seeing hers hadn’t completely stolen every last brain cell, practically leaving her the shell of a woman.
He took her hand in both of his. “Oh, none of that now. Please, call me Davidson.”
“All right, Davidson. Really, you needn’t have gone through so much trouble. I don’t mind if we skip the massage—”
He patted her hand. “Don’t be silly, my dear. I want everyone to start out relaxed and refreshed. I have a whole schedule of activities for the entire weekend.”
He leaned in and winked.
Hmmm, that winking thing seemed to be catching.
And she was so not relaxed. Her ass was so clenched she could carry needles between her cheeks.
“Actually, my lovely wife made the schedule, bless her. Unfortunately, a few things came up with the kids and their extracurriculars that called her away unexpectedly, but hopefully she’ll be back in time for you to meet her.”
Williams, though thick around the middle, stood tall and proud. His hair had gone almost completely gray. Between his build, his exuberance, his kids still being in school, and that gray hair, Piper might have had better luck nailing Jell-O to a wall than guessing his age.
She smiled. “I’d like that. What kind of extracurriculars are your kids in?”
“Well, this is refreshing! No one has ever asked.” He nudged Trevor with his elbow. “You found a good one here, my boy. You remember what I said about not letting her get away.” With his wallet in hand and opened to his pictures, he stood next to her. “We’ve got twin ballerinas. Sasha and Sabrina.”
What looked to be seven or eight-year-old, raven-haired beauties stared up from the picture. She’d seen their ballet gowns before. They’d been designed by Blush, one of her biggest competitors.
She schooled her features and pretended that she didn’t have more than a general interest in the girls or dance.
It was harder than she thought, but she managed it.
Just add actress to her resume.
“They’re stunning. You must be so proud,” she said as she handed back the wallet.
“Well, I can’t take all the credit, it’s mainly their mother’s doing. The woman is a saint. Anyway, enough about that, grab your bags and come on in. I saved your suite and the massage therapists are in there waiting. I’ll introduce you to everyone else after.”
“Yes, sir,” Trevor said with a nod and winning smile.
Such a boob.
Davidson led them to through to a room at the back corner of the place, nearest to the lake. At least that was something.
She’d have liked to take in the post and beam lake house, only the wood, the furnishings, the huge windows, they all disappeared in the horror of what they were about to do.
She’d have the best view while naked, in a room with Trevor, getting a rub down.
“I so loathe you right now,” she whispered.
“Yeah, well, get in line. I’m not too thrilled with me right now either.” His otherwise jovial tone had vanished, leaving harshness in its wake. She could almost believe he meant it. If he hadn’t eye-humped her when she came out of her building that morning.
Sure, he was mad about it.
Her eyes rolled so hard pain stabbed in her left eye.
She didn’t believe that for a minute. 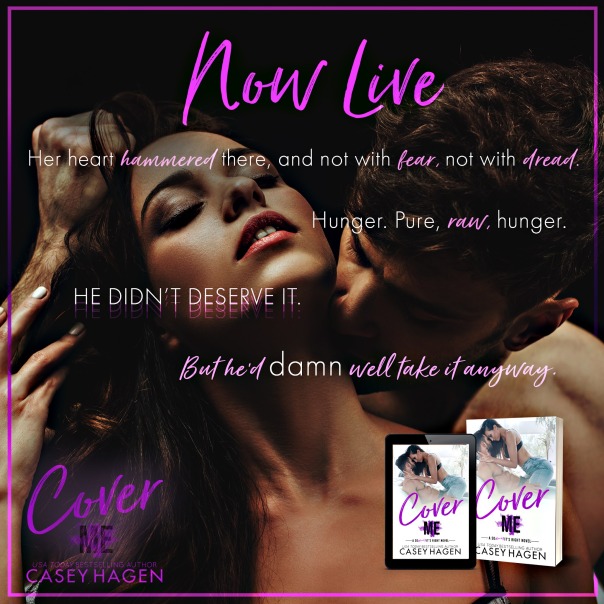 Casey Hagen pens her snarky, passionate stories from the salty air of Kennebunk, Maine. She’s a born and raised Vermont native, a New England girl to the core, with Ben & Jerry’s in her heart and real Vermont maple syrup pumping through her veins.
She’s the proud mother of three girls and a new, first-time grandma with an insatiable addiction to Fall Out Boy, and a new, rather concerning obsession with tattoos and piercings. Can you say “cool grandma?”
The inked and pierced grandma spends her time tucked away in her office, coated in cat hair, alternating between tearing her hair out trying to find the perfect words and being one step ahead of her three scheming fur babies she is positive are plotting her demise with every swirl around her ankles at the top of her office stairs.
She loves writing stories about real people, with complicated histories, relatable everyday problems, and giving them the hard-won happily-ever-afters they deserve.
And she thanks every last one of you who picks up one of her stories.
Casey is done talking about herself in the third person.
*Casey out*
AUTHOR LINKS
FACEBOOK PAGE / PROFILE / GROUP
INSTAGRAM / AMAZON / APPLE BOOKS
BOOKBUB / GOODREADS / YOUTUBE
SPOTIFY / PINTEREST / TWITTER
NEWSLETTER / TEXT ALERTS / WEBSITE 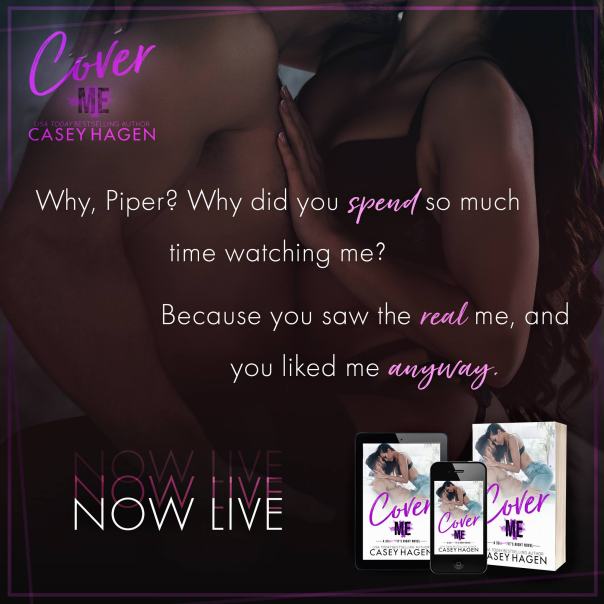