RELEASE BLITZ – Snowed In With the Firefighter by Victoria James

Today we have the release day blitz of Victoria James’s Snowed In With the Firefighter! Check out this gorgeous new romance and be sure to get your copy today!

Title: Snowed in With the Firefighter

About Snowed In With the Firefighter:

Dr. Melody Mayberry’s life just took a turn that’s left her questioning everything. Where better to hide out than the remote family cabin in the mountains? The last thing she expects to find there is her swoon-worthy brother-in-law, the one man who may have more baggage than her.

Finn Matthews is not ready to face the fact that the recent injury he sustained in a fire may have ended his firefighting career. He’s not interested in sharing the cabin with anyone, let alone Melody, and their family just texted with yet another unwelcome surprise—they’ll be there Christmas Eve.

To keep their meddling family at bay, the two team up to fake a little holiday cheer. But between ridiculously competitive Monopoly games, marathon Christmas decorating, and a storm that strands them together with nothing but a fire and a warm couch, they realize something major—their fake holiday cheer isn’t feeling so fake anymore, and that’s something neither of these two Grinches expected…

“Christmas with all of them? Decorating? He pointed at Melody with his coffee mug. “This is your fault. You can’t just go around saying our worst nightmares out loud and expect them not to happen.”

She gasped. “That’s ridiculous. And not at all how the world works.”

He shook his head. “You believe what you want. We’re stuck either way. The worst part is they’re all…” He grimaced. “Nice. Like, too nice. And over-the-top happy. And this is their cabin, so we can’t even say no.”

She groaned. “I know. They probably think they’re doing us a favor. We have no choice. Other than just run away, which is still a possibility, but that’s too obvious at this point. I guess we’re doing Christmas and we have to fake being happy.”

She tilted her head, her eyes narrowing on him. “You’re about as happy as I am.”

Her mouth dropped open. “What is that supposed to mean?”

He sipped his coffee slowly, deliberating whether or not he wanted to start an argument or end this conversation. If he ever hoped to get her to open up, an argument probably wasn’t the way to go. “I’m just saying, you seem really unhappy, and it seems like I’m not the only one who thinks that. Everyone must. That’s why they’re coming up here. They probably already assumed you wouldn’t go back for Christmas.”

“How do you know this is about me? If I were them, I’d be more worried about the person who’s been locked away up here for months,” she said with a triumphant little smirk, which he found inexplicably adorable.

He grunted. “Well, when they get here, they’ll see just how happy I am.”

She shook her head and crossed the kitchen, grabbing a notepad and a bunch of different-colored pens from her purse. He straightened up, worried, as she started writing. “What is all that?”

“Planning. Faking happiness and Christmas cheer takes a lot of work. No one will believe us. No one will believe you, especially with that beard. So now we’re going to start a list of things to decorate and get ready so no one thinks we’re miserable. We have three days to get happy.”

He walked over to the island. “Can’t a man let his facial hair grow without constant commentary? This doesn’t mean I’m miserable.”

She gave him a side-eyed glance and continued with her notes. “You need to shave it off. They won’t stop bothering you until you do.”

He turned his attention to what she was writing. The page was divided into columns, and the heading for the first column was Happy Decorations in red ink, underlined a few times.

The next column was Happy Food.

He didn’t even know what was happening anymore. “I didn’t know there was happy food.”

She paused and gave him a pitiful glance. “Of course, because you’re not happy. Hot chocolate, eggnog, gingerbread cookies…oh, marshmallows for the hot chocolate—happy people love adding those—and we should get some kind of pre-fab gingerbread house for Isabella.”

“I think happy people make them from scratch,” he said, just to bother her.

She shook her head, still writing. “We don’t have time.”

“None of that stuff is going to make people think we’re happy,” he said, pointing to the ridiculous list.

She put down her pen with a theatrical sigh and turned to him. “Do you have a better idea? I mean, the only thing I’ve heard out of you since we got the text is blaming me for bringing the family down onto us and your self-consciousness about your beard. We’re stuck in this situation together, so it would be really nice to have some cooperation. Think outside the box. Like, look at this chart I’m making. I think we should make more coffee and brainstorm.”

He was barely following her train of thought. “What? I’m not making a chart on how to be happy, Melody. I know how to be happy. I’m a very happy person. No color coding in the world is going to make me look happier,” he snapped.

She gave him a side-eye and a smirk. “Sure. So happy.”

He ran his hand over his beard and forced himself to not sound irritated. “Also, I’m not self-conscious about my beard.”

She raised a brow and picked up a green pen. He had the uncontrollable urge to grab all the pens and throw them in the snow.

“You know what this is?” he asked, wondering how he hadn’t seen this all along.

She finished her coffee and let the pen fall from her hands before crossing her arms over her chest and turning to him again. “Let’s hear it. Hopefully, it involves shaving the beard.”

He frowned and ignored that comment. “Well, you know how they’re all sitting there plotting about us. Trying to set us up?”

She frowned. “No, I don’t think so. I think they got the message. Nothing would ever happen between us.”

He took a step closer to her, slightly irked that she felt that way. “Fine. Wishful thinking. Ben’s trying to get me back because this is what I did when Molly moved to Shadow Creek.”

Her mouth dropped open. “You set them up and meddled?”

He shrugged. “Yeah, it was pretty bad. I literally threw him under the bus. Our mother was coming out of surgery, and I told her they were engaged. I’m basically responsible for their entire relationship.”

She tucked a strand of hair behind her ear. “I’m sure that’s a gross exaggeration. But anyway…so? What does this have to do with us?”

“Ben and Molly must actually think they can do the same thing to us. What I did took talent. The whole idea is ridiculous. Way too much snooping in our lives. They won’t let you go away for the holidays and run from whatever it is you’re running from, I’m not allowed to grow facial hair without a doctor’s note, and then they make it obvious they’re trying to set us up. Clearly the only logical thing for us to do is actually pretend their dumb trick worked.” He leaned back and grinned. “We pretend to be a couple for the holidays.”

She choked on her coffee. “Are you kidding me?” she managed in a strangled voice, her eyes wide.

He wasn’t sure whether he should laugh or be insulted. “Why would I lie about this? Think about it: we’ll get the ultimate victory when Christmas is over, and we tell them it was all a joke. As if you and I would ever get together.”

Victoria always knew she wanted to be a writer and in grade five, she penned her first story, bound it (with staples and a cardboard cover) and did all the illustrations herself. Luckily, this book will never see the light of day again.

In high school she fell in love with historical romance and then contemporary romance. After graduating University with an English Literature degree, Victoria pursued a degree in Interior Design and then opened her own business. After her first child, Victoria knew it was time to fulfill her dream of writing romantic fiction.

Victoria is a hopeless romantic who is living her dream, penning happily-ever-after’s for her characters in between managing kids and the family business. Writing on a laptop in the middle of the country in a rambling old Victorian house would be ideal, but she’s quite content living in suburbia with her husband, their two young children, and very bad cat.

Sign up for Victoria’s Newsletter to stay up to date on upcoming releases and exclusive giveaways, follow her blog for daily antics and insight into her daily life, and get to know her on twitter and Facebook. She loves hearing from readers! www.victoriajames.ca

COVER REVEAL – Michigan for the Winter by Dr. Rebecca Sharp 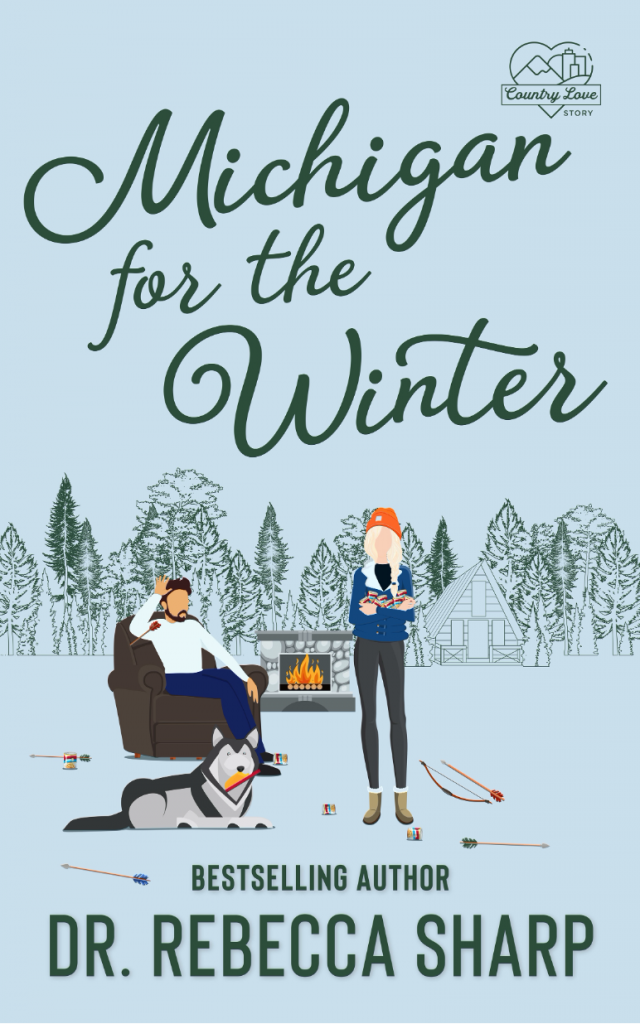 From bestselling author, Dr. Rebecca Sharp, comes a sexy, neighbors-to-lovers romantic comedy…
Ryan Finan needed a change of scene.
No more warmth. No more wooing. No more women.
Needing to get over what the last woman did to him, he’s fled to Michigan for the winter.

A secluded cabin, a wood stove, a bottle of scotch, and guaranteed solitude are all he needs… until Winna Madden recklessly collides into his path—and other parts of him. With her fresh beauty, captivating awkwardness, and far too much talk of freshly jerked meat, Ryan struggles to give his temporary neighbor a necessary cold shoulder.

Having lived in this neck of the woods all her life, Winna knows the gorgeous recluse isn’t prepared for a Michigan winter—nor for the kinds of harsh truths it brings. She’s determined to be a good neighbor—no matter how much he grouses.

As temperatures plunge, their walls tumble down faster than the snow. Soon, the only thing left is a wild desire burning between them.
But Ryan’s stay always had an expiration date. When it arrives, will he walk away? Or will the warmth he found with Winna tempt him to stay? 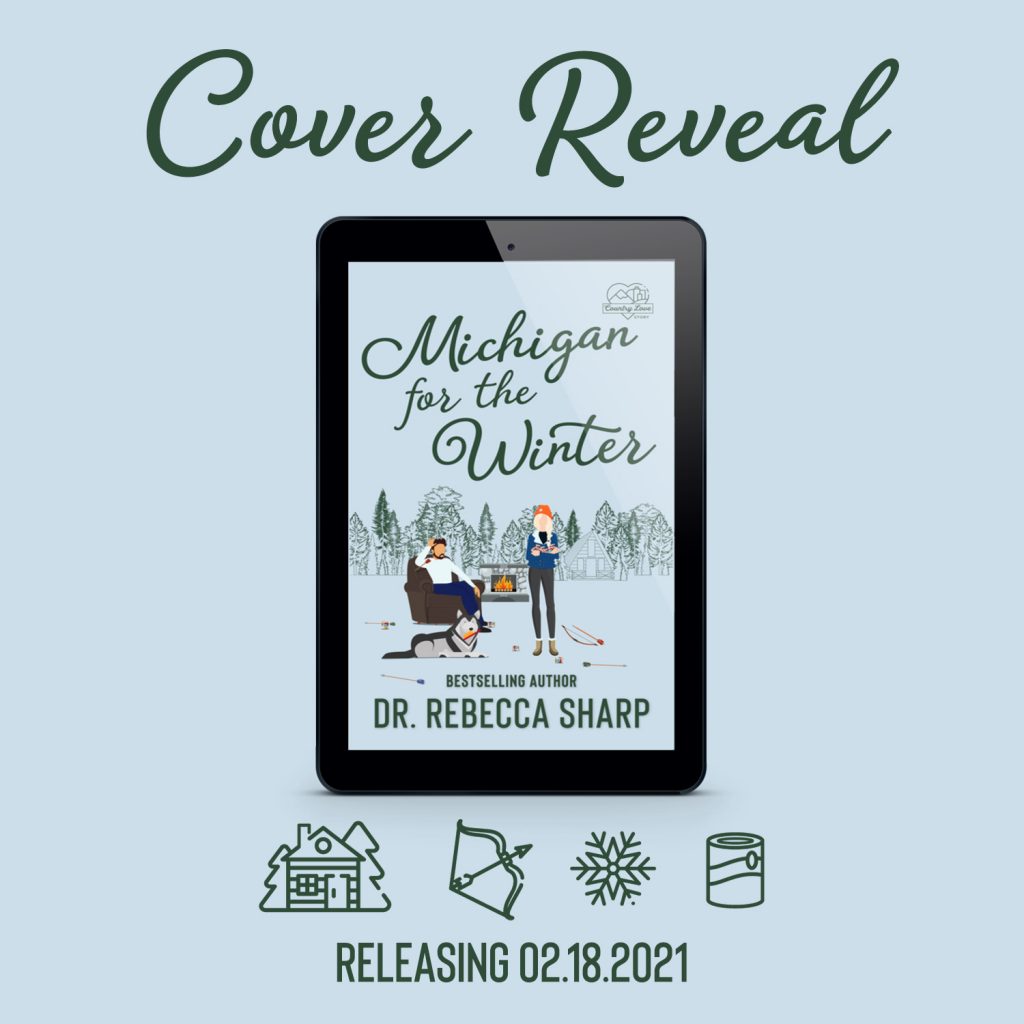 To celebrate Michigan for the Winter’s cover reveal, Rebecca Sharp is giving away a $25 Amazon gift card. Stop by her Facebook page to enter!
http://www.facebook.com/drrebeccasharp 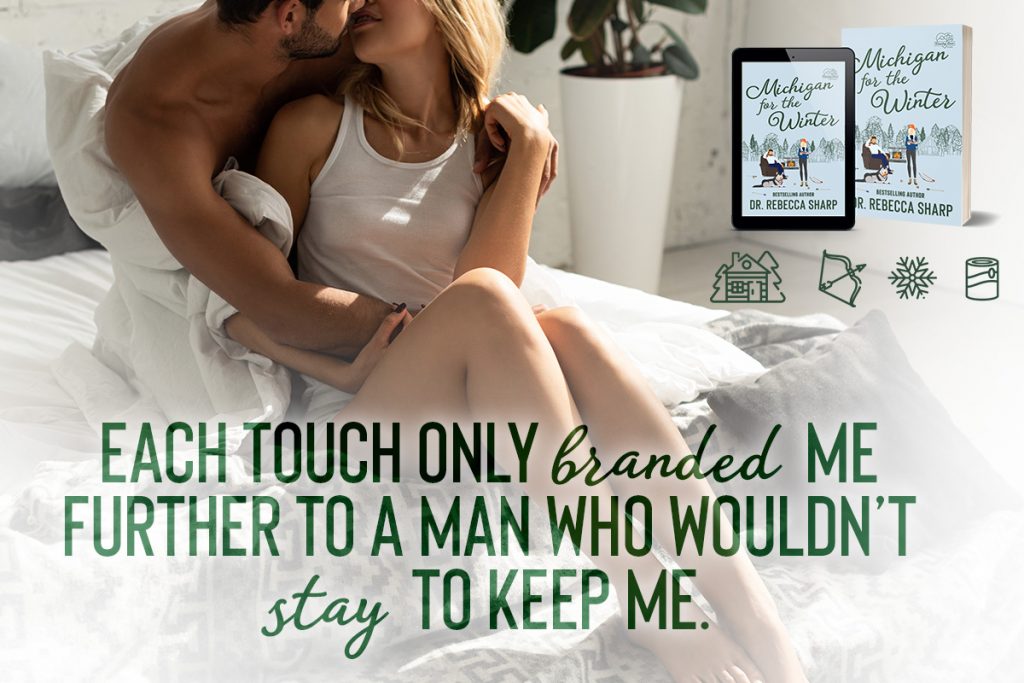 Dr. Rebecca Sharp, while using a pen name, is actually a doctor living in Pennsylvania with her husband – the love of her life.
She enjoys working in her practice with her father as well as letting her creativity run free as an author. Growing up she’s always loved a good love story and finally decided to give writing one of her own a go.
After graduating with her doctoral degree, she now enjoys spending that thing called free time traveling with her husband, cooking, and knitting.