Title: Luca
Series: Project Arma #1
Author: Nyssa Kathryn
Genre: Romantic Suspense
Release Date: May 26, 2020
Blurb
Former Navy SEAL, Luca Kirwin, is both well trained and deadly. Recruited into a non-government sanctioned project, he was turned into a weapon. Now, with the help of his team, Luca must find every last soul who was responsible for the project and make them pay. When a new neighbor with alluring green eyes moves in next door, his instincts tell him to trust her – but could she be one of the enemies they’re searching for?Evie Scott can’t afford a relationship. She was in a one once and it almost killed her. Running and hiding has become her normal. But when her new neighbor gives her a job in the small town of Marble Falls, avoiding him becomes almost impossible. While protecting her secrets, Evie begins to suspect Luca has his own. Can he protect her from her past or will it destroy them both?
ADD TO GOODREADS 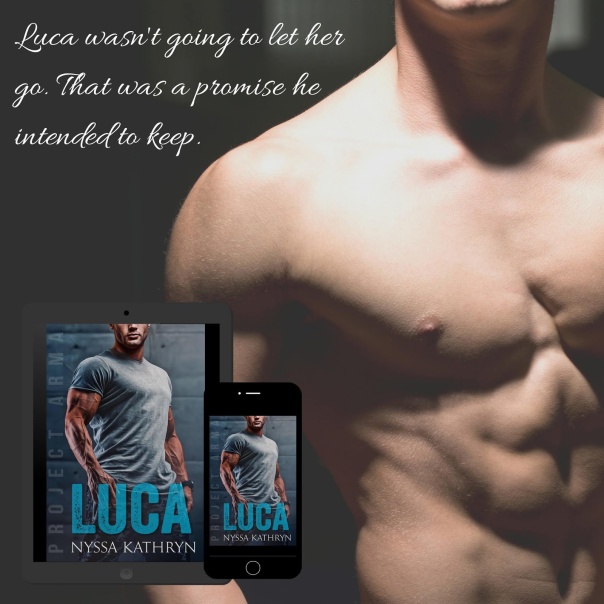 Increasing her pace, a chill worked its way through Evie’s limbs. The sun was almost finished setting, and that meant it would be dark soon. Evie hated the dark. She was automatically at a disadvantage with Troy in the dark. Another disadvantage she should say. He could still see, she was blind. It was
an extra layer of protection for him, like he needed that.
Luca had offered Evie a ride, but she’d declined, hoping the fresh air would clear her mind. As the echoes of her steps filled the air, she started to regret her decision. At this very moment, she could be sitting next to him in
his warm car, breathing in his musky scent.
Evie could almost hear his deep voice in the back of her mind. Feel the vibration of his words. A smile touched Evie’s lips at the thought.
No. What was she doing?
Shaking her head, Evie pushed down the feelings. Feelings were dangerous. They were the reason she was where she was in her life at the moment. Luca was dangerous to her. She had to keep her distance, no matter how much her body wanted her to do otherwise.
As the hairs on the back of Evie’s neck stood up, she suddenly had the feeling of being followed.  Subtly, as to not draw any attention, Evie turned her head to look down the road behind her. Nothing.
Taking a calming breath, she forced herself to maintain her pace, even though her legs wanted to race. She could see her house up ahead. Then she would be inside with the semblance of safety. Not far to go.
A rustling noise behind Evie sounded. This time she did stop. Turning, she stared out to the empty street. Again, there was nothing. About to turn back, the sight of fresh shoe tracks in the mud next to the path caught her
attention.
Turning back to her house, this time, she did increase her pace.
Stop being stupid, Evie, there are dozens of people who use this path.
So why did it stick out to her?

SIGN UP TO NYSSA’S NEWSLETTER & GET THE PREQUEL FOR FREE 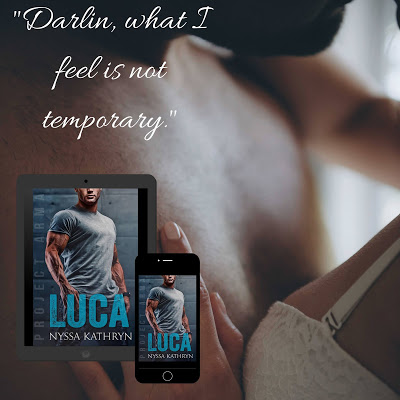 Nyssa Kathryn is a romantic suspense author. She lives in South Australia with her daughter and hubby and takes every chance she can to be plotting and writing. With a background in teaching, Nyssa finds that she can let her mind wonder in the writing world. Always being one to read and write when she should have been working, Nyssa decided to take the leap and make writing her career.

Nyssa has always been an avid reader of romance novels. As a teenager she would lose herself in Young Adult and Contemporary Romances. As she got older her interest moved onto the romantic suspense genre. It was from here that she started dabbling in writing. Nyssa wrote her first novel in 2017
but didn’t start publishing her work until three years later. Working in the industry has solidified Nyssa’s love for all things romance.