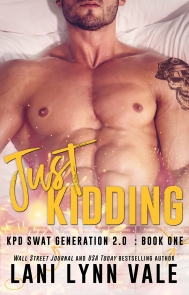 Let’s do a calendar, they said. It’ll be fun, they said.
Well, they—i.e. Kilgore Police Department’s public relations specialists—were wrong.
Now, every time Dax Tremaine walks around a corner, the women of Kilgore, Texas can’t help calling him Mr. January.
Mr. January, can you fix my flat tire? Mr. January, can you cuff me? Mr. January, can you sign my boob?
It goes from bad to worse when even on a SWAT call, the women won’t stay away.
***
It was the worst time of her life. Rowen Roberts had finally admitted to herself that the man she loved would never love her back. She was just fired from her job for violating client confidentiality, and to make matters worse, she’s held up at gunpoint in a convenience store where she only wanted some ice cream to help mask the pain.
The moment the gun is pressed to her forehead, she knows she has a decision to make. Follow the rules and maybe possibly live, or go down swinging where at least she can salvage just a little bit of her dignity.
And when Mr. January himself tells her to do what the gunman says, she’s had enough. Rowen has never really been a girl that does what she’s told. Mr. January won’t have to save her. She can dang well save herself.

Sometimes people come into a person’s life and make their heart skip a beat. Those people are called cops. Well, one cop in particular. A SWAT officer for the Kilgore Police Department calendar. He was leaned back in his squad car, shirtless, and giving her a smile that was completely between them. A smile that hinted at what he wanted to do to her late. When she scrounges up the courage to ask him out after the photoshoot, he laughs in her face. Well, screw you, too, Mr. February.
***
Derek Roberts never really paid attention to the photographer. She was a mousy girl who dressed like a twelve-year-old girl. Her tight leggings, extra baggy Star Trek t-shirt denoting her a Klingon captain, and her surprisingly clean chucks didn’t leave much of an impression. Now, the outfit that she was in weeks after he rebuffed her. Yeah, now that caught his attention. Too bad that happens when he’s trying to save her from what’s sure to be death thanks to an unhinged native Texan who’s convinced she was the reason he lost his last chance at a million dollars. When he tries to save her, she tells him she’d rather take a cattle prod to the forehead than go anywhere with him.
Challenge. Accepted.

Lani Lynn Vale is a Wall Street Journal and USA Today Bestselling Author of over thirty titles. She is married with three children, two dogs, to cats, a donkey, and a couple (a couple meaning over twenty) chickens. She hails from the Great State of Texas. When she’s not writing, you can find her curled up in her favorite chair reading.
To find out more about her, check her out here:
Website | Facebook | Twitter
Instagram| Goodreads | BookBub