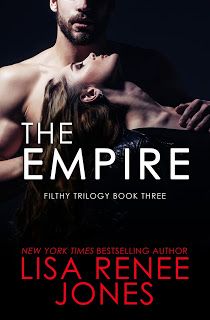 Passion. Lies. Family.Eric and Harper will feel the push and pull of a dynasty gone wrong. Secrets remain. Danger is everywhere. And the pull of their forbidden love will not be ignored.

Can they survive their enemies and find a path to love and forever? 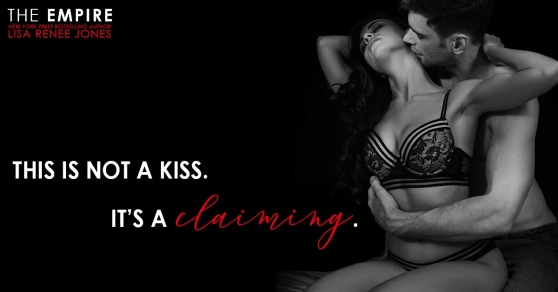 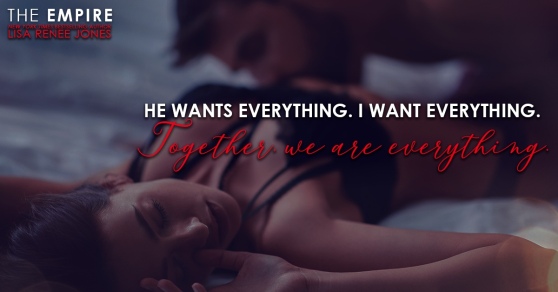 Eric shoves me against the wall of that alcove, and with that window beside us, overlooking the city, his big body pressed to mine, his kiss not only devours me—it speaks to me. He’s my one person and I’m his. I feel that in his touch. I feel that in the way we connect. I taste it in his kiss. I don’t know where this leads us. I don’t know if it means we can overcome the Kingston family, but I know we can overcome his demons. He doesn’t, though. I taste that in his kiss as well. There is torment, a feeling like he’s bad for me. That he shouldn’t want me and the only comfort I find in this and where we’re headed is that he isn’t pushing me away—he’s pulling me closer. And I will hold him tighter.

I sink into the hard lines of his body, slide my hands under his shirt, hard muscle flexing beneath my palms, the thick ridge of his erection pressed to my belly. God, how I want him, how I ache for more, and the next lick of his tongue just about undoes me. I tug on his shirt. “Take it off,” I order, wanting to feel him closer.

He reaches over his head and tugs it free and then fixes me in one of those scorching blue-eyed stares, the way he had the first night we met, and I’m melting right here in this office for him. He tugs my shirt over my head and unhooks the front of my bra, his gaze raking over my naked breasts, my nipples puckering beneath his inspection, and my sex clenching, empty, so very empty without him. “Better?” he challenges, his attention settling on my face.

My hands come down on his upper arms, the jaguar on his right shoulder, reminding me just how much he wants to deny his heritage. It reminds me just how much this family burns him alive. “A little.” I slide my hands down his hips and boldly stroke the line of his zipper, the thick ridge of his erection.

He groans, one of his hands covering my hand, the other hand catching my hair, a rough pull as his mouth closes down on mine again. And then he’s devouring me again and I love it. I love that I’ve drawn this deep, guttural reaction from him. I love that he’s all here with me, not in his own head, not doubting how good he is for me. Not swimming in the ocean of numbers in his head. Not in the hell of the Kingston family.

This drives me. I want to push him. I want to keep him here, with me. I squeeze his erection through his pants and whisper, “Why aren’t you inside me already?”

He turns me, pressing me to the wall like he had in the cottage, his big body wrapping my body, his hands on my breasts, fingers teasing my nipples, lips at my ear. “You were always sweeter than revenge,” he promises. “Always more addictive.” He plucks at my nipples. “So fucking addictive and I hated you for that.”

He reaches for my zipper and I squeeze my eyes shut. I don’t have to ask what he means. I understand. From the moment we met, he was in my head, in my heart, his touch imprinted on my body. The man I compared all others to, and they came up short. “I hated you, too.”

His hands press under the denim at my hips. He caresses them down my legs and then his arm is wrapping my waist and he’s lifting me. In a few quick moves, I’m naked and he’s standing at my hips, one palm possessively on my backside. The other on my belly. “Do you hate me now?” His fingers walk down to my sex and he cups me.

“Yes.” I look at him. “I still hate you for having this much control over me.” He slides his fingers along the seam of my sex, sending sensations darting through my body.

“Is that a bad thing?” he challenges, his palm squeezing my backside, his fingers slipping inside me.

“Yes,” I say, panting my way through that one word and somehow adding, “Because when I look in your eyes, like I am now, I see expectations. The wrong ones.”

He scowls and suddenly he’s turning me, pressing my back to the wall, his legs caging mine. “What does that mean?” he demands.

“It means as long as you expect to hurt me, as long as you expect you being a savant, you being different from me, to make us less, we will be. It means, you expect us to fail and so we will.” I swallow hard, my hand planting on his chest, his heart thundering beneath my palm, pounding out an emotional beat. “You think I can’t handle who and what you are. You still think I’m the princess and you’re the bastard.”

Heat rushes over me, through my body, over my skin and settles in my heart and my sex. “I fucking need you, too.” 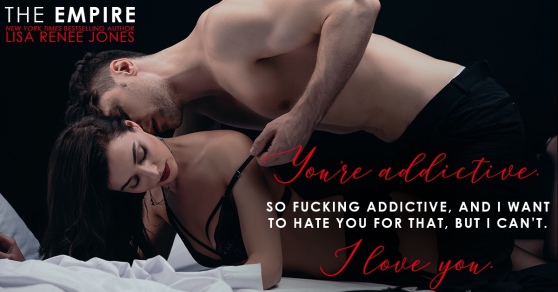 Bloody hell….. I’m in the mother of all book hangovers….. I loved the final read in this series.

Lisa Renee Jones is one of my favourite romantic suspense authors and she finished off the Filthy Trilogy much as I’d hoped.

Eric and Harper have had one hell of a time and to see how everything they faced was gonna shape their relationship and finally find out what the hell was behind all that had been going on until now made for good reading.

A couple of things I thought I’d figured out – one I sort of got, sorta… the main threat was fairly obvious but it was the reasons behind it all that stumped me. The secret that left us on tender-hooks at the end of The Princess wasn’t quite what I expected and not as awful as I’d imagined it could be. I liked how the tension and suspense was kept up at the start of the book but didn’t consume every chapter – and yeah, there was a lot of sex but hey, it’s LRJ, and she writes those scenes really well!! 😀

I love how this series kinda intertwines with the Dirty Richbooks (but you could read the trilogy as a standalone and still understand what was going on, you’d just miss out on knowing who the other characters are and where they fit in to Eric’s circle/life) and the addition of the Walker Security team as well as Grayson and Mia added to my overall enjoyment of the reads.

I’ve heard tell that a certain burly Walker Security team member is gonna be getting his own book and I cannot wait to see who snares his attention!!!

IMHO the Filthy Trilogy is a definite must read, especially if you’re a fan of Ms Jones’ books. The Empire gets another 5* from me and I look forward to catching up with Eric and Harper further in the Dirty Rich series. 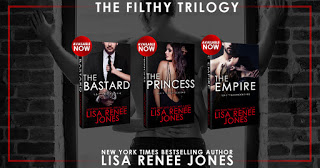 New York Times and USA Today bestselling author Lisa Renee Jones is the author of the highly acclaimed INSIDE OUT series.
In addition to the success of Lisa’s INSIDE OUT series, she has published many successful titles. The TALL, DARK AND DEADLY series and THE SECRET LIFE OF AMY BENSEN series, both spent several months on a combination of the New York Times and USA Today bestselling lists. Lisa is also the author of the bestselling WHITE LIES and LILAH LOVE series.
Prior to publishing Lisa owned multi-state staffing agency that was recognized many times by The Austin Business Journal and also praised by the Dallas Women’s Magazine. In 1998 Lisa was listed as the #7 growing women owned business in Entrepreneur Magazine.