The Whole Package
Movin’ On #1
by Marie Harte

Vets on the Go!

They didn’t plan to become heroes…

When former Marine Reid Griffith started his moving company, hiring only veterans, he just wanted to help his brother Cash adjust to civilian life. But when Cash is caught taking down a thief mid-robbery, the video goes viral. Suddenly Vets on the Go! are local heroes…and Reid’s phone explodes. He needs help handling the deluge of interest—fast.

When PR expert Naomi Starr sees the news spot of a muscular vet expertly apprehending a bad guy with duct tape, she knows Vets on the Go! is just the thing to revive her career. There’s just one problem. Naomi has vowed to never mix business with pleasure. Ever. Again. And tall, dark and brawny Reid Griffith is a whole package of temptation.

Once he and Evan walked outside of the warehouse to join the others, Reid joined Naomi and stared down at her notes. “Any more advice for me?”

She shook her head and turned, caught unaware that they stood so close. She faltered when one of her heels wobbled, and Reid caught her.

They both froze, staring at the other. She wondered if he felt the heat between them and thanked God her blazer covered her now erect nipples. What was it about this man that put her every nerve on alert?

His gaze slipped to her mouth before finding her eyes again, and she found his light-gray stare unnerving. Talk about intense.

“F-fine. Sorry.” She went against every instinct she possessed and took a step back, disappointed he let her. “Thanks.”

“Yeah.” He continued to stare at her and tucked his hands in his pockets.

She refused to look down at his jeans, not wanting to know if he’d been as affected as she still was by that simple touch.

“Man, you are really pretty.”

She felt her cheeks heat. “Reid.”

“Just sayin’.” He smiled, and she wanted to fan herself. “So, any advice, Starr PR?”

“Just be yourself.” She smiled back, pleased when he seemed entranced. “Your interviewer is Rhonda Peters, and I’m sure she’ll be in love with you five seconds after meeting you.”

“Please. You’re attractive and you know it.” There, I got it off my chest. “Which is terrific when trying to sell something. You see a commercial with a gorgeous woman who barely looks at a pair of jeans slung over the corner of her bed. But you remember that commercial for jeans because she stuck in your mind.”

“Nah. If she’s not wearing them, I’m not interested. Wait. I am, but not in the jeans.” He laughed. “So, do you ever wear jeans?” He glanced at her suit. “I imagine you look great in anything.”

Before she let herself be drawn into flirtation, she mentally backed away. “Perfect. Use that with Rhonda, but be careful, or she’ll take you up on your offer.”

“That bedroom voice, the seduction. It’s good, but you might want to throttle back how hard you push. Rhonda will be overwhelmed.”

“But not you.” He studied her. “What would it take to overwhelm you, Naomi?”

Hearing her name on those sexy lips threw her for a moment. Unfortunately, he noticed, because he gave her a sly smile.

“Me? Nothing. I never mix business with pleasure. Ever.” Not anymore.

“Huh. Then it’s a good thing you and I only have a three month contract, isn’t it?”

Wait. That hadn’t gone as planned. “What?”

Reid laughed. “I’m kidding, Naomi. I agree. Sex and business don’t go together. I’m just yanking your chain. You’re too easy.” He held up a hand. “To rile. Too easy to rile. Otherwise you’re a tough woman. Not meaning that in any way offensive, either. Having to work for something makes it more worth it, you know?”

She scowled. “I’m losing track of this conversation. What exactly do you mean?”

Reid lost his smile. “Heck if I know. Look, in the Marine Corps, fraternization is a no-no. You don’t make friends with your boss, and you aren’t supposed to sleep with him or her either. I get you. But Naomi, you’re not my employee.”

“You’re my client,” she said, working hard to mean what she said. “It’s unprofessional to get romantically involved with you.  I’m qualified for this job because I’m good at what I do, not because I’m pretty and can flirt a good game.”

He frowned. “Don’t think I ever said you weren’t qualified.”

She wanted to smack herself for going off on a tangent and blushed three shades of red. Her face hurt, it felt so hot. “God, ignore me. It’s been a long day. I’m sorry for digressing. I just meant we need to keep things professional, that’s all.”

Reid studied her for a moment then nodded. “Hey, I respect that.” His voice gentled. “I respect you, you know. Don’t worry. This will turn out just fine tonight.”

She nodded, about to apologize for turning his comments into a diatribe about unfair work practices when Rhonda’s team showed up.

Instead, she sighed. “Break a leg, Reid. And just remember, be yourself.”

Unfortunately, he did just that and had Rhonda and half her team fawning all over him. The team photographed well, and the TV crew seemed enchanted with the twins and Jordan. Finley had the lead cameraman laughing and the sound guy demanding another trick with Finley’s magical quarter.

Their outdoor shoot had also attracted several onlookers, and word spread that the heroic guys from that stopped-burglary earlier in the week were on TV again.

The interview couldn’t have gone better. The photographers loved working with everyone, and the large moving van advertised their contact number and name for everyone to see.

But Rhonda, damn her, was getting way too cozy with Reid. Which wasn’t Naomi’s problem.

Gah. What the hell is wrong with me? He’s not a boyfriend or potential boyfriend. He’s a client.

She turned to see an old friend, one of the station managers at the television station. “Morgan, great to see you.”

She accepted a kiss on the cheek and gave him one in return.

A few years her senior, Morgan had dated her twice after her breakup from Tanner. Though he’d been a nice guy, there was no chemistry, and his kisses had been mediocre and rushed. Before anything went further, she’d broken it off, claiming too much on her plate to get serious.

Morgan had a terrific smile and a slender build. A nice guy. Maybe too nice. He grinned. “You get better looking every time I see you.”

“Flatterer.” She smiled. “So how have you been?”

They made small talk while she watched the Griffiths get their pictures taken and get interviewed. Cash put Reid in a headlock, which hadn’t been in the script. But everyone laughed as more photos were taken. And of course, Cash’s arms bulged while Reid slugged his brother in the gut where he could manage a punch.

The photoshoot turned into a huge party with everyone enjoying themselves, then transitioned to Ringo’s Bar down the street.

By that time, she’d agreed to meet Morgan there to talk some more. He claimed to have a lead on a business that needed her help, though his eyes told another story. But it made her feel better to put even more distance between herself and Reid, because she swore she could feel the man watching her with Morgan, even as she watched Rhonda not so casually wrap her hand around his arm. 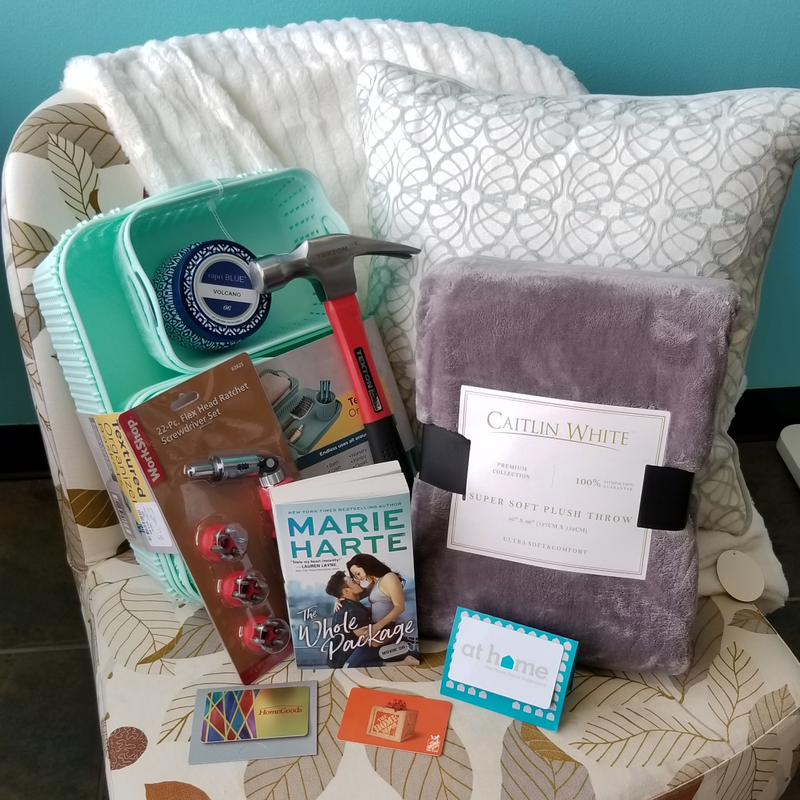 If there’s one thing that we can all agree on, it’s that moving SUCKS. It seems like everyone’s got a moving gone wrong story—did your car break down halfway across the country? Or all of your dishes broke in transit? Or you get there and the place is infested with bugs? No matter what happened to you, we want to hear it!

We’re celebrating the release of the first book in Marie Harte’s new Movin On series, The Whole Package, with a sweepstakes! Learn how to participate below, and you’ll be entered to win that awesome gift package on the right!*

STEP ONE: Tell us your true moving horror story on social media (Twitter, Facebook, or Instagram) using #movinonseries by February 3. Or you can email your story to casablanca@sourcebooks.com. We’re looking for stories between 50 and 200 words. If you use Twitter, feel free to utilize the thread function!

STEP TWO: On February 4, the Sourcebooks Casablanca marketing team will choose our top five favorite stories and put it to all of YOU to vote for the best story!

STEP THREE: Get your friends, family, movers, cats, and coworkers to vote for your story! We’ll announce the winner on February 15!

One (1) Grand Prize Winner will receive the following:

It’s a case of ‘no questions asked’ when it comes to buying and reading a new release from Marie Harte – I’ll admit that Marie is, without doubt, one of my favourite authors.

The Whole Package is book one in the new Movin’ On (Veteran Movers) series and it was a really good read.

My only wee thing was that there was a lot going on in this first book. We are introduced to all of the veteran moving crew as well as following Reid and Naomi’s story but, in saying that, this is something that Ms Harte has done with other series and in the long run it works as we’ve kinda got a handle from the outset on the characters still to get their own book.

Reid is a great guy but he takes everything on himself and is so focused on the new business and looking out for his brother that he’s not got much of a life of his own.
Naomi is wholly focused on her own up and coming business and having been bitten in the past when it came to relationships, she’s not living much of a life either.
The attraction between this pair was almost instant although both were at first hesitant to act on any feelings they had. When they eventually give in it’s not supposed to be more than fun and definitely not long term…….

I really enjoyed The Whole Package and am definitely looking forward to Smooth Moves which is the second book in the series and Cash’s story!!

She’s a confessed bibliophile and devotee of action movies. Whether hiking in Central Oregon, biking around town, or hanging at the local tea shop, she’s constantly plotting to give everyone a happily ever after. Visit http://marieharte.com and fall in love.