The Runner’s Daughter
by Jessica McCrory

Signed Paperback pre-order is up on Jessica McCrory’s website!
Pre-order before February 1st and you will receive a FREE kindle version of The Runner’s Daughter prior to the release!

Check out the cover for the latest book in Jessica McCrory’s Bastards of Corruption Series!

FBI agent Caid King has fought long and hard to end the corruption within his organization. After the fall of Clayton Matthews, he returns to New York with his head held high and his eye on the next target. He never could have imagined that the dangerous man he’s set his sights on would have ties to the beautiful blonde he found himself instantly drawn to.

Jemma Saige thought she had it all figured out. Her rules for survival were simple. Keep your head down, your bags packed,  your running shoes on. But when she meets a man at her local gym, their attraction threatens to break the last and most important of those rules:   don’t get tied down.

Now with Jemma’s secrets out in the open, and both her and Caid’s lives on the line, can they find a way to work together? Or will Caid turn his back on the runner’s daughter?

You can add to your TBR here 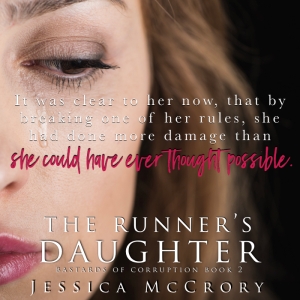 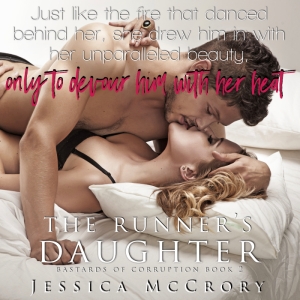 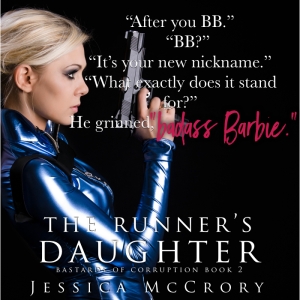 Check out the first book in the series. Although both books stand by themselves, it is recommended
you start with The Charitable Bastard. Available on Amazon and Kindle Unlimited!

The first book in the series is available now on Amazon and Kindle Unlimited!

Want to be notified when The Runner’s Daughter goes live?
Sign up here 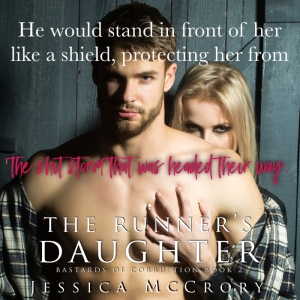 Jemma stared out the window as Caid drove away. She couldn’t help but feel the added stress with each second he was gone. She looked down at the phone he had given her. He said he wouldn’t be able to answer for about two hours because his other was in his desk, but that he would text her when he got to work.

Then if she needed to hear his voice, she could call. The man who was watching the house seemed nice. He waved at Jemma from the driveway, and Jemma waved back. Caid said the agent was a good one, and wouldn’t enter the house unless he thought necessary.

That gave her a small comfort. She stepped away from the window and walked over to the bookshelf that held a few leisure books. She lifted a Nora Roberts from the collection, and took a seat on the couch.

She hadn’t even been sitting on that couch long enough to finish the first chapter when gunshots rang out, and Jemma’s heart began to pound. She ran to the window and saw the agent who had waved at her not minutes before lying face down in the driveway, while three armed men came for her. 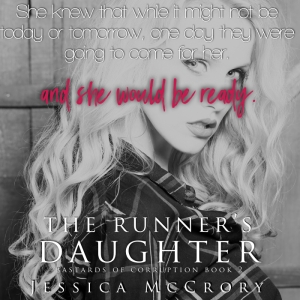 Want to be notified when The Runner’s Daughter goes live?  Sign up here