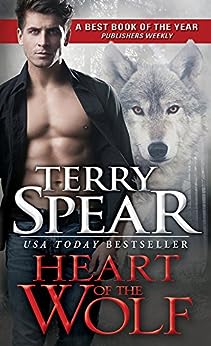 Bella, a female red werewolf, was adopted by a pack of gray wolves as a pup. Now grown up, the alpha of the pack tries to make her his mate against her will—Bella knows she has no choice but to run away.

She makes her way as a lone wolf until childhood friend, Devlyn, comes to bring her home. On their journey back, they get tangled in up in unimaginable danger and must apprehend a werewolf murderer while keeping their identity secret from humans. The chemistry between them sizzles like never before…but they both know if they mate, Devlyn will have to fight the pack’s wicked alpha…and it’s a fight to the death.

As a companion to Bella and Devlyn’s story, this edition includes an exclusive, brand new novella that brings the story of the lupus garou family full circle.

But Devlyn had to make sure. She could have been any one of a number of lone red lupus garou females all across the States. Or not. Because such a shortage existed, he sure as hell hoped Argos was right—that she was their stubborn Bella.

When Devlyn saw her in the pen at the zoo, he knew. He couldn’t be angry with her for having run away—but for her to risk proving to the world that lupus garous existed? That was irresponsible and unforgivable. At least that’s what he told himself, though his heart ached to hold her close again, only this time to claim her for his own.

Devlyn stalked toward the door of his hotel suite. “All right. Let’s break our little red wolf out of jail.” The notion that she was theirs, though, struck a chord. She wasn’t theirs. She belonged to Volan. Fire burned in Devlyn’s veins with the thought. Ever since Devlyn had rescued her near the river, the wildfire in hot pursuit of her, Volan had wanted her, too.

For years Devlyn had pinned her to the ground in their wolf states, avoiding her retaliatory bites, playing with her as young wolves frolicked. He still wanted to tackle her to the ground, to force her reaction, to have her pay attention to him. But the burning desire to have her for his mate drove away any notion of having another female.

He hurried his four younger male cousins out to the SUV with Argos at his side in the freezing drizzle. The black-haired, amber-eyed quadruplets, twenty-two years of age, all itched for a fight as they clenched their fists and steeled their square jaws.

Devlyn slammed his door. “If we wait much longer, she’ll have changed and be half frozen in this weather.” He’d rescue her again. He had to. Not for Volan, but for his own greedy desires. But what to do with her after­wards? He knew what he wanted to do with her. Make her his…forever…his mate for life.

But with Volan still living, how could Devlyn hope to take her for his own? That question had plagued him every minute of the day since he’d learned she still lived.

Backed into the confines of the wolf den, Bella spread her arms out, slowly, in her crouched position, to make herself appear larger. “Back off, Big Red.”

He continued to snarl. She took a step forward, and shivered, but it wasn’t the chill in the air that made her tremble. The notion that the zoo staff would catch her in the wolves’ den in human form forced concern to worm its way into every pore.

She took another step in his direction. Her eyes remained locked onto his. He didn’t back down.

Wrinkling her nose, she bared her not-very-scary human teeth. Anything to show him she wasn’t intimi­dated by his posturing.

After what seemed like an eternity of an old west­ern gunfight showdown, he turned, and trotted out of the den. She took a deep breath, then quickly followed him out. The icy drizzle coated her skin. Hoping to make her escape easily, she crossed the pen to the keeper’s door.

Her stomach muscles tightened with irritation. Heading for the water trough, she thought to use it as a step in the moat. But it was filled to the brim with water, and she couldn’t budge it. Her frustration level mounted, but her body temperature dropped rapidly with the chilly wet breeze swirling about her.

What she wouldn’t have given for her wolf’s thick undercoat—the dense second coat of fur virtually water­proof, a thermal insulator so effective even snow falling on her back wouldn’t melt.

She hurried to the edge of the moat and considered the height of the wall across from the pen. Big Red watched her from a corner of the pen, but never made a menacing move toward her. She’d probably confused the hell out of him. She smelled like a wolf in heat, the same one he wanted to mate, but she didn’t look like one in the least bit now. Poor fellow.

She sat on the edge of the concrete, the substance icy and rough on her bare bottom. After twisting around, she clung to the edge with frigid fingers, then dropped into the moat. It was about a six-and-a-half-foot drop and, with her five-four height, easy to make. But when she turned to consider the other side her heart filled with alarm.

Whether the wall rose eight feet or ten…didn’t matter. She didn’t see any way to climb the rough con­crete without foot or hand holds. She turned back to the other side. Her heart fell. She wouldn’t be able to climb out that way, either.

The cold had already affected her mind, slowing her ability to think. The shock at turning into her human form earlier than she’d planned had compelled her to panic.

Great. Just great. The next morning, the zookeepers would find a half-frozen, naked woman in the moat. She jumped at the shorter side, but couldn’t reach the top edge.

After several tries, she did what went against every instinct for survival—she gave up and yelled for help.

USA Today bestselling author Terry Spear has written over sixty paranormal and medieval Highland historical romances. In 2008, Heart of the Wolf was named a Publishers Weekly Best Book of the Year. A retired officer of the U.S. Army Reserves, Terry also creates award-winning teddy bears that have found homes all over the world and is raising two Havanese puppies. She lives in Spring, Texas.

Enter to win a copy of Between a Wolf and a Hard Place by Terry Spear!

You can’t always get what you want.
Shy and sweet Lia Gardella has only wished to make her father proud. Dropping plates, spilling drinks, and missing orders, she’s never fit in at the family business. And after nearly incinerating the whole building, she ran from the stressful environment.
Want not.
As head chef of one of the city’s best eateries, Finn Newland seems to have it all. He enjoyed a youthful career in the MMA. Women worship him. After years of hard work, he finally has an opportunity to take over the restaurant he’s always considered his own.
Be careful what you wish for.
When Lia’s father summons her to supervise Gardella’s, instead of handing the reins to Finn, no one is happy. They don’t know how to collaborate on running the restaurant. Nor are they confident they can continue to deny their attraction to one another. But before they can attempt a partnership of any kind, they’ll need to find the culprit behind a trend of spiteful sabotage aimed at Gardella’s.

Finn nodded. “See. She knows she can’t handle it.” He held his hand up in a truce. “Give me a chance, Rico. Take some time off and let’s see how I handle it. All right? There’s no need to be rash. I already run the cook’s line. I’ll step up and watch over the servers on the floor. I’ll contract a bookkeeper. I told you I’d work extra. I’ll handle it all.”
“You can’t handle yourself! You can’t stop whoring around enough to even think about this place no more!” Enrico flared up in his face.
Working his jaw, Finn eyed the little man. That damn critic. “Maybe I’ll just sleep with Lia and have her give it to me, huh, Rico?” He smirked. “What’s one more woman in my way?” It was a dirty hit, but Rico’s decision was ridiculous.
Enrico waved. “Ha! Not with her.” He grunted. “Won’t work.”
Finn crossed his arms, enjoying the blush on Lia’s cheeks. “I think it could.”
She slapped him.
Are you kidding me? His glared at her. Well, he deserved it, but hell, he was just joking. He’d never seriously—
“I’m not a, a pawn!”
“See?” Rico ceased his chuckle. “She doesn’t fawn over pretty boys like you.”
Finn rubbed his cheek and faced his boss. “Rico, she’s got no business being here. I do. I’ve worked for this, Rico. I’ve been here for years. She’s never even bothered to come back here. Not even once!”
Enrico hardly batted an eye. Actually, he smiled. “I never asked her to.”
“Why are you asking me now?” she said.
“Because I am.”

Amabel Daniels lives in Northwest Ohio with her patient husband, adventurous toddlers, smiley baby, and a collection of too many cats and dogs. Although she holds a Master’s degree in Ecology, her true love is finding a good book. When she isn’t spending time outdoors, or wondering how to negotiate with her mightily independent two-year-old daughter, she’s busy brewing up her next novel, usually as she lets her mind run off with the addictive words of “what if…”