Evander Lennox doesn’t do anything he doesn’t want to do. At least, that is, until he’s sent to prison. The four years he’s incarcerated, he’s had no choice but to do the things that he’s asked to do, when he’s asked to do them. And now, if he doesn’t, it will mean a one-way ticket straight back to hell.

Once he’s free, it takes him twenty-four hours to get his old job back, his dog at home where he belongs, and an understanding that people aren’t as forgiving as he once thought them to be. He’s just about given up hope of ever integrating back into society when a woman slams into his heart, literally and figuratively.

When she was younger, her parents divorced, and chose to separate her from her twin. Fast forward fifteen years, and she’s finally getting to meet the family she’s always wanted to be a part of. To make that happen, she uproots her life and moves to the tiny town of Hostel, Texas—giving her almost everything she’s ever wanted.

Just when she thinks she’s making progress in winning her family over, she finds out that her twin is ill, and the only reason her family tolerates her is due to the convenience of having a free caretaker whenever they might be in need of one.

After a few eye-opening experiences, she quickly realizes that she’s being used. Vowing to herself that she’ll make the best of the situation, she begins to steel her heart. What she doesn’t prepare for is a man named Evander who sees that barrier as a challenge.

It takes Evander all of ten seconds while watching the woman on the floor, bleeding from her jaw, to realize that maybe life isn’t as bad as it could be.

This woman with her thrill for life, a crazy obsession with chickens, and a desire to be wanted, changes everything he thinks he knows.

But it doesn’t take long for him to realize that just by being around her, the people of the town have judged her guilty by association.

Her business suffers, and soon after, she realizes what it will mean to have him by her side—the loss of everything she’s worked so hard for.

Kennedy knows that Evander is worth it. Evander, however, decides that he’s not letting another person get hurt because he was stupid enough to care.

Britt Red Hatter Book Blog – “As always, Hail No is an addictive book that will instantly suck you in and leave you unable to step away for even a second.”

MJ’s Book Blog and Reviews – “The first book of this new series was amazing, and had me going through all the feels.” 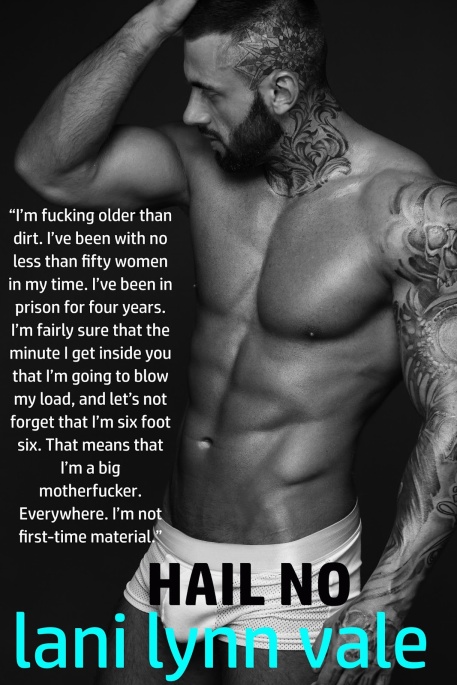 Another fanbloodytastic series from LLV!!! I have no idea what kinda spell Lani weaves when she writes but gods, I LOVED Hail No. Neither Evander nor Kennedy have had the easiest of lives but gods, together they are just fantastic!
I think I say this for just about every book by LLV but I did love this pair.As we’ve come to expect, Hail No was well really written, the story was interesting, had some intrigue, suspense, tons of heat and attraction and a little heart break. With cameo’s from some of our faves from other books/series, this was another book from Lani that I could barely put down!I cannot wait for more in the series and hope that we catch up with Van and Kennedy in the other books. 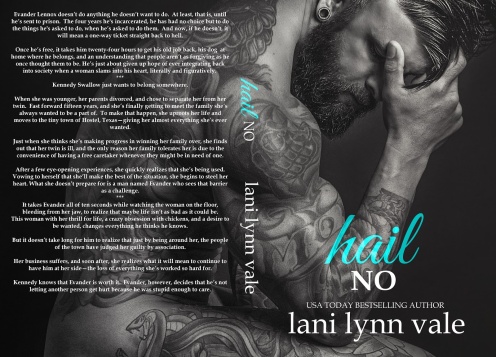