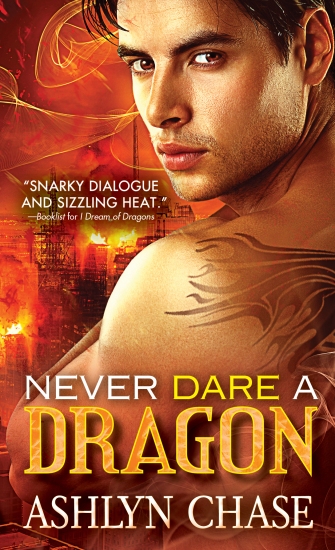 Third in Ashlyn Chase’s light paranormal romance series featuring hot dragon shifters. No one would believe that lovely Lt. Kristine Scott of the NY Fire Department is an actual dragon, but there’s no denying the flames that ignite when she meets firefighting phoenix shifter Jayce Fierro.

One Boston Phoenix + One New York Dragon = Scorching Heat
You think it’s tough being a dragon? It’s a piece of cake compared to being a phoenix shifter. Dragon shifters just have to worry about accidentally setting their stuff (or a loved one) on fire. A phoenix can rise from the ashes, but then they have to start over…as if growing up once wasn’t tough enough..

Meet Lt. Jayce Fierro of the Boston Fire Department, and Kristine Scott of the FDNY. A long distance relationship could never work—especially not with the secrets they’re keeping. But when Kristine lands herself in a blaze of trouble, she’s in no position to turn down Jayce’s help. Even if it means letting down their guards…and giving in to their sizzling attraction.

What People Are Saying About My Wild Irish Dragon:

The rest of the dinner went well. In fact, Kristine was surprised by how well it was going. She hadn’t dated a guy like Jayce in a long time. Their connection seemed to be almost instantaneous. It was just too bad he was a firefighter—and lived three hours away as the Acela train flies. Actually, a quick plane ride would reduce the commute to only an hour and a half, but the hassle and time it took to go through security would make the trip even longer.
Walking down the wide sidewalks of Times Square, hand in hand, sure made her feel as if the trip might be worth the hassle. His hand was warm and rough. For once she wasn’t concerned that hers were the same way. No hand cream could stand up to a firefighters’ routine. Wet gloves, rough weather, unbearable heat… All of that detracted from the soft, supple skin she longed for.
They had decided over dinner to visit the top of the Empire State Building. Jayce had never been there before, and Kristine had only visited with friends—never a date. It was supposed to be romantic. She’d never understood why. Probably because her cynical ex-boyfriend thought it was hokey. As she glanced over at Jayce, he glanced back, and they smiled. One thing she wasn’t seeing in him was a city dweller’s pessimism. Its absence was a refreshing change.
Eventually, they arrived at their destination, and as luck—or the stars aligning at the right moment—would have it, they stepped into an elevator with no one right behind them. The doors whooshed closed while they were still alone.
She spun toward Jayce with a hand over her mouth. “I guess that wasn’t very nice of me. I probably should have waited.”
He stepped right into her space. “I’m glad you didn’t.”
As the elevator began to ascend, he leaned in and captured her mouth with his firm lips. She looped her arms around his neck, and he pulled her close. She immediately opened her mouth, and their tongues found each other and swirled together. Kristine wasn’t at all sure her light-headed feeling was due to the elevator traveling so fast. Unfortunately, she felt as if she were falling instead.
Don’t think about it. Whatever happens happens… She seemed to have found a new mantra. She heard the ding of the elevator doors opening, and they were greeted by chuckles and a wolf whistle.
“Yeah, yeah…” Jayce said, but he was grinning and holding Kristine’s hand as they made their way off the elevator.
When they spotted a space at the building’s edge that was fairly deserted, they walked over to it with no hesitation.
“You’re not afraid of heights, I guess…” Jayce said to her.
She laughed. “I’d be in deep trouble if I were.” Not only was she a firefighter in a company that specialized in high-rises, but she was a full-fledged, fire-breathing, wing-soaring dragon. She could hover at this height and enjoy the view.
Speaking of enjoying the view…
Jayce turned his back on the dazzling city lights and kissed her knuckles as he stared into her eyes. She felt as if her insides were melting. A deep shimmer in his eyes must have been reflecting the lights. Or not. His eyes seemed to glow for a moment, and then he quickly turned back toward the city.
She took her first good look at the city lights as well. Dear Lord. At last she realized why people thought this place was romantic. At night, so many lights against the velvet black sky were more beautiful than Christmas. Some even seemed to twinkle like stars. Below, white headlights and red taillights trailed through the landscape, but the sounds of the city were far away.
A chilly breeze ruffled her hair. Jayce enveloped her in a side hug. If she felt a chill, it was forgotten in favor of his warm, strong body alongside hers. Everywhere they touched, merging heat radiated through her. Wow. How she’d missed this! Or had she ever had this feeling?
Good Lord, Kristine… Get ahold of yourself!
“So, Jayce… What do you think of the view from up here?”
He turned her toward him and said, “I think the view right in front of me is as beautiful as it gets.” Leaning in, he delivered another toe-curling kiss, and she realized she was a goner.

Ashlyn Chase has been a registered nurse for 20 years. During those years, she wrote articles for professional journals and a thesis, but eventually, thank goodness, discovered the joy and freedom of writing fiction.

Ashlyn considers herself lucky. Her degree in behavioral sciences is a combination of psychology and sociology, so she has worked with and studied people most of her life. She never has to write out exhaustive character sketches to understand her characters or predict how they will behave. That doesn’t mean they don’t surprise her. Sometimes they take her on grand unexpected journeys. For her, it gives “character driven novels” a whole new meaning.

Ashlyn has learned to go with the flow. To enjoy the journey is not only one of her writing goals, but also a challenge in life so she tries to follow where the story takes her. As such, she has lived in 17 different places over the years. At last, she’s all settled down and comfy in New England.

Is there a grand design or do we decide our own fates? Perhaps if the powers-that-be have a plot, then they also give us the right to revise it. Ashlyn has certainly made detours on her path, but she thinks she’s better for it. She’s having fun at any rate and hopes that if she enjoys the journey, so will those around her—including her readers.