You fell in love with Brady Luck, now meet his brother Bryce!

99 cents for a limited time (standalone)!

There’s one rule in reporting: don’t ever fall in love…

When Amelia Adams tells everyone my days as Chicago’s quarterback are over, I vow never to give her another minute of my time—until the team owner sees an empty stadium, and forces us together on a reality show in hopes of filling the seats.

When Bryce Luck becomes my assignment, I swear his brown eyes and dimpled smile won’t make my knees weak—that I’ll keep a professional boundary. But I can’t fight this attraction, especially when he whispers sweet nothings in my ear and promises to do a million dirty things to me when the cameras stop rolling.

When the show is over, and the game’s been played, will our love become a reality? Or are we just out of luck?

“Let’s open the first message with an attachment.” I let the cursor hover and take a deep breath. “Wait, are you sure seeing dic pics isn’t like offensive to you? I don’t want you to feel uncomfortable or anything.”

“I’ve been attached to one all my life,” Bryce says, shooting me a you’ve-got-to-be-kidding stare. “What about you? Feel awkward having a guy looking at dicks with you?”

I might sound confident, but I have no clue what kind of crazy will pop up. Clicking on the first message, a fully erect penis fills my screen—or, at least, the best it can. He’s a little on the small side, the poor guy. I wonder if he has no clue either. I’d never send this pic without some major photoshopping.

“Jesus!” Bryce exclaims, and I right click to save it before exiting. “What are you doing? Keeping them?” Bryce’s eyebrows shoot up to his hairline.

“I have a special place for all my boys.” I pull up a folder marked “Stroke Me.”

“Stroke me?” Bryce asks, his brows knitted together.

“Isn’t that what they want from me?” His eyes light up with understanding and he nods as a grin spreads over his face. “But my sub-folders are even better.”

“Now I have that “Stroke Me” song playing in my head,” Bryce laughs. “What did you name them?”

“I have five. Leans Left, Runs Right, Grower, Shower, and King-Kong. I bet you can guess what the last one means.” I waggle my brows, and he can’t stop laughing. Seriously, he had tears forming in his eyes.

“Compared to other pics, this guy seems a bit below average in size.” I move the pic to the sub-folder labeled “Grower”.

“I’ve never heard of anything so crazy!”

Hmm… I bet Bryce’s folder would be labeled, The Beast.

Hard Luck (Book One) is 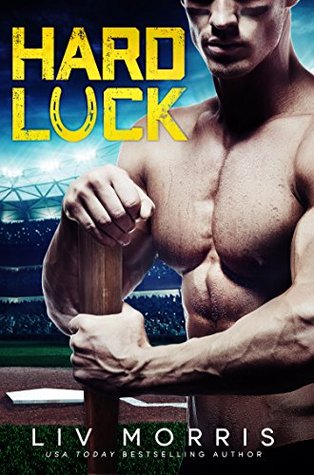 USA Today bestselling author, Liv Morris, was raised in the Ozark Mountains of Missouri. She now resides on the rock known as St. Croix, USVI with her first and hopefully last husband.
After relocating twelve times during his corporate career, she qualifies as a professional mover. Learning to bloom where she’s planted, Liv brings her moving and life experience to her writing.