A career-driven mom. Houston’s most eligible heartthrob. The irresistible attraction could destroy both their careers.

Rick Morehouse doesn’t date single moms. As the former quarterback for the Houston Texans, he’s Houston’s most eligible bachelor. But after the heartache of abandonment by his own mother’s string of boyfriends, he never wants to hurt anyone’s kids that way. When he meets Brandy Love, the drop-dead gorgeous owner of Phenomenal Physiques, he’s totally taken by the confident career woman. It’s too bad she has kids.

Brandy Love doesn’t have room in her life for a relationship. Opening a chain of gyms and parenting her kids already takes more time than she has. But when Coach Charming drops in on her gym, she’s sorely tempted.

When vengeful columnist roasts Rick to bring down his team at the playoffs, Brandy must decide if he’s worth fighting for. But even if she can save him, will he accept her and her kids in his life?

Interesting Fact: The heroine and some of the material for this book was based on co-author Theresa Roemer’s life. Theresa owned a chain of fitness clubs called Body by Design and personal training services called Phenomenal Physiques, took the U.S. Open title in bodybuilding at the age of 40, and held the titles of Mrs. Houston U.A., Mrs. Texas U.A., and was the 1st runner up for Mrs. United America concurrently.

What Others Are Saying

He caught her wrist as she moved out of his personal space. He had fast reflexes for a guy who had just been struggling to keep his hands interlaced behind his back. “Don’t stop,” he murmured, flashing that megawatt smile again.
She forced a chuckle. “Hey, I charge a lot for private lessons. That’s all you get for a freebie.”
He threw his head back and laughed, a deep rumbling sound that warmed her from the top of her head to the tips of her toes. “Well, how can I go about scheduling one of those privates?”
She looked away, stepping toward the door and forcing him to drop her wrist. “Ah, you know, check with the front desk,” she said vaguely with a laugh.
“Actually, I was hoping for your number.”
“I’m sure you were,” she said over her shoulder.
“Really? You’re just blowing me off, huh?”
She stopped and pivoted. He sounded dead sincere now, which surprised her. “Wow, yeah. About that…I’m, uh, not exactly dating right now.”
Even if I were, I’d stay way the hell away from a player like you.
Her smile wobbled. This shouldn’t be so hard.
He shoved his hands in the pockets of his gym shorts, which few men could pull off and still look manly. He nailed it. She realized with a stab of guilt he was trying to hide the bulge of his erection. “Sure, I get it. No problem.”
Had she actually hurt his feelings? Impossible. He was a player.
She hadn’t meant to be a tease. She ought to be spanked.

By him. Just before he took her hard from behind… 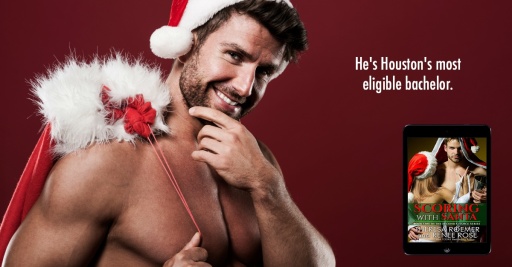 Theresa Roemer is an author, media personality, entrepreneur and small business owner based in Houston, Texas.

Theresa’s passion for health started at a young age. As a child Theresa was diagnosed with rheumatic fever many times over, which caused her to have a heart murmur; she was sickly and her doctors diagnosed her with a lifetime of physical constraints. Determined to prove the doctors wrong, Theresa began her lifelong journey to stay active, healthy, and physically fit. Theresa took the U.S. Open title in bodybuilding at the age of 40, and held the titles of Mrs. Houston U.A., Mrs. Texas U.A., and was the 1st runner up for Mrs. United America concurrently.

Theresa’s passion for health inspired her to write Naked in 30 Days to empower women to feel as vibrant and healthy at 45 and beyond as they did at 25. This is her first work of fiction.

Renee loves to connect with readers! Please visit her on: