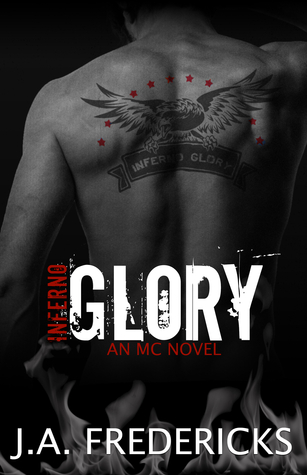 The day Harley Sonnick is released from a three year prison sentence for a crime she didn’t willingly commit, she returns to the only family she has left—the Inferno Glory MC. But the club’s president isn’t ready to forgive her for past sins and turns her away, forcing her to trust in a new club member who’s arguably the sexiest man she’s ever laid eyes on.

Colt Sawyer, a young military veteran like the other MC members, is elusive and doesn’t have much to do with the women throwing themselves at him until Harley comes riding into his life on her own motorcycle. Together with his best friend and fellow MC member Ranger, Colt will do everything in his power to remind Harley what it’s like to be pleasured by a man and make her feel at home despite the reluctance of the MC.

Things take an unexpected turn when Harley’s worldly possessions are ripped away, forcing her to rethink her future. But she isn’t a pathetic princess in need of saving and is reluctant to accept help. Prison made her hard, forcing her to guard her feelings at all costs. So when dark, blue eyed Colt does inexplicable things to both her body and heart, she’s forced down a dark path of passion and desire that threatens all the safeguards she’s set in place.

Add to your TBR on Goodreads:

*Intended for readers over 17.
Content was previously offered as a 5-part series and has been combined into one full-length novel.*

They say you can never go home again, but I was out to prove them wrong. After a three year absence from the only home I have ever known, the Inferno Glory MC was not welcoming me back with open arms.

Until Colt Sawyer sweeps me off my bike, makes me feel like a woman again, and shows me pleasures I have never dreamed of.

Colt thinks he can save me, but I am not the MC darling everyone remembers me as, and no amount of scorching hot sex or whispering sweet nothings in my ear will change my hardened exterior.

Or at least that is what I thought.

He’s offering me passion, forgiveness and protection. And once secrets start being revealed, the protection he provides me may be the only reason I survive the Inferno Glory MC.

Warning: This story involves steamy sex with multiple partners and tattooed alpha bikers. If you’re looking for a hot and dirty ride, this is your book.

A. Fredericks is the contemporary and paranormal steamy romance author of the the Fifty Kinds of Dead series, Inferno Glory MC series and its spinoff Jawa’s Angels MC. Just like her characters, she’s really into music, tattoos, and motorcycles. Rather than riding bitch forever on her husband’s Harley, however, she hopes to one day get her license and at least pretend to be as badass as the heroines she writes about. She lives in rural Minnesota with her husband and kids.