← RELEASE BLITZ – Getting Off Easy (Boys of the Big Easy #4) by Erin Nicholas
RELEASE BLITZ : Mountain Desire by Vanessa Vale → 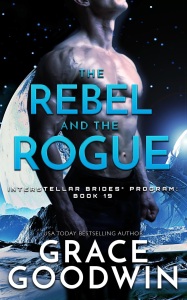 Title: The Rebel and the Rogue
Series: Interstellar Brides #19
Author: Grace Goodwin
Genre: Sci-Fi Romance
Release Date: January 14, 2020
Blurb
Zenos, from the Astra Legion of Rogue 5, is on a mission to find an antidote to the deadly venom flowing through his body.  Without the antidote, one bite during mating will kill a
Forsian’s chosen female. Zenos must acquire the serum at any cost, for like his Atlan cousins, his mating instinct will eventually consume him.
The last thing he needs is a distraction, but one look at the defiant female bounty hunter and he can’t deny his body what she’s offering—a few wild hours of pleasure.Ivy Birkeland’s entire ReCon unit was annihilated as a result of Quell, a mind-altering drug the pirates of Rogue 5 are known to distribute. A rebel to her core, her heart still broke when she was forced to walk away from her life as a Coalition fighter. Now she hunts a bounty that will allow her to
catch the criminals selling Quell and avenge her dead friends. Free of the Coalition Fleet’s strict regulations, she makes a deal with an unknown Rogue 5 operative to gain access to his home planet and travels to Transport Station Zenith to meet him.

When Ivy’s smoking hot, one-night-stand turns out to be her Rogue 5 contact, every carefully-laid plan she’s made goes to hell. Because when a rebel and a rogue are forced to work together, sparks will fly. They don’t need the criminals to kill them, they just might finish each other…if they don’t fall in love first. 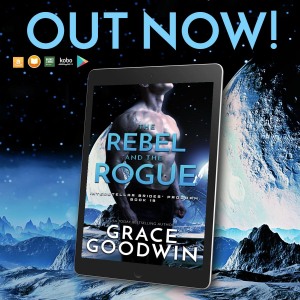 Purchase Links
AMAZON US / UK / CA / AU
B&N / KOBO / APPLE BOOKS
GOOGLE PLAY
Author Bio
Grace Goodwin is a USA Today and international bestselling author of Sci-Fi and Paranormal romance with nearly one million
books sold. Grace’s titles are available worldwide in multiple languages in ebook, print and audio formats. Two best friends, one left-brained, the other right-brained, make up the award-winning writing duo that is Grace Goodwin. They are both mothers, escape room enthusiasts, avid readers and intrepid
defenders of their preferred beverages. (There may or may not be an ongoing tea vs. coffee war occurring during their daily communications.) Grace loves to hear from readers.
Author Links
WEBSITE
FACEBOOK
TWITTER
FREE BOOK
INSTERSTELLAR BRIDES SERIES

← RELEASE BLITZ – Getting Off Easy (Boys of the Big Easy #4) by Erin Nicholas
RELEASE BLITZ : Mountain Desire by Vanessa Vale →