They say opposites attract and that couldn’t be truer when it comes to CeCe and Shep. But what happens when the two most anti-marriage people in the French Quarter start enjoying the act?
Release Date: October 10p

CeCe
I never planned on getting married. After my dad deserted my family the day before my tenth birthday, and I watched my mother fall to pieces over him, I decided it wasn’t worth the heartache. Then Shepard Rhys-Jones, who ghosted me two years ago, declares he needs to marry someone to claim his inheritance, and I drunkenly offer myself up as his wife.
He was the best I’ve ever had and now, he’s all mine… but only for the next year.

Shep
I never planned on getting married. It was one business transaction I had no desire to close. Yet, here I am… sitting in a bar in New Orleans… seriously considering making CeCe Calhoun my wife.
If we can manage to stay married for a year, I’ll be one hundred million dollars richer and finally have the freedom to forge my own path, separate from the Rhys-Jones name.
She’s the only woman I’ve struggled to forget, and she’s finally mine.
For now.
Is it possible for this fake marriage to be real? 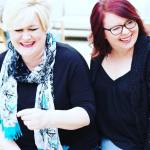 Meet the Authors:
Jiffy Kate is the joint pen name for Jiff Simpson and Jenny Kate Altman. They’re co-writing besties who share a brain. They also share a love of cute boys, stiff drinks, and fun times.
Together, they’ve written over twenty stories. Their first published book, Finding Focus, was released in November 2015. Since then, they’ve continued to write what they know–southern settings full of swoony heroes and strong heroines.
You can find them on most social media outlets at @jiffykate, @jiffykatewrites, or @jiffsimpson and @jennykate77.
Sign up for their newsletter –> http://eepurl.com/c_JFaX
Join their reader group –> http://bit.ly/2nKCGsI