Blurb
She’s looking for trouble. Well, here I am. Royal brat, meet royal hand of discipline. And I’m going to teach that royal heiny a lesson she’ll never forget…
It takes a strong hand to be King. It takes discipline, and control. I may be rough around the edges, but as King, my rules will be followed, not challenged.
…That all goes to hell when she barges into my world. Duchess Riley Noles – blonde, blued-eye, and five-foot-four of pure f*cking trouble.
She’s wild, out of control and all sorts of challenging – a pretty little hurricane crashing right into me. And when I
catch her red-handed screwing with my car, oh, there’s going to be hell to pay.
But then, this tempting little firecracker may have just found exactly the trouble she’s been looking for. And when her
soft moans tease through my ears, and her sweet curves press against my hard body, the last of my meticulous control might just be broken.
She’s all sass and vinegar, but as King, I always get what I want. And with her, I’ll have it all – her body, her heart, and her sweet submission, over my knee and saying “yes please”.
You know what they say about pretty little rich girls who look for trouble: they always find it.
And Duchess Riley is about to find it with me. …every inch of it.
Hear ye, hear ye! A Queen-sized helping of insta-love, kindle-melting steam, and a filthy-talking alpha, all for you. Hang on to your crown, and buckle up – this is going to get ridiculous real fast.
Ludicrously over the top, out of control, and pure dirty royal fantasy. As with all my books, this one is safe, with no cheating, and a HEA guaranteed.
ADD TO GOODREADS 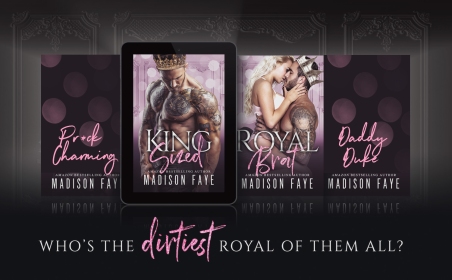 #1 bestselling contemporary romance author Madison Faye is the dirty alter ego of the very wholesome, very normal suburban housewife behind the stories. While she might be a wife, mom, and PTA organizer on the outside, there’s nothing but hot, steamy, and raunchy fantasies brewing right beneath the surface!

Tired of keeping them hidden inside or only having them come out in the bedroom, they’re all here in the form of some wickedly hot stories. Single-minded alpha hero, sinfully taboo relationships, and wildly over-the-top scenarios. If you love it extra dirty, extra hot, and extra naughty, this is the place for you! (Just don’t tell the other PTA members you saw her here…)

We are excited to celebrate the release of LENNON REBORN, the final instalment in Scarlett Cole’s Preload series! Join us for reviews and excerpts plus enter to win a complete series set of signed paperbacks!

Lennon McCartney is not a broken man. Because being broken implies being whole once. When a horrific accident deprives him of the one thing he loves—his talent as a fierce and explosive drummer—Lennon is left with a life chained by an abusive mother, by crushing guilt over a tragic past. A life he doesn’t want.

Dr. Georgia Starr is a legend. She’s one of the most successful neurosurgeons in the world, coming from a long-line of respected New York doctors. Her life is built around solving complex medical cases in order to bring relief and hope to sick children. But the one problem she can’t solve is how to live her life. How to shake loose the burden of being her elitist, arrogant father’s daughter. How to be free.

Can a man who despises his life and a woman who desperately needs to live find the answers, and love, with each other? 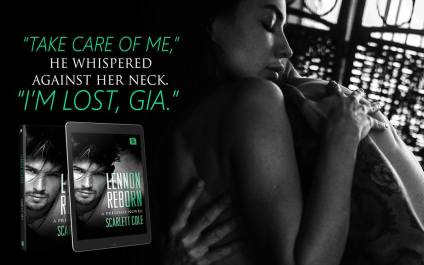 “Will you tell me about the band? Dred said you were brothers? You told me about Adam. But Dred, Elliott, the others.”

Lennon swallowed hard. He should have expected the question at some point. “Nik’s the oldest. He’s the glue that kept us together as a family. Our social worker, Maisey, always said that seeing as biological families don’t get to choose their families yet somehow make it work, so should we. And Nik’s past . . . well, I guess he took it to heart and became the patriarch. Dred is the brains of the band, and the one most passionate about our music and careers.” Lennon swallowed hard, hoping to avoid a hint of emotion in his words. “Elliott is the mom of the group. Maisey says he has a way with broken kids. Guess Jordan and I would agree with that. Jordan is the soul.”

“So what are you?” she asked, letting go of his hand and rolling close so she was on her side, her head on his shoulder.

“The annoying little brother,” he said. Georgia smacked him playfully across the stomach. He automatically went for her hand to hold it against him but couldn’t reach. Fuck.

“I don’t believe it for a second,” she said as she gripped his chin and turned him to face her. “They’re expressing too much love and concern for someone who is simply an annoying little brother. You did let them know you are okay, right?”

“Why?” Georgia asked, moving to her knees in front of him.

He couldn’t help but look up at her.

“You are lucky that people worry about you, Lennon. They love you, like genuinely, with their whole hearts. If anything happened to me, my father would care only about the implications for his neurosurgery legacy and who I would leave this place to in my will.”

The words bounced around in his brain. He wanted to ignore them, wanted to let them fall into the cracks between the two of them, but he couldn’t. Because they came from her, he felt compelled to hear them. And because he was listening, like actually paying attention to every word that fell from those pretty lips of hers, he heard the hurt. Heard the loss behind the boldly spoken statement.

“I’m going to hire a physical therapist to start coming to the condo every day and a personal trainer to kick my ass into gear,” he said suddenly. Perhaps if he jump-started his own life, she’d copy him and jump-start her own. “But I’m only going to do it if you agree to make some changes in yours.”

“Lennon,” she said, those pretty eyes studying his intently, “you have to do this for yourself, not because of me.”

“I know,” he replied. “But what’s wrong with a little motivation between friends? You need to stop more often, let more into your life than being a superstar neurosurgeon. I know you thrive on it, I know you love it. Happiness can come from so many different places, I think we both need to learn that. And I don’t want you to do it for me. Don’t you want it for yourself?”

Georgia sighed. “I do,” she whispered, the weight of those two simple words hitting him squarely in the chest. Because in another life, in another time, he could imagine her saying them to him in a completely different setting.

KNOTTED, Book #1 in the TRAILS OF SIN series

Genre: Dark Cowboy Romance
Series: HEAs with no cliffhangers. Each book is a different couple. Must be read in order. 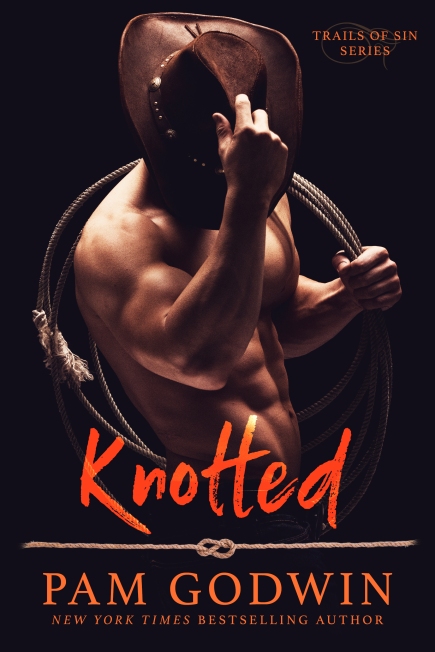 I try to forget her.
It’s impossible.

We were sixteen the night she was violently assaulted while I helplessly watched.
I’ll never forget the sounds of her suffering.
Or my inconsolable agony when she left Oklahoma.

Years later, she returns to honor our teenage pact.
Except the boy she loved is gone, replaced by a ruthless cattle rancher knotted with secrets.
She doesn’t know my dark cravings or the trails of sin that lead to her.

I don’t deserve her, but one truth remains.
She’s mine.

New York Times and USA Today Bestselling author, Pam Godwin, lives in the Midwest with her husband, their two children, and a foulmouthed parrot. When she ran away, she traveled fourteen countries across five continents, attended three universities, and married the vocalist of her favorite rock band.
Java, tobacco, and dark romance novels are her favorite indulgences, and might be considered more unhealthy than her aversion to sleeping, eating meat, and dolls with blinking eyes.
Website | Facebook | Twitter | Amazon page | Goodreads | Instagram | Bookbub
Join my Facebook Reader Group: here