HEAT, an all-new dragon romance from Donna Grant is LIVE! 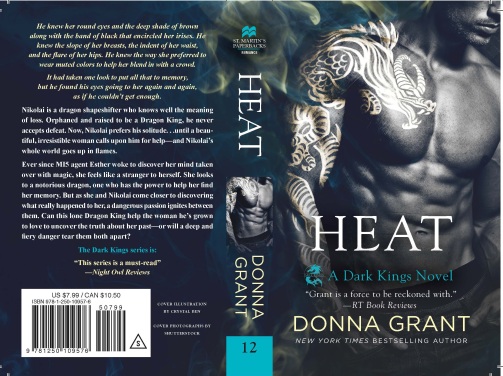 He knew her round eyes and the deep shade of brown along with the band of black that encircled her irises. He knew the slope of her breasts, the indent of her waist, and the flare of her hips. He knew the way she preferred to wear muted colors to help her blend in with a crowd. It had taken one look to put all that to memory, but he found his eyes going to her again and again, as if he couldn’t get enough.

Nikolai is a dragon shapeshifter who knows well the meaning of loss. Orphaned and raised to be a Dragon King, he never accepts defeat. Now, Nikolai prefers his solitude. . .until a beautiful, irresistible woman calls upon him for help—and Nikolai’s whole world goes up in flames.

Ever since MI5 agent Esther woke to discover her mind taken over with magic, she feels like a stranger to herself. She looks to a notorious dragon, one who has the power to help her find her memory. But as she and Nikolai come closer to discovering what really happened to her, a dangerous passion ignites between them. Can this lone Dragon King help the woman he’s grown to love to uncover the truth about her past—or will a deep and fiery danger tear them both apart in Heat, the next Dark Kings novel by New York Times bestselling author Donna Grant.

The British beauty was still in the doorway, her hand upon the knob as her gaze locked on the various drawings that were scattered about his room, hung on lines he had strung, or sitting on easels.

Her lustrous brunette tresses hung free about her shoulders. She wore an oversized gray sweater that hid her curves and dropped past her hips over a pair of black leggings. Fuzzy white socks that had a kitten face atop them, complete with a pink nose and whiskers, encased her feet.

The longer she stood there staring, the more he was able to gaze at her striking features at his leisure. The MI5 agent had captivated him from the very beginning when a Druid got into Esther’s mind to control her with magic.

The Dragon Kings managed to undo the Druid’s work, but there were side effects.

The memories of the time Esther spent with the Druid were missing. It made Esther a liability, but she was allowed to remain because of one very important factor—she was Henry North’s sister.

Henry, also MI5, worked with the Dragon Kings to track the activities of the Dark Fae in an attempt to figure out their next move. It was uncommon for the Kings to trust humans, but Henry was an exception.

And so was his sister.

Nikolai knew Esther’s face. His power allowed him to conjure every detail about her from just one look. From the small, nearly hidden scar on her left wrist from some childhood accident, to the confident way she held herself.

He knew her hair wasn’t just brown. It had strands of the softest shade of walnut, darker tones that deepened into chocolate, and lighter streaks of amber. He knew the curve of her face, and how she lifted her chin when she was angry. He knew the lines in her brow from the expressive way she spoke. He knew her mouth and how her bottom lip was slightly fuller than the top.

He knew her round eyes and the deep shade of brown along with the band of black that encircled her irises. He knew the slope of her breasts, the indent of her waist, and the flare of her hips. He knew the way she preferred to wear muted colors to help her blend in with a crowd.

It had taken but one look to put all that to memory, but he found his gaze going to her again and again as if he couldn’t get enough.

That fact was only one reason he kept drawing Esther. The other was that he had no choice.

She filled his mind like no other had before.

Despite deadlines and voracious reading, Donna still manages to keep up with her two children, four cats, and one long haired Chihuahua.