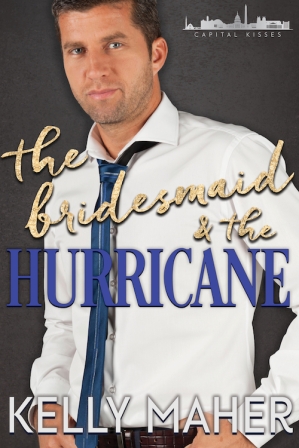 A one-weekend stand over a year ago, and now they’re coworkers…

Being a woman in TV is hard enough, but when the boss is trying to derail Radhika O’Leary’s career from behind the scenes, she has to make sure every aspect of her work—and her life—stands up to scrutiny.

Of course, the double standard is alive and well and Malcolm Jones, the broadcast meteorologist known as “Colm” to his friends and “The Hurricane Hottie” to his fangirls, knows that fame can hurt just as much as it helps. When Colm moves to DC, he’s excited to work with Radhika—her professional reputation is sparkling, and so are the kisses they shared that one weekend over a year ago when he was in town covering a blizzard.

But when Radhika is paired up with Colm for a project, all she sees is a looming storm over her carefully constructed career. Sparks still fly between the two journalists, and if they’re not careful, lightning might strike and alter the course of their lives forever. 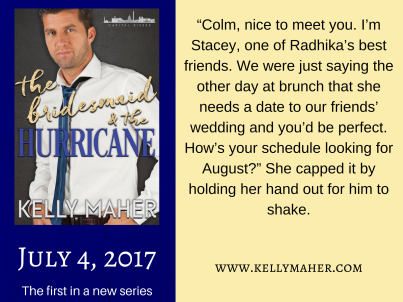 The elevator doors opened to reveal none other than the Hurricane Hottie himself standing inside. She was sure the laughter she heard echoing in her head belonged to some goddess of fate.

He was doing something on his phone, so he didn’t immediately spot her. She had time to study how his golden hair seemed to have lightened a shade or two. His skin had warmed in tone from the fair paleness of her memories, so she assumed the cause of both was the southern sun from his last posting. Not that she’d been tracking his moves since the previous January. At least, not obsessively. The doors started to close again and she scooted in. She kept her head down, in the hopes he wouldn’t see her, and wished she’d taken her hair out of its ponytail so it could screen her face from view.

She was reaching for the buttons in front of him when his deep voice slid over her, reminding her of silken sheets. Well, they’d been hotel cotton, but to her body, with him, they’d felt like the finest silk. “What floor?”

His head snapped up and he stared at her. “Radhika?”

His lips spread into a smile and then a full-on grin. He hit the emergency stop button and lifted his arms, but stopped with inches to spare. “Uh, can I hug you?”

Surprised that he not only remembered her face and her name after nearly eighteen months, but that he wanted to touch her again, her body screamed yes, but her brain tried to bat the impulse down. She
started to respond, but her throat closed. She cleared it. “Sure. Sure.”

His arms were just as strong and his back as tough with muscle as she remembered and heat filled her body. He didn’t do anything but hug her. Kind of like when Rory hugged her. Oh, God. A former lover was hugging her just as her brother did. Could this get any more embarrassing?

“Hey, Radhika? You need help in there?”

Yep. There it was.

When Colm stepped back with his hands up, looking around for the camera, she reached over and pressed the intercom button. “Hey, Denise. I’m good. We’ll get moving again in a sec.”

Colm had finally spotted the camera and waved at it. “Sorry for the inconvenience, Denise.”

A sniff was clearly heard before the connection cut out. Radhika pressed the emergency stop button to get the car moving again. “You do not want to get on Denise’s bad side.”

He nodded. “I got that impression when I signed in this morning. Are you coming to the shindig?”

“Uh, no. I’ve got some things to do and need to get lunch now before I get nothing.”

Was it her imagination, or did his shoulders slump the tiniest bit? “Okay. I’m sorry you won’t be there. Would you like to go out for drinks later?”

She froze, not believing what she was hearing. Drinks? Her eyes narrowed and she studied him. He appeared relaxed with his hands in his pockets, and his arms loose. Temptation nibbled at her, but working for Bella was bad enough already. She needed to avoid any appearance of salacious fraternizing. Her boss had been gleeful when she’d had one of Radhika’s former coworkers written up for violating company policy. “Sorry. I’m meeting a friend for dinner.”

Yep. His shoulders had definitely tensed. The tiniest bit, but she’d spent enough time with that body. Even if it had been over a year ago. “No. A girlfriend.”

“Not that kind of girlfriend, either.”

Another smile bloomed on his lips. “So, you’re single?” 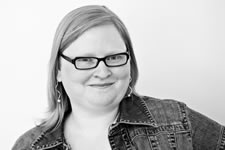 Foiled in her attempts to pursue a career in Forensic Anthropology due to a fatal incomprehension of calculus, Kelly turned to a life of telling people where to go, AKA librarianship. She then took another page out of her idol Indiana Jones’ playbook and renamed herself after the dog, writing tales of romance of varying heat levels and erotica. She currently splits her time working on new writing projects and at the day job in a federal library in Washington, DC.