Will they be able to survive her insecurities and the scrutiny of their friends and family? 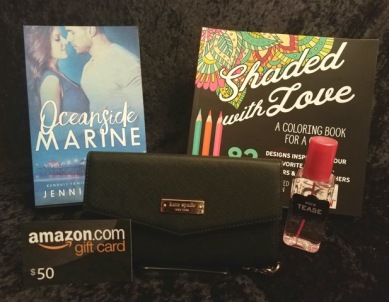 Follow the reveal and enter to #win an Oceanside Marine prize pack including a paperback copy of the book,
$50 Amazon GC, adult coloring book, and Kate Spade clutch 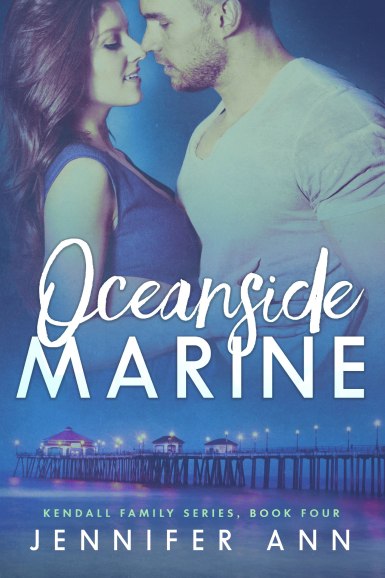 Fresh out of the Marine Corps, Braden Kendall has settled into a comfortable routine in SoCal with his 3-legged dog and a handful of good friends. Despite being undeniably handsome and perceived as a lady’s man, he’s lonely and tired of meaningless hookups. After becoming pregnant in her teens, Katie Walker dedicated her life to raising her two sons, putting any romantic notions aside until they flew the nest. Now that she’s on her own and free to date, she struggles with putting her needs first.

Though Katie and Braden aren’t related by blood, their families are intertwined by marriage, making a relationship seem forbidden. Katie always found the cocky Marine attractive, but their considerable age difference made him off limits. Little does she know, Braden has been crushing on her for years and can’t get enough of her quirky personality. When they meet up in Vegas for a family celebration, Braden offers to show her a good time unmatched by anything she’s experienced. Once Katie decides she wants more of what he’s offering, can she survive a judgmental society, her insecurities, and the scrutiny of those closest to her?

Find out more at: Goodreads | Amazon

As I head for the elevators, I spot a group of older yuppies in suit jackets surrounding a woman like a pack of fucking vultures just waiting to sink their beaks into her creamy skin. Then the woman turns, and I realize it’s her.

Excitement flickers in my gut. When I first met my brother-in-law’s older sister, I was amused by her spitfire personality long before I admitted to myself that I found her maddeningly attractive. Despite being a tiny little thing, probably not weighing much more than a hundred pounds, she’s bold as hell and refuses to take anyone’s shit. After I learned she was in her early thirties with two teenage sons, I was blown the fuck away. I’d figured she was five years older than me, tops.

Though I was only twenty at the time, I never gave two shits about the age difference, probably because she’s too young to be my mom. Plus she doesn’t act like any other moms I’ve ever been around. Over the years I started crushing on her. Hard. She’s a fucking riot, and I get a major charge out of messing with her until she’s flustered. There’s nothing better than hearing her spew fragmented sentences back at me and seeing her beautiful face turn a bright shade of pink.

With every family event that brought us together, I’d find something new to like—especially the way she can fill out a bikini, giving a whole new definition to the term “MILF.” Last summer when I stopped by their place in the Hamptons, I found her lounging by the pool and got my first Katie-induced hard-on. Those womanly curves of hers…plump ass, full tits…they’re not something I’ve found on any of the twenty-something girls I’ve hooked up with. And it was the first time I had seen her blonde hair dyed chestnut brown. The way it highlights the sharpness of her cheekbones and the sparkle in her eye drives me fucking insane.

If it weren’t for the fact that she’s family in a complicated sort of way—though thankfully not by blood—I would’ve fucked her six ways from Sunday. Instead I spent that night in the Hamptons beating off to the imagery of her sprawled out naked on her bed in the next room.

A primal urge to protect her rattles me to the core as I stalk over to where the men have her cornered.

Jennifer Ann is the author of nine contemporary romance novels with complex love stories. Like her characters, she’s in love with the city of New York, trips on airplanes or the back of her husband’s Harley, and everything rock and roll. Sometimes you can catch her driving a tractor alongside her husband in southern Minnesota while trying to keep up with the madness of their four active children.