Synopsis
To Chuito the apartment was a self-imposed prison for a lifetime of sins. To Alaine, the girl next door, it was salvation from her overbearing, religious father.
He was a devil.
She was an angel.
Two people who should’ve never met, let alone become friends, but it’s not until they give into the dangerous passion that’s been simmering under the surface for five years that things go to hell.
On the outside, Chuito ‘The Slayer’ Garcia is on top of the world.  He’s successful. He’s wealthy. He’s a champion MMA fighter surrounded by friends who support him, but they don’t know what he was before he came to Garnet.
A gangster.
A thief.
An addict.
A murderer.
Now his past is churning up demons he can’t ignore. Chuito knows he needs to go back to Miami to end it, but there’s something holding him back, a single temptation he can’t resist before leaving.
Alaine.
She’s the one drug he can’t give up…even if it destroys them both.
“To me you’re coke. Fine. Smooth. Perfectly white. Very bad for me, but so fucking sexy I don’t give a shit. It’s worth going down for.” – Chuito Garcia

Marcos Rivera is a fighter. A gang member. Someone who has seen the dark side of humankind and survived. He has lost family and gained enemies. He has stolen cars and destroyed hearts, stripping one for money and the other for pleasure. His past is haunted and his future is bleak.

Katie Foster is a high school history teacher. Smart, strong, and sexy. She is a woman Marcos shouldn’t want. Shouldn’t touch. Shouldn’t love. He met her in Garnet, a backwards, hick town that’s the last place in the world he wants to be, but he finds himself going back, all for a taste of the forbidden.

Katie represents all that is good in the world, and Marcos knows he’s nothing but trouble for her perfect life. He fights and he screws. He commits crimes and he breaks the rules. He will never change and he will never escape his gang lifestyle.

What happens when two different people from two very different walks of life risk it all by giving into the passion that threatens to consume both of them? Can a woman who only knows how to play it safe give her heart to a man who lives hard and loves harder?

Can she survive The Viper? 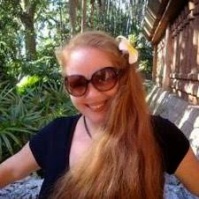 A freckle faced, redhead born and raised in Hawaii, Kele Moon has always been a bit of a sore thumb and has come to enjoy the novelty of it. She thrives off pushing the envelope and finding ways to make the impossible work in her story telling. With a mad passion for romance, she adores the art of falling in love. The only rules she believes in is that, in love there are no rules and true love knows no bounds.
So obsessed is she with the beauty of romance and the novelty of creating it she’s lost in her own wonder world most of the time. Thankfully she married her own dark, handsome, brooding hero who had infinite patience for her airy ways and attempts to keep her grounded. When she leaves her keys in the refrigerator or her cell phone in the oven he’s usually there to save her from herself. The two of them now reside in Florida with their three beautiful children who make their lives both fun and challenging in equal parts–They wouldn’t have it any other way.
Website | Facebook | Twitter | Goodreads

Throb by Vi Keeland is LIVE!
Now is your chance to meet Cooper & Kate! 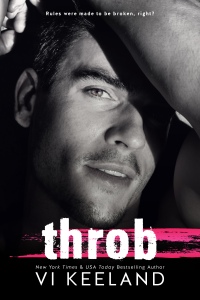 The rules:
No dating.
No sex outside of the game.
No disclosing the terms of the contract.
Rules were made to be broken, right?

Eight weeks ago I signed a contract. One that seemed like a good idea at the time. A handsome bachelor, luxury accommodations, and a chance to win a prize my family desperately needed. There were some rules though. Lots of them actually. Follow the script, no dating, sex, or disclosing the terms of the deal. After my self-imposed moratorium on men the last year, it wouldn’t be hard to live up to my end of the bargain…so I thought. Until I realized the deal I’d made was with the devil…and I was in love with his dirty-talking brother. 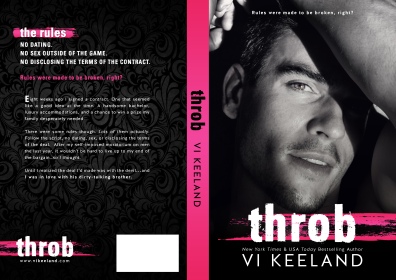 Vi Keeland is a native New Yorker with three children that occupy most of her free time, which she complains about often, but wouldn’t change for the world. She is a bookworm and has been known to read her kindle at stop lights, while styling her hair, cleaning, walking, during sporting events, and frequently while pretending to work. She is a boring attorney by day, and an exciting smut author by night! 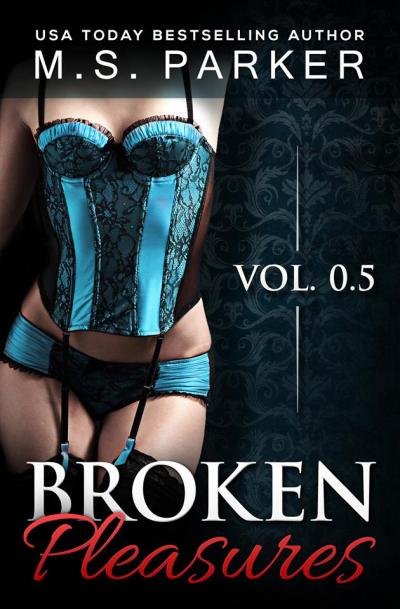 Every night, when I go to sleep, I wonder if I’m going to see them, hear them, feel them. For thirteen years, my life was hell and now I’m just trying to keep all the broken pieces together so I can have a somewhat normal life. Then I had to meet him and everything changed.

Twenty-two year-old Jenna Lang is one of the best computer techs in Colorado, if not the country. Known for her eccentric appearance as much as for her intelligence, she keeps all of her secrets closely guarded, never letting anyone close. And no one has ever really tried. Not until twenty-eight year-old billionaire Rylan Archer decides to test the walls Jenna’s put up, forcing her to wonder if maybe it’s time to let someone in.

Living in Southern California, she enjoys sitting by the pool with her laptop writing on her next spicy romance.

Growing up all she wanted to be was a dancer, actor or author. So far only the latter has come true but M. S. Parker hasn’t retired her dancing shoes just yet. She is still waiting for the call for her to appear on Dancing With The Stars.

When M. S. isn’t writing, she can usually be found reading- oops, scratch that! She is always writing.

Lara Bailey isn’t in Rocky Springs for the hot springs, the resort activities or the fabulous skiing.  She has come to Colorado for one reason and one reason only: to find and get close to Marcus Colter, the eldest Colter brother.  Unfortunately, trouble finds her in the form of Tate Colter rather than Marcus. The youngest Colter brother is arrogant, cocky, smart, and tenacious in his attempts to find out why she wants to find Marcus even though she’s never met him. Lara isn’t willing to divulge that information, and Tate is determined to uncover her motives.  It makes Tate one hot, wickedly sexy, adorably dimpled, alpha male pain in her backside.
Lara is really confused when Tate helps her out of a difficult and potentially dangerous situation. It leaves Lara wondering if he really is the cocky, arrogant jerk that he pretends to be, or if there isn’t much more to Tate Colter than she’d initially thought.
Tate Colter wants Lara Bailey in his bed…badly.  When she completely blows him off and ignores him when they meet, he’s even more determined to find out her secrets and get her to submit to the molten desire that radiates between the two of them. The fact that she’s one tough female, a woman who can give back exactly what he dishes out, makes her even more intriguing to him.
Sparks fly as Tate and Lara become involved in a battle of wits and wills that will ignite flames of passion and desire like neither one of them have ever experienced.  But when deception is discovered and a betrayal takes place, can these two adversaries who are so much alike work together without letting the white-hot passion burning between them incinerate
them both?

Other books in the series

Jason Sutherland is a billionaire investor who has it all: good looks, billions of dollars, and every expensive toy a man could ever want. What he doesn’t have is the one thing he wants the most: Hope Sinclair. Unfortunately Hope, the little sister of his best friend, was off
limits. But when he finds out that she’s getting married, he decides that he’s staking his claim before it’s too late, and it will take more
than a little deception and risk to accomplish his goal. Hope could end up hating his guts, but after spending one forbidden night with her that he can’t forget, he knows he has to try to make her his forever.

Hope Sinclair was born into money, but being rich has never made her happy. The one thing she wants is a man to care about her and not her bank account. The closest thing she’s ever found to real happiness was the magical, passionate night she’d spent in the arms of Jason Sutherland…until that night turned into heartbreak. So when he unexpectedly comes back into her life in the strangest of ways, Hope is determined to resist her attraction to him.

Thrown together by Jason’s deception and with their passion still burning hot, can the two of them survive after the billionaire is unmasked?

18+ only. Not suitable for children and teens under 18.