The sins of the father. The burden of the son.

Unloved by Katy Regnery is LIVE!

My name is Cassidy Porter…

My father, Paul Isaac Porter, was executed twenty years ago for the brutal murder of twelve innocent girls.

Though I was only eight-years-old at the time, I am aware – every day of my life – that I am his child, his only son.

To protect the world from the poison in my veins, I live a quiet life, off the grid, away from humanity.

I promised myself, and my mother, not to infect innocent lives with the darkness that swirls within me, waiting to make itself known.

It’s a promise I would have kept…if Brynn Cadogan hadn’t stumbled into my life.

Now I exist between heaven and hell: falling for a woman who wants to love me, while all along reminding myself that I must remain… 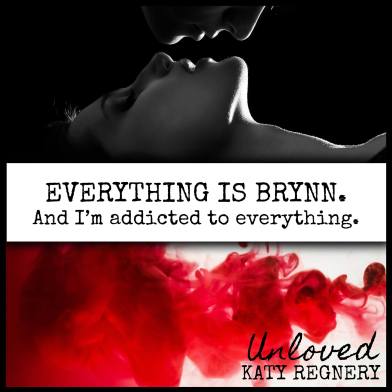 I enjoyed Unloved. Katy Regnery really hurt my heart when it came to Cassidy Porter. Gods, I honestly wanted to give him a hug and never let go every time it was his POV chapter as he’d had a seriously messed up life until meeting Brynn.

The premise of the book/blurb does make it sound like a darker read that it is and while it touches on some dark subjects – albeit very lightly – it in the main deals with emotions and feelings of loss, isolation and the sadness and solitude that comes with never really knowing love.

Cassidy’s dad was convicted of some horrendous crimes and as a result Cass, as a youngster, was led to believe that he was gonna end up just like his father, he was told he had to live ‘a quiet life’ away from others and be good, so that’s exactly what he did…. reading about his solitude and belief that he was a monster in the making was so sad.

Brynn Cadogan was mourning the loss of her beloved fiance and while it was sad, I honestly felt that now, as two years had passed, she should be moving on and starting to live life again, so I did find it slightly difficult to connect with her emotions at the start of the book. One difficult conversation she had – with a fleeting supporting character – seemed to make her, thankfully, see reason and had her starting to think about living life again rather than grieving. She was a likeable main character and brought out a side to Cassidy that was so different to the poisonous beast he believed lived inside him.

Cassidy and Brynn come together when he rescues her and takes her to his home to recover and heal. I liked the slow build up of their relationship and feelings, the trust that Brynn placed in Cass – through the read I was willing him to start seeing what Brynn did, to believe in himself and stop sabotaging his chance of finding happiness.

Events seemed to happen over a fair amount of time but when I found out how long it had been since they ‘met’ I was surprised that such a short period of time had elapsed.
The twist towards the end was a little too contrived in my opinion; while it made for a nice HEA, I kinda felt it was all a little too neatly wrapped up.

Those couple of points aside, it was a good read that I finished quite quickly as I wanted to know how things would work for the pair. I liked the epilogue – though it would have been grand to see them a bit further down the line – and I’m looking forward to what Ms Regnery has planned next!!

New York Times and USA Today bestselling author Katy Regnery started her writing career by enrolling in a short story class in January 2012. One year later, she signed her first contract and Katy’s first novel was published in September 2013.

Katy’s first modern fairytale romance, The Vixen and the Vet, was nominated for a RITA® in 2015 and won the 2015 Kindle Book Award for romance. Katy’s boxed set, The English Brothers Boxed Set, Books #1–4, hit the USA Today bestseller list in 2015, and her Christmas story, Marrying Mr. English, appeared on the list a week later. In May 2016, Katy’s Blueberry Lane collection, The Winslow Brothers Boxed Set, Books #1-4, became a New York Times E-book bestseller.

In 2016, Katy signed a print-only agreement with Spencerhill Press. As a result, her Blueberry Lane paperback books will now be distributed to brick and mortar bookstores all over the United States.

Katy lives in the relative wilds of northern Fairfield County, Connecticut, where her writing room looks out at the woods, and her husband, two young children, two dogs, and one Blue Tonkinese kitten create just enough cheerful chaos to remind her that the very best love stories begin at home.

Signed paperback copies of this book can be ordered here: