Lucas Barnett and Gabriel Stewart didn’t have it easy as kids. They were only trying to deal with bad situations at home when they became lifelines for each other. Their pipe dream was to someday meet in LA, where Lucas would design skyscrapers, and Gabriel would learn to fly. But then Gabriel disappeared without so much as a goodbye, and Lucas got himself in trouble with the law.

Five years later, both men are at a loss when they run into each other at a Hollywood bar. Lucas is still angry, but it’s not as if Gabriel could control how his mind and body had betrayed him. Being found on the ledge of that bridge had changed everything.

The attraction is immediate, but it’s more than their inability to keep their hands off each other. Neither man expects the fierce connection pulling them together. Unfortunately, ignoring their problems doesn’t make them disappear. Gabriel’s internal struggles are serious…dangerous. And no matter how much Lucas wants it to be true, saving Gabriel won’t make up for not being able to save his mom. If they don’t find the strength to face their own demons before the darkness takes hold, they risk more than just losing each other forever. 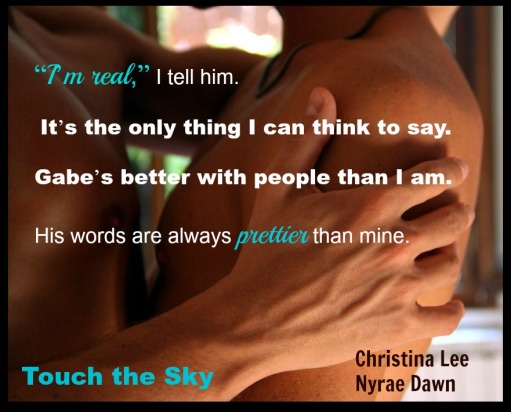 His eyes soften and he exhales a hard breath as if we’re finally on level ground. I feel giddy with relief and contentment as I clutch at his hand and drag him to the dance floor. At first he protests about his drink but then he places it in an empty spot on a ledge.

It’s a pulsing rap beat and my body feels like a live wire. My hips start swaying, my hands rise in the air, and the vibration of the music takes over. Lucas has no trouble keeping up with me, though not with as much enthusiasm.

“Fuck, you’re sexy,” he rumbles in my ear. I feel his hips gyrating as he grasps my waist and slides up behind me. His hard length is digging into my ass and that only spurs me on more.

After a few numbers, I follow Lucas to the back wall where we find a spot to rest between other couples swaying to the music. He pins my shoulders against the column, his breath heavy, eyes glazed over with lust, as his lips crash against mine.

My fingers reach for his waist but he grabs hold of them and raises my hands above my head as he bites my lips, licks into my mouth and then sucks on my tongue. Holy fuck, if we weren’t in a public place I’d ask him to pound me straight into oblivion.

“I didn’t know you could dance like that,” he rasps against my cheek as he releases his grip on my hands.

His fingers connect with my neck and he hauls my lips to his again. His tongue digs deep in my mouth and I groan shamelessly as I grab on to his hair and pull him flush against me. I’m so thoroughly turned on that my eyes practically roll to the back of my head.

He drags his mouth away and licks along my jawline up to my ear as he arches his hips into my groin. “You’ve got me so goddamn hard.”

“Yeah?” I ask, gasping against his neck. “Well, I know how to take care of that. Remember, you’ll need to beg.”

He laughs and kisses the side of my head. “Not here. I’d rather have you in my bed tonight.” 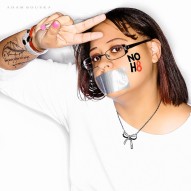 Nyrae Dawn can almost always be found with a book in her hand or an open document on her laptop. She couldn’t live without books—reading or writing them. Oh, and chocolate. She’s slightly addicted.

She gravitates toward character-driven stories. Whether reading or writing, she loves emotional journeys. It’s icing on the cake when she really feels something, but is able to laugh too. She’s a proud romantic, who has a soft spot for flawed characters, who make mistakes, but also have big hearts.

Whether she’s writing young adult, new adult, or adult you can always count on a healthy dose of romance from her books. She likes to tackle tough subjects, and believes everyone needs to see themselves in the stories they read.

Nyrae is living her very own happily ever after in California with her gorgeous husband (who still makes her swoon) and her two incredibly awesome kids.

Once upon a time, I lived in New York City and was a wardrobe stylist. I spent my days shopping for photo shoots, getting into cabs, eating amazing food, and drinking coffee at my favorite hangouts.

Now I live in the Midwest with my husband and son—my two favorite guys. I’ve been a clinical social worker and a special education teacher. But it wasn’t until I wrote a weekly column for the local newspaper that I realized I could turn the fairytales inside my head into the reality of writing fiction.

I write Adult, New Adult, and M/M Contemporary Romance. I’m addicted to lip gloss and salted caramel everything. I believes in true love and kissing, so writing romance novels has become a dream job.